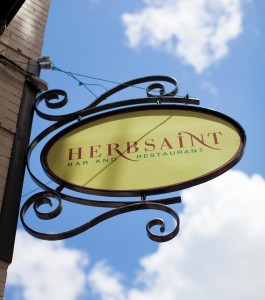 “Herbsaint is where it all began for me,” said Link. “It has withstood the tragic aftermath of September 11, Hurricane Katrina, Gulf oil spills, a recession, a restaurant fire and now we are in the midst of a pandemic. Through it all and together, we have continued to share our passion for food and grow our family of restaurants. I’m proud of what Herbsaint has become, and I look forward to the next 20 years.”

Herbsaint was the first restaurant in the Link Restaurant Group, now comprised of seven restaurants scattered throughout the Warehouse District and Uptown New Orleans, and the only restaurant to have appeared on The Times Picayune’s annual list of 10 Best Restaurants since the list began in 2003.

For the celebration, Chef de Cuisine David Rouse has composed a series of specials incorporating original favorites such as Shrimp with Green Chile Grits and Tasso Cream Sauce; Rabbit Pappardelle with Artichokes, Mushrooms and Marsala; Grilled Flatbread with Fennel Sausage, Jalapeño and Provolone; Post-K Meatloaf with Mashed Potatoes; and Pan Roasted Salmon with Lentils and Ravigote.

“It’s an honor to lead the kitchen of Herbsaint,” said Rouse. “Building on the relationships Donald has made with local farmers and fishermen has made it possible to offer menus that showcase the best of what’s available throughout the year and that also support the local economy. We welcome locals and visitors alike to come in and have a taste of the past and present.”

For 20 days, beginning Oct. 14, Rouse will offer three nightly specials reminiscent of the dishes served over the past 20 years.

Herbsaint earned Link a James Beard Award for Best Chef South in 2007; Rebecca Wilcomb, who now leads the kitchen at Gianna, was honored with the same award in 2017. Stephen Stryjewski, chef and business partner in Link Restaurant Group, and Chef/Partner Ryan Prewitt of Peche – both James Beard Best Chef award winners themselves – also spent time in the kitchen of Herbsaint before leading other kitchens in the restaurant group. The restaurant has been recognized by Eater National as one of “The Best Restaurants in America” (the 38 restaurants that defined dining), has been added to the Fine Dining Hall of Fame by Nation’s Restaurant News, as well as listed as a Top 50 Restaurant in America by Gourmet Magazine.

For more information and reservations please visit www.herbsaint.com or call (504) 524-4114.