It’s a family motto of sorts for Ti Martin. She heard those words often from her mother, “Miss Ella” Brennan — the groundbreaking restaurateur and Brennan family matriarch who passed away on May 31, 2018 — and she repeats them to her team members often.

Martin credits that approach for the success of the Commander’s Palace family of restaurants (Commander’s Palace and SoBou, which Martin runs with cousin Lally Brennan, and Brennan’s of Houston, led by Martin’s brother Alex Brennan-Martin). It’s also driven her to pile an already full plate with new challenges: the New Orleans Culinary and Hospitality Institute (NOCHI), of which Martin is board chair and co-founder, welcomed its first students this past January and Picnic Provisions & Whiskey, a more casual spot in Uptown New Orleans that she co-founded with Commander’s Palace chef Tory McPhail and local restauranteur Darryl Reginelli, opened Sept. 10, 2018.

The other thread that runs through Martin’s projects is a fanatical belief in the importance of hospitality and the role New Orleans can play in spreading this gospel. Biz New Orleans sat down with Martin recently to discuss the importance of this industry to the city and what’s needed to keep it, and its increasingly diverse workforce, thriving.

Though you grew up immersed in the restaurant business, you didn’t join right away. What finally swayed you?

The truth is, mom discouraged me from being in the business. She said, ‘Go learn how to take care of yourself, kid.’ So, I got an MBA and was in the real estate industry in California, then Houston. It was great experience, but I quit that business when it seemed to me those people weren’t acting very ethically. My Aunt Dottie had gotten a radio station in a divorce. Because I had an MBA and had worked for a while, she thought I was eminently qualified to go and run it. So I did, and in the midst of that, she called me and said, ‘Your mama’s going to have heart surgery tomorrow.’ On the drive from Texas to New Orleans, I asked myself, ‘What are you doing, idiot? When are you going to go work with your best friend and mentor?’ So, I came home. My mother, of course, was perfectly fine. But I had gone away and done my thing, and I wasn’t about to waste any more time.

I do not know what normal girls talk to their mothers about, but my mother and I have always talked about business because we think it’s the most exciting thing in the world. That’s what our relationship was like from beginning to end — though we did have a good time together too.

It’s remarkable that Commander’s Palace continues to be recognized in such a high-profile way. What do those accolades mean to you?

It’s much harder to stay there than to get there. But that’s the thrilling part. It’s all about keeping the standards up and pushing, pushing — it takes an extraordinary amount of energy to do that. You can see how people rest on their laurels, but ooohhh, that makes me crazy nervous. I hope it never happens around here. People can only name about four favorite dishes at Commander’s Palace, the rest change all the time. I believe that’s how we stay relevant.

I once heard a restaurateur in New Orleans say, ‘If I just get every tourist once, I’ll be fine.’ That is the opposite of anything we feel, believe or admire. We feel like if we really take care of the locals and make them want to come back, everything else will happen naturally. We’re as good as the last meal we served. Period. We’ll take all the awards they’re giving out, but that’s what really matters.

Picnic Provisions & Whiskey is a stylistic departure from Commander’s. What have you learned from that project?

Picnic is the brand-new baby we’re crazy about. A modern corner neighborhood restaurant that we call ‘fast fine.’ We have service — that’s a very important element — and the cutest little bar in America. I’ve gotten a lot of advice from people I admire in the industry. When we first started Picnic, I called up Cheryl Bachelder, the former CEO of Popeyes, and said, ‘Cheryl, we can’t make the fried chicken fast enough! I need some advice on systems.’ My entire life is one giant collaboration. Anybody who thinks they’re doing any of this stuff by themselves is an idiot. But we’re having a blast with it.

At the same time, you were launching NOCHI – what drew you to that project?

A lot of us have tried to do a culinary school for a long time but were always stymied by money. [Once we found the building], we just started swinging for the rafters and put together a team… and here we are. We found a way because the industry and the city got behind us.

This thing is going to be what the industry wants, a lot of which involves taking young people and making them into managers. Certain jobs in the restaurant industry are entry-level jobs you’re not supposed to be doing when you’re 50 or 70. If you have some get up and go, you can make it in my industry. A lot of what NOCHI does is get you from the entry-level job further up the line.

How can NOCHI help promote New Orleans as an industry leader?

My No. 1 passion in life is the arena of hospitality. I feel New Orleans is particularly well suited as a city to teach that. We’re not as good as we need to be, but we’re better than most other places just naturally. I’d love people to think, ‘I need somebody to come speak to people about hospitality, I want to send my management to learn about hospitality… what about that place in New Orleans?’ If every time someone thought about hospitality they thought about New Orleans, that would be a real gift we’ve given our city.

One of my mom’s dreams that I’ve inherited is that New Orleans be the Paris of America, and I think we can do that. But we have to keep it going because now other cities in America — like Chicago and many others — are nipping at our heels. We have the product restaurant-wise. We needed the school, and we need to keep marketing it. Everything is about pushing hospitality.

Your mother was a pioneer as a woman restaurateur. How did her example shape your approach to this business?

I’m of two minds about the whole thing. One of them is ‘just get over it and go do your job.’ Because that’s what she did — it’s not something she thought about day to day. She just was going to lead.

However, I find myself very focused and interested in helping young women get ahead. I do think there are very real obstacles. The ‘Me Too’ movement was way too long in coming. It’s pretty damn exciting to see.

I certainly have a bunch of folks I’m trying to mentor – I’m a big believer in that. I think young people don’t have enough people to talk to about their career and life decisions. We have something at Commander’s called Aqua Blue U — classes we put on, many of them on industry [topics]. A lot of [our team members] want to own their own restaurant, and I’m like, ‘Good! Let me show you how.’

I would also say being a woman has affected my management style. When I say my whole life is one big collaboration, that’s partly because I’m a woman. I like to surround myself with the best people I can and get input from everywhere I can. That’s one of the first things you teach a young cook. You think you’re macho not asking for help, but then the whole line goes down because you didn’t ask. If you can learn that early enough, it’s a big help.

How do you think New Orleans is doing as an incubator for women in the industry?

I think it’s very important to form relationships in the industry, and you learn from each other. I felt like I had to be involved in all of those organizations because there were so few of us [women], and now I see the next crop in the city coming along and I’m thrilled about it. I finally see a wave, and it’s been a damn long time coming. I just want to stand over here and applaud and help however I can.

At some point, will we max out on the number of restaurants in New Orleans?

But what is thrilling for me — one of the best darn meals I’ve had lately was on Broad Street [at Marjie’s Grill]. I’m excited because they seem to be serious about the hospitality end of things too. You get these young whippersnappers who say, ‘We want to cook what we want to cook,’ and they find a building they can afford — which is brilliant – and they have to be so good that they can draw people there. I think that is the sign of the most lively restaurant scene we’ve ever had, with the most depth. I always thought we were sort of idiot savants here — we did one thing really well, but we never had any great ethnic food or any kind of variation. And now we’ve got it all. Sure, it’s all competition, but I’ve always found it makes us all better. Don’t get me wrong, the labor market is tough and it does make things a few notches harder, but it’s thrilling.

Fun fact
As a high school student, Ti Martin convinced the administration of Isidore Newman School to create a girls’ volleyball team. Since then, Newman has won 17 state volleyball championships. 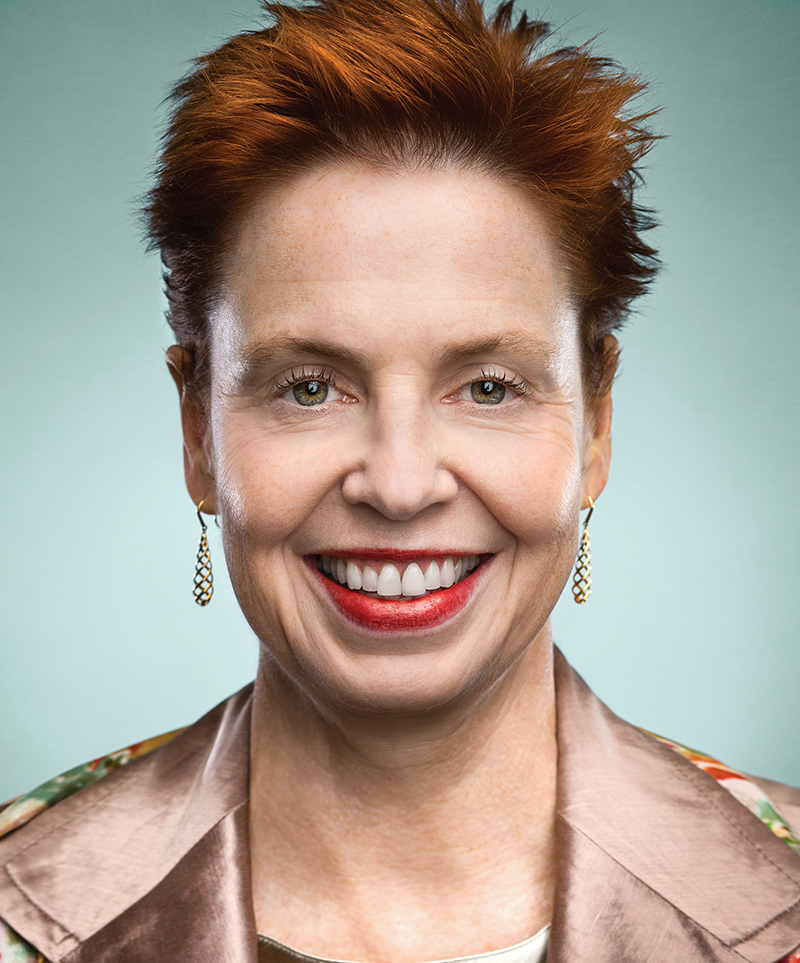 Favorite book: “Uncommon Service: How to Win by Putting Customers at the Core of Your Business” by Frances Frei and Anne Morriss. It goes way beyond just our industry – I’m making my whole team read it.

Favorite TV show: Mom and I would have a Sunday night date to watch “Madam Secretary.” She always liked politics, and we both have a belief in something called the common good. That’s an unusual saying in today’s world, but that show appeals to that ideal.

Who do you look up to? My mentor Joe Henican; all my “moms” – including the amazing group of aunts who helped raise me; my cousin Lally; my chef Tory McPhail. I’m also quite fond of our governor – he’s an exceptional human being.

Biggest life lesson learned: The most important thing is integrity. Period. The common good. If you don’t have that, what do you have?

Best advice ever received: One thing my mom taught me was: ‘There are a lot people who spend their lives trying to avoid hard work. I don’t really know anybody who really tried to succeed without working hard. Make this business part of your lifestyle and enjoy it.’

Hobbies: A weekly game of early morning pickleball with my two best friends. I play golf. I love picnics – especially with a bottle of wine at sunset. I love restaurants – eating in them, reading about them, writing about them… I’m either in mine or somebody else’s.

Daily habits: I exercise every day. It puts me in a good mood, and at this age you need to anyway. I read. And I try to sneak in something somewhere along the way with a friend.

Pet peeve: Servers who take your food before you’re done.

What you are most looking forward to in the next year: To NOCHI and Picnic thriving and working on some other hospitality projects.

Inducted into Culinary Institute of America Hall of Fame (2008) 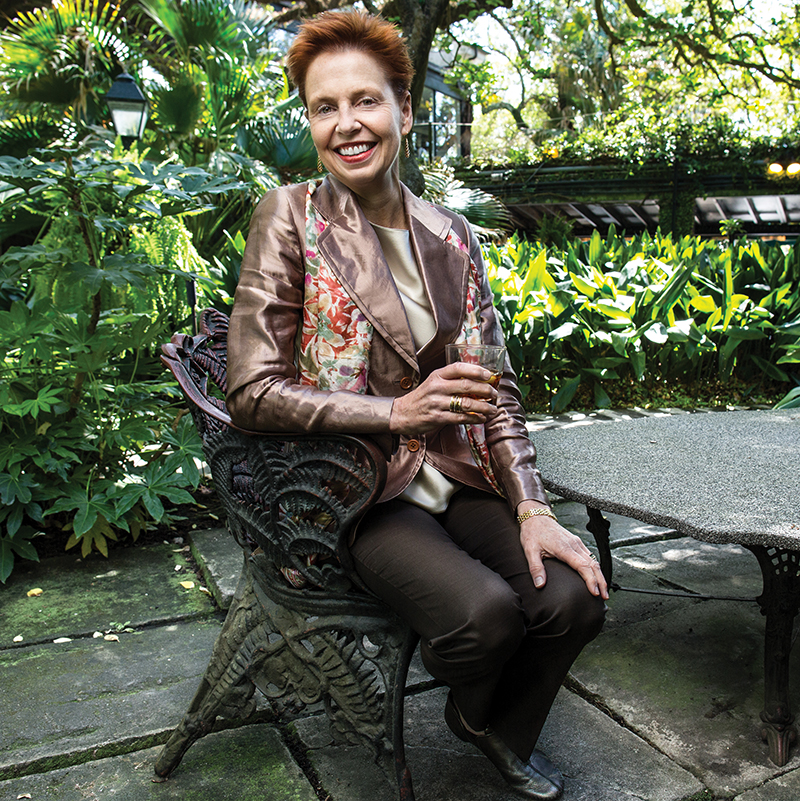 Combine all the ingredients in a cocktail shaker with ice and shake vigorously. Strain into a rocks glass filled with ice. Garnish with a light dusting of freshly grated nutmeg and serve immediately.

2012 SoBou opens in the French Quarter