Inside the local company’s rapid growth and monumental acquisition 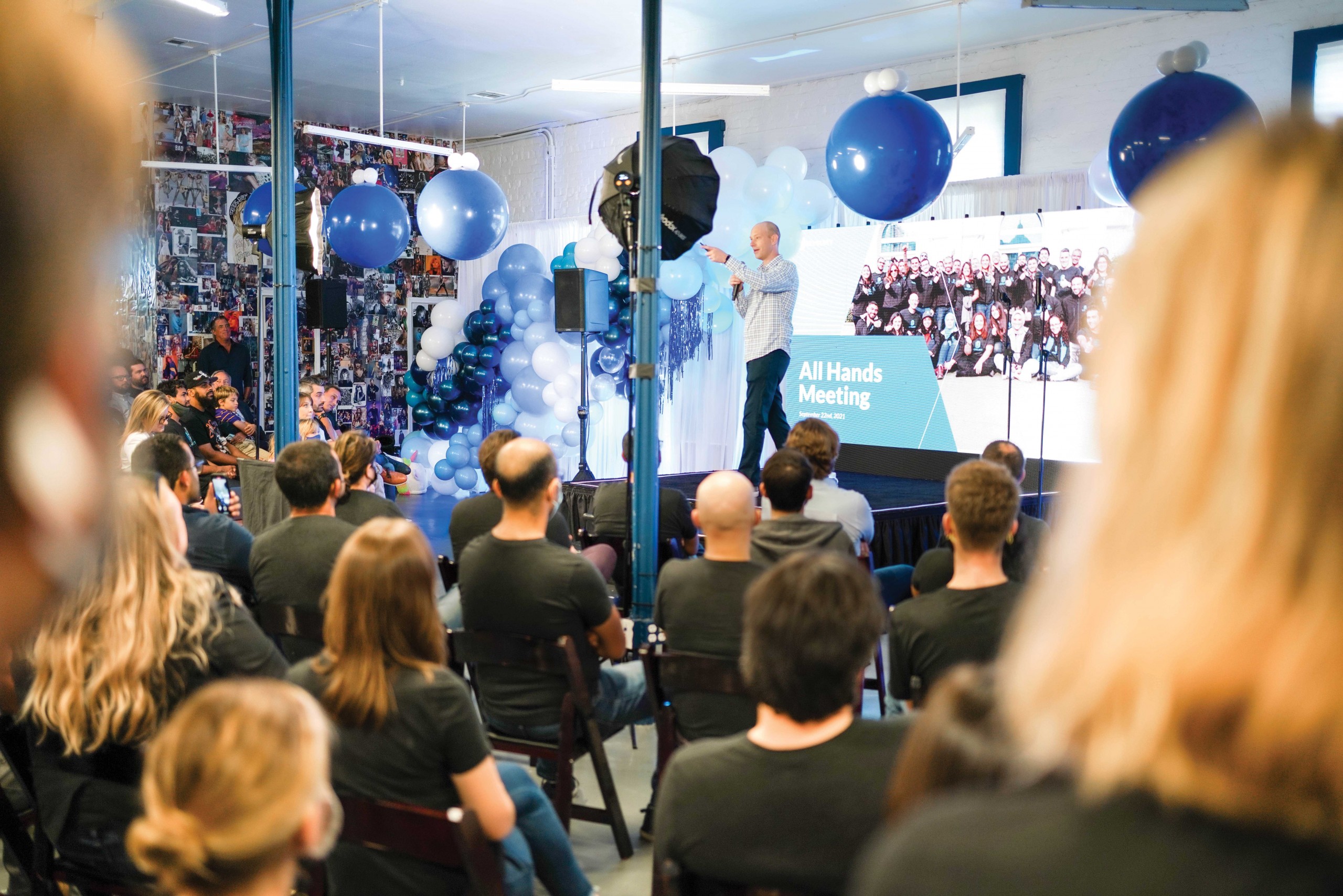 Scott Wolfe, Jr., Levelset’s founder and CEO, announces to staff in September that Procore signed a definitive agreement to acquire Levelset for $500 million.

During the aftermath of Hurricane Katrina, Scott Wolfe, Jr.—a licensed attorney who previously practiced construction law—witnessed firsthand the challenges contractors faced when it came to getting paid. The New Orleanian searched for solutions to solve payment inequities in construction and set the foundation for what is now known as Levelset, a software company used by thousands of contractors and suppliers nationwide, to make construction payments easier and more predictable.

“Payment in construction is dramatically different than it is in any other industry, where you want to buy something, and you give them money, and you get that good or service right away,” says Gretchen Lynn, Levelset’s vice president of customer experience. “Whereas in construction, you could wait up to 80 days before you get payment. And if there are people who you have to pay, if there are supplies you need to buy, it’s a complex, unfair process across the board for everybody involved.”

This past fall, the company was acquired by Procore, a market leader in construction project management, for $500 million. At the time, the acquisition of Levelset represented the largest venture capital-backed outcome in Louisiana (until local tech firm Lucid sold for $1.1 billion in October). On a national level, Levelset’s sale is the second largest venture-backed construction software exit.

The company has experienced rapid growth since its establishment, and while founding employees joke this has led “to literal gray hair,” they would not have it any other way, nor in any other setting aside from New Orleans.

In November of 2011, Scott Wolfe, Jr. launched zlien, a corporation that helps “supply and construction companies” reduce their credit risk and default receivables through the management of mechanics lien and bond claim compliance. A little less than two years later, Wolfe joined The Idea Village’s central class of entrepreneurs-in-training.

As the winner, the zlien team traveled to San Francisco on a TPG Capital sponsored trip and met with potential venture investors, including Altos Ventures, which funded zlien’s Series A round with $5 million.

“I think the asterisks on the Idea Village experience was, number one, getting Scott to dream a little bigger than maybe what he would have otherwise dreamed,” says  Martin Roth, Levelset’s chief revenue officer. “And then number two, opening up the idea that we could take outside capital and grow this thing inorganically to be a big opportunity. It planted these seeds for a vision that we ultimately set out to go build.”

In 2015, zlien incorporated software group, ZLABS—based in Cairo, Egypt—and continues to operate from those offices today.

“I’ve worked with Scott since 2008, on the very early prototypes of what later became zlien and then later Levelset,” he explains, noting that more than half of the company’s engineering team members currently work in the Egyptian capital. “When the company was founded officially in 2012, we started to hire people full time in Cairo to help with the software development for zlien.”

Younis says that even before the pandemic, when Zoom became a part of everyday life for most folks, Levelset possessed a strong videoconferencing culture.

“We’ve always been very inclusive, figuring out how to make sure that people in different geographies, and from different cultures, are included in everything that we do,” he says.

During that time, employees from Cairo would visit New Orleans—and New Orleanians would head east—resulting in a rich cultural exchange between two offices, nearly 7,000 miles apart.

After acquiring controlling interest in ZLABS, zlien continued to expand in New Orleans—and further into the United States.

In January of 2017, zlien announced a $10 million Series B round of financing led by Austin-based S3 Ventures with support from return backers Altos Ventures and Brick & Mortar Ventures, among others. In June 2018, it opened an office in the Texas city.

“We started the Austin office because we were raising capital from an Austin-based venture capital firm, and so there was kind of an anchor there,” says Bradford Walker, Levelset’s chief financial officer. “Austin has a lot of tech talent, and so as we continued to grow and were looking for more talent, Austin was a great place to find that.”

While expanding on an international level, zlien deepened its NOLA roots.

In the spring of 2019, the corporation opened a second Lower Garden District office—this time on Magazine Street. (The first office is situated on Josephine Street.) At that point, zlien rebranded to Levelset and crossed the 100-employee milestone.

The founders of Levelset say the Crescent City played a key role in facilitating the corporation’s growth, partially because the original employees were, put bluntly, inexperienced, which ultimately contributed to a resilient company culture in which all players were focused on constantly learning and problem solving.

“We were able to be very scrappy in how we approached the business, and I think that set in a culture and an operating style that is still very much a part of our organization today,” says Roth, adding that the cost of living is inexpensive in New Orleans, in comparison to other metropolitan areas around the country. But still, he says, scaling in New Orleans hasn’t always been a smooth journey, and the company had to tap into tech hubs like Austin, Texas to recruit higher level talent.

“Recruiting people to New Orleans can be a challenge,” Roth says. “As you scale, and you get to 150, 200 employees, you start looking for people who have experience running a sales team, a customer success team, or an engineering team. We needed to tap into a different talent pool to get employees who already knew how to do a certain thing. We had coached a lot of people into their roles, but you can’t scale forever by coaching everybody up in the role.”

“If we were founded in a place like San Francisco, or some other tech hub, our culture would probably have been very different,” he says. “But scarcity breeds resourcefulness. And we didn’t have the abundance of skills and experience in the city, so we have to resort to other things, like grit and resilience.”

In August of 2021, Levelset continued its rapid growth and crossed the 300-employee milestone. The company successfully scaled to meet the demand.

“As we continued to build, we saw more products to build,” says Walker. “As we build more pieces, our eyes and our ambition get bigger. We start hiring people to work on the data in new and bigger ways. Growth begets growth.”

“As we work in it, we continue to see that there are still more opportunities, so we continue to expand the scope of what we’re working on,” he says.

“To have this really big ambition to take on a really huge opportunity, requires an incredible amount of sheer belief and faith,” Walker says. “That is the nature of what we’re doing. We’re supposed to go uncomfortably fast. And we know that sometimes we’re going to get things a little bit wrong, but we’re mostly going to get it right.”

Roth describes his eight-plus years with Levelset as a “never-ending cycle of professional challenges and accomplishments; getting better at skills and taking on more responsibility.”

Levelset’s acquisition by Procore, for example, marks the start of a new experience.

“What we do is very different from what Procore does. There’s not much overlap between our solutions,” Roth says. “We have a lot of opportunities under that umbrella to expand our reach, serve more customers, and build more products.”

Levelset will continue to operate as is, with the goal of hitting revenue targets, scaling teams, and growing, before officially merging with Procore—likely in 2023. But even then, they will not leave New Orleans behind. If anything, they will help the city prosper.

“We look at this as a catalyst for the New Orleans tech ecosystem,” says Roth. “Hopefully we can accelerate more companies getting funded here and scaling here. We’re not going anywhere. We’ll continue to hire another hundred people or so in New Orleans, over the course of the next year. That’s a commitment to the city.”