Both restaurants and business organizations benefit from “steady dates.”

If it’s Tuesday at 8:30 a.m., you can count on finding Jude Heath at Andrea’s Restaurant. Heath belongs to the New Orleans Wealth in Networking chapter of Business Networking International (BNI), and the club’s 50-plus members meet every Tuesday morning at Andrea’s to enjoy a hot breakfast, to chat and to carry out business.

Hosting standing breakfast, lunch and dinner meetings is smart business for restaurants like Andrea’s. It gives the eateries both a steady source of income and a way to spread the word about their food. For their part, organizations benefit from the continuity that comes from holding their meetings at the same place each week or month. There’s no worrying about whether the host restaurant has enough chairs or suitable AV equipment, and they can count on members enjoying the food.

Heath said his group wanted to meet at a white tablecloth restaurant that could provide a full breakfast for members and their guests. “You need something more than a cafeteria,” he says. He says his club likes working with Andrea’s because it is locally owned. “Dealing with a large, national chain restaurant can be a little more complicated,” he says.
Wealth in Networking prefers breakfast meetings so members can go straight to work. “Lunch meetings chop up the day,” Heath adds.

According to Tia Sommerville, sales director and general manager for Andrea’s, the restaurant has a fair number of regular groups, thanks surely in part to the fact that its five private rooms can open to a grand ballroom, giving Andrea’s the ability to accommodate groups from 30 to 350-400.

Of course space and ambience are important, but since this is New Orleans, most groups put a high premium on what’s on the plates. “We’re known for our fish,” Sommerville says. “We make our pasta fresh in-house.” 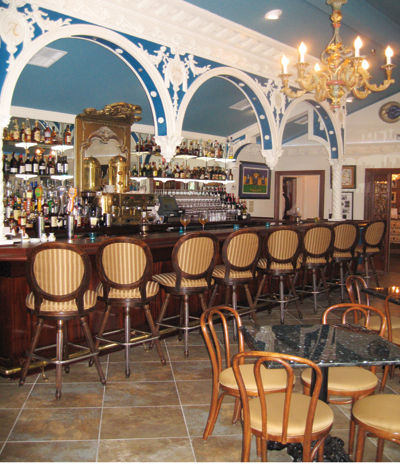 Ralph’s on the Park

At Ralph’s on the Park, private events make up 42 percent of the revenue stream, according to General Manager David Hart. For that reason, Ralph’s has separate private dining menus and a dedicated events staff. Most of the private events held at the restaurant are one-time affairs, but some groups do have standing dates, Hart says. Parties and meetings are usually held upstairs, where the restaurant has several rooms.

Hart attributes Ralph’s popularity to a number of factors, including its convenient location, beautiful City Park views and varied cuisine. Ordinary “banquet food” might fly in some cities, but local diners expect to dine well, whether at a club meeting or a wedding reception.

The Corporate Connection – Executive Connections chapter of BNI has met at Ralph’s on the Park every Wednesday at 8 a.m. for four years. Holly McCollum, president of the chapter, says members like being able to invite guests to a well-known restaurant like Ralph’s for their weekly meetings. “The restaurant always provides an elegant breakfast,” McCollum says. 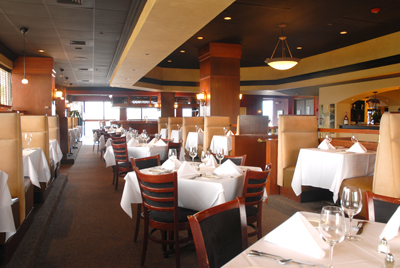 Criollo at the Hotel Monteleone

According to Kent Wasmuth, director of sales and marketing at Hotel Monteleone, hosting a standing group is an effective way for restaurants to market themselves to business people. The Monteleone’s Criollo restaurant features a main dining room that seats 70, as well as two private dining rooms that seat 18 and 16. Wasmuth notes Criollo’s open-air kitchen, expansive windows and farm-to-table cuisine are all part of what makes it an ideal place for business lunches.

Accommodating guests’ preferences is all in a day’s work for a hotel, Wasmuth says, so catering to a private party’s wishes is never a problem. Criollo menus emphasize Louisiana foods, and change seasonally. 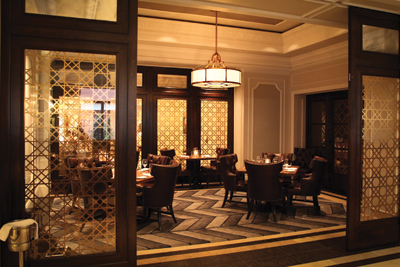 Criollo at the Hotel Monteleone offers a main dining room that seats 70, as well as two private dining rooms that seat 18 and 16.
-Photo courtesy of Criollo

Business people usually don’t have time to linger over lunch, so clubs have to pick a restaurant that can get their members in and out efficiently. That’s one reason the local chapter of the American Business Women’s Association holds its monthly lunches at Ralph Brennan’s Heritage Grill.

“They do a phenomenal job,” says ABWA President-elect Rachel Nunez. “They know our schedule.”

Members can select from a choice of entrees when they register online, and vegetarian dishes and salads are available. Nunez says the food comes out quickly as each program begins, and desserts and coffee are usually served before the speaker is finished, so by 1 p.m. members are ready to head back to work.

According to Melissa Ursin, director of catering and sales with Ralph Brennan Catering, a great meeting restaurant is stocked with more than just good food and efficient staff.
“Heritage Grill is an easy fit for meetings because it is well supplied with all the audio-visual equipment a group could need,” she says. The restaurant also has plenty of parking, both covered and surface, and is easy to reach from the CBD or Metairie.

Ursin says on the restaurant’s side of things, building relationships with clubs is a way to fill space at a time that might normally be slow. Club members impressed by their weekly or monthly lunches are also more likely to book dinners, showers, and other events at the restaurant.

The Association for Corporate Growth Louisiana (ACG), a resource group for professionals in mergers and acquisitions, has held its monthly lunches at the Blue Room in The Roosevelt Hotel for two years.

“We like having it at a hotel rather than a restaurant,” says Executive Director Christie Andras-Royster. ACG’s meetings run from 11 a.m. to about 1:30 p.m. To save time, the group has the salad and dessert pre-plated, and beverages are already in place when members arrive.

“The hotel always has a gluten-free and vegetarian option available,” Andras-Royster says, adding that members like the Downtown location since many work at Place St. Charles or other CBD buildings.

The opulence of the Blue Room is a big draw, too. “The room is so magnificent,” she says. “It adds an elegance to the luncheon.”

Formerly a popular supper club, the Blue Room is available for private parties, including meetings, weddings and all types of corporate events, says Sebastian Stutz, director of operations at The Roosevelt, noting that the hotel’s size and experience mean it can handle just about any request. 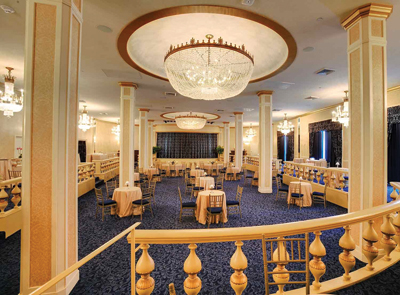