Let There Be Light

Cream, bright white and gray permeate surfaces of the offices at the Nora Vaden Holmes State Farm agency in Metairie. Fleetwood Mac is playing over the sound system and a customer — seated on a bench custom built by Ian Dreyer, principal architect of the company’s design firm, NANO, and upholstered with metallic naugahyde by Romo Group — fills out paperwork. Most days, Nora Vaden Holmes’ six-year-old King Charles Cocker Spaniel mix, Baxter — a rescue from Animal Rescue New Orleans — greets visitors at the door. This is not your average insurance and financial services office.

“I wanted it to be bright, light and airy,” says Holmes. “I didn’t want any dark wood.”

Prior to Hurricane Katrina, Holmes’ offices were on Airline Drive by Rouse’s. Flooding caused the company to find a temporary space, which Holmes describes as dark and dated. She bought the property the offices are currently located on at Metairie Lawn after the hurricane, but due to termite infestation and rot, wasn’t able to complete her plan to repurpose the existing structure.

The brick and stucco building she contracted was finished in 2009, but Holmes received and accepted a request to lease it out. Once the leases ran out, Holmes said she finally had a clear plan of what she wanted for the space. 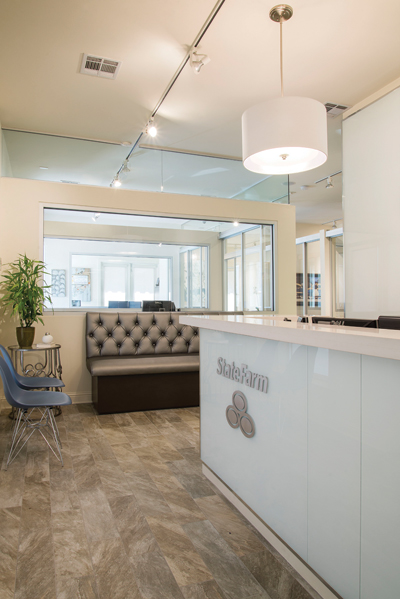 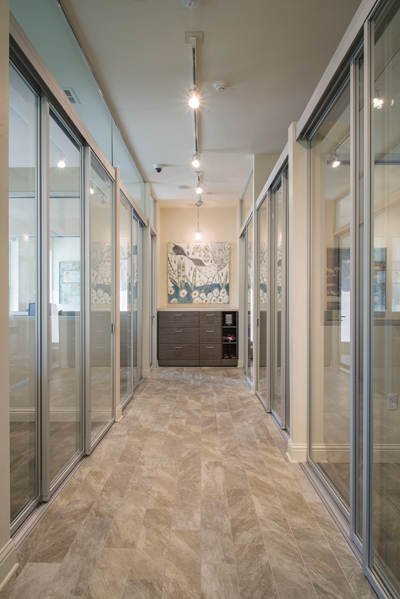 “I looked at other State Farm offices and thought, ‘I don’t want to look like an insurance office’,” says Holmes. “I started looking at Google and cool offices in Norway … I kind of came into this thinking I could do this on my own.”

Holmes quickly recognized she’d need help grappling with 3,000 square feet of space in need of a massive reconfiguration and redesign. To help bring her vision of a contemporary, bright, state-of-the-art space to fruition, she hired her client and one of NANO’s owners and founding partners, Terri Dreyer, for the project with the help of Martha Pearson, interior designer with the firm.

“The biggest challenge is the square footage,” says Dreyer. “Our goal was to make sure she had an open, airy and pleasant environment that could be interchangeable.”
Since the space was already built out, the team reconfigured it and better incorporated the upper and lower levels. From November 2014 to April 2015, they worked on designing, planning, construction and finish out.

The conference room soon became a design challenge, because Holmes kept requesting more and more space on the upper floor for the footprint. 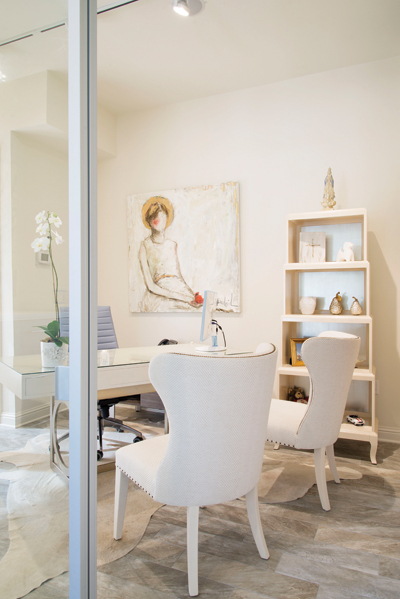 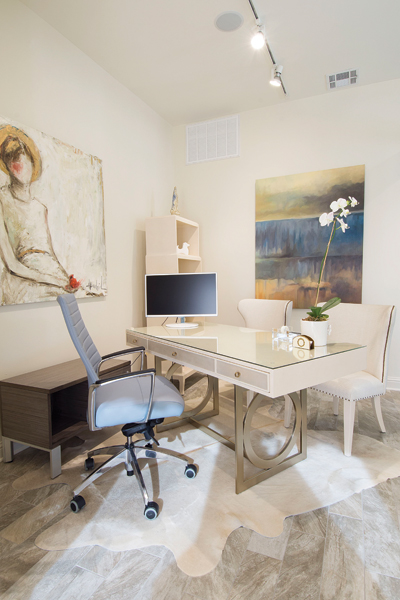 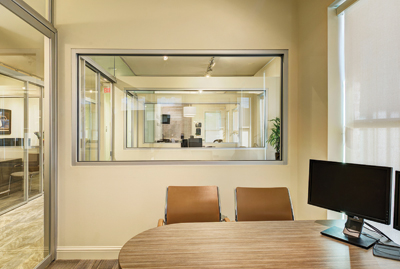 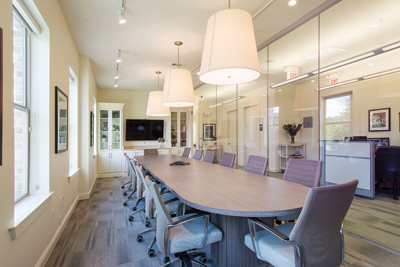 TOP LEFT: Nora Vaden Holmes wanted a different look and feel for her office, which features a painting of a woman holding a red bloom that she bought in Point Clear, Alabama, two years before starting the design process. TOP RIGHT: Holmes wanted the office to be light and airy, but with a state-of-the-art flair. BOTTOM LEFT: Glass windows promote the open, airy feeling of the space with furnishings by AOS. BOTTOM RIGHT: The 18-foot by 10-foot conference room boasts a high-tech audiovisual system with custom cabinets and serves as a community space made available to nonprofits and other groups.

“I wanted to have a community conference room for neighborhood groups, church groups, non-profits and other groups,” says Holmes. “It was very important to me.”

With a high-tech audiovisual system for presentations and video conferencing, custom cabinets and a glass wall the length of the vast 18-foot by 10-foot room, the conference room has become a hub for everything from AARP safe driving classes to Arbonne health and beauty sessions. The upper level features Shaw Group’s carpet tiles in “Dusk” gray, for which the team worked with Peter Plaia at Delta Flooring.

The homey kitchen is also located on the second floor. A massive double stacked Carrera Marble counter top from Stone Gallery perched on a 17-inch-high wood pedestal base is a comfortable place for employees to gather for lunch, to watch a little TV or, on this day, sneak a bite of King Cake.

Throughout the offices there is a mix of modern and contemporary-style desks with high grain, gray wood veneer and gray chairs, as well as commercial grade finishes and furnishings with a residential look. Holmes worked with AOS for much of the furniture and placement.

A favorite painting by Gretchen Howard hangs at the end of the hallway next to the entrance to Holmes’ office. 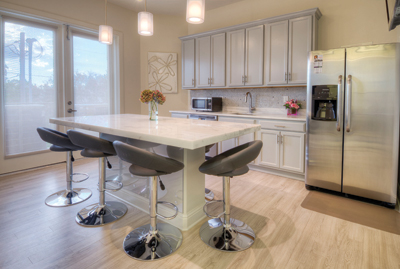 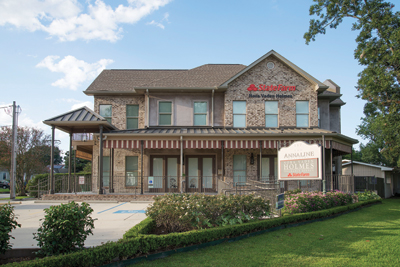 LEFT: A double stacked Carrera marble countertop sits atop a French pedestal in the kitchen.

“I told Terri I wanted to walk in every day and see that paining, so we built a cabinet feature to house it,” says Holmes.

Gray and white flooring, covered with porcelain floor tiles made in Italy by Storka Flooring, have the appearance of wood, with the durability and easy maintenance of tile. In the reception area a Caeserstone counter is backed by “Yesterday’s News” wallpaper in “Herald” style, made by Innovations USA. Texas sliding glass doors with brushed aluminum-cased finishes in the first floor office area create an open space with a private feel.

It’s easy to discern the pièce de résistance however. The white, back-painted glass reception wall bearing the company name and logo is a favorite of Dreyer, who says it turned out better than she ever imagined when they came up with the concept, a theme that seems to be repeated at this outwardly unassuming Metairie office.

Overall, Holmes says it was about her clients, explaining, “I wanted everything to be light and have a really nice place where people could come and talk about their finances.”