NEW ORLEANS – This month, Landis Construction gathered with hundreds of internal and external stakeholders to celebrate 65 years since its founding.

The company was established in 1956 by Fred Landis and then led by Jim Landis from 1978 until 2015. On Friday, Dec. 3, current CEO Anne Teague Landis joined longtime clients, architects, developers, elected officials, and community partners to commemorate the occasion at the New Orleans Jazz Market, which Landis constructed in 2014. 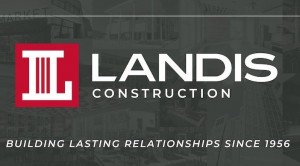 “When Katrina happened in August of 2005, we knew we could call upon Landis to get our campus back up and running, and they did within a matter of months, allowing us to re-open in January of 2006,” said Marion Bracy, VP of facilities planning and management at Xavier, in a press release. “Jim Landis has always displayed a positive example in our community. Now that it’s the younger generation’s turn, I’ve had a chance to see how they’ve continued to grow those relationships — something I know will take them far into the future.”

“I can’t emphasize enough how important it is for our city to have companies like Landis who are so engaged and involved in their community. I’ve seen firsthand how ready and willing they are to step up and lend a hand to their neighbors in need – not because they’re asked or expect some kind of publicity – but because they care,” said New Orleans City Councilmember Joe Giarrusso. “Watching the way they operate has been instructive, not just for other local businesses, but for all of us. In New Orleans, the only way that you survive is by consistently doing good work. For Landis, being around 65 years is a true testament to how they approach their business and treat their people.”