During my freshman year at Tulane, I was known around campus as the girl with the rose colored glasses and the gold sequin shoes. The Calvin Klein rosy shades were courtesy of “20/20” Eyewear, located a half block from where I grew up on Mercer Street in New York City’s Greenwich Village.

The gold shoes, with sequin fish and lotus designs and black velvet heels? They came from some foreign, far away land, courtesy of Kruz in the French Quarter.

Kruz Rakz is currently celebrating his 44th year in business. 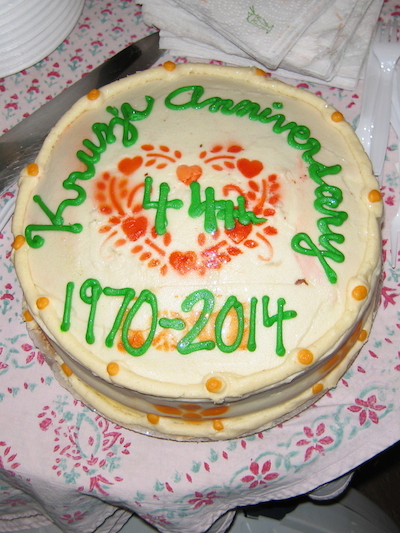 Billed as an ethnic boutique, Kruz was originally located at 432 Barracks St. for 43 years, and walking in was like transporting yourself to the open-air markets of Zanzibar or Marrakech. With the smoking incense and the Egyptian music and the tinkly-chimey sounds the little gold coins on the edges of belly dance scarfs would make when the warm New Orleans breezes blew through the always open arched doors – the whole scene was intoxicating.

It was there I spied my gold sequin shoes, and they were a perfect fit in every way.

Kruz now holds court caddy-corner at 1301 Decatur St. His new space lacks some of the exotic Middle Eastern allure of his old souk, but the merchandise still sparkles. From the glossy sheen of the musical instruments, to the striking details of the clothes and fabrics, to the variety of scented oils, bindis and henna, a trip to Kruz never disappoints.

There was some internet chatter a few weeks ago that Kruz had passed on, but Kruz told me, over a slice of celebratory red velvet cake, the false rumor was fueled by the fact he stopped sending email blasts out to his loyal following due to a computer crash. Along with updates of new merchandise, ethnic dance class schedules and the occasional hookah bar openings, each of Kruz’ emails came with an inspirational quote up top, and Kruz’ signature sign-off at the bottom: “Be Yourself. Everyone Else Is Taken!”

About my gold sequin shoes… I wore them to death and never had the heart to throw them away. They’re cracked and brittle and now occupy a dusty corner of a closet. But nothing could ever dull the shine of the memories I made when I wore them, the first year I fell in love with New Orleans.

Cantrell Joins 11 Mayors in Pledge for 'Green and Just' Recovery