And Her Grandmother's Evening Gowns

“I’m a Gemini, the sign of the twins, so my personal style is casual to dressy. I can go from jeans, boots and a blazer over a t-shirt to a pencil skirt and cashmere sweater, or black skinny pants and a sequined top all in a day,” Then she pauses to tell of her past when she studied piano for 15 years with Agnes Lewis Fox Downie, her grandmother who taught piano in Roanoke, Virginia, for over 50 years. “We played duets together in many of her piano recitals and it was a big deal to plan our performance attire together. She had a collection of beautiful long flowing evening gowns that she wore when she performed that were passed down to me after her death.”

Now the general manager of the Orpheum Theater, Kristin is center stage of the operation of the iconic multi-purpose venue that will celebrate the first anniversary of its opening next week (August 27) since a major renovation following Hurricane Katrina.

What may not be known to all of her business associates is her musical career that began with her grandmother’s piano lessons and continued with her study at the prestigious College of William & Mary where she received a bachelor’s degree in music with a major focus on classical vocal performance and also a major in English literature.

“Music is my first love,” she says. “I’ve been singing and playing piano my entire life and I greatly admire the musicians who perform on New Orleans stages and who tour and travel. I learned a lot about style from performing and singing in theater and on stage.” 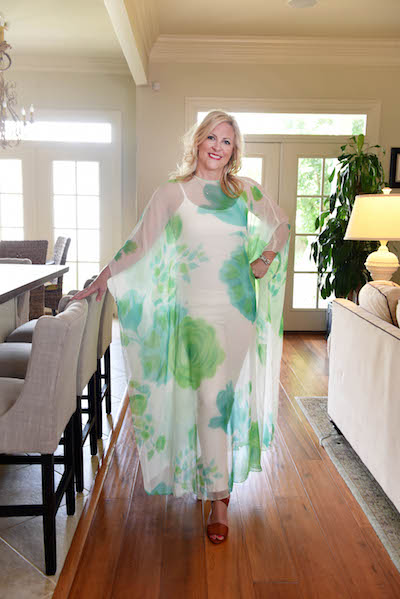 After moving to New Orleans in 2001, Kristin sang with the Symphony Chorus of New Orleans, an all-volunteer chorus that has provided superlative choral music in the area for more than 35 years. “I still remember how special it was to perform with the Symphony Chorus in the Orpheum Theater, and it is particularly satisfying to now be managing such a remarkable venue,” she says. “I think it’s amazing what Dr. Eric George and Roland and Mary von Kurnatowski, the owners who renovated the iconic building, have done to create a perfect, intimate, beaux art concert and performance space in the heart of the Central Business District just a half a block from the French Quarter. Now the Louisiana Philharmonic Orchestra has a great home and the list of uses has already gone from film screenings to Mardi Gras balls, charity and corporate events and vaudeville acts, and much more.”

Kristin resides in Metairie with Michael, her husband, and their sons Mason, age 8, and Henry, age 7.

“With two active boys and a husband in construction and real estate, I rarely have time to do much shopping,” she says. “We are a casually dressed family and I order most of the clothes for my sons online. I, on the other hand, like to look for sale finds for myself at TJMaxx, J.Crew or Banana Republic with a few signature pieces from Hemline or Saks Fifth Avenue. Now I will be supplementing my wardrobe with cool vintage items from my grandmother’s closet that include an Etienne Aigner leather coat and purse, and black suede ‘go go’ boots, in addition to her performance gowns.”

In keeping with Kristin’s imaginative style, she has created a modern version of her grandmother’s fashion by wearing the flowing evening gown shown with here with a white tank top and a pair of skinny white jeans instead of the slip her grandmother wore. 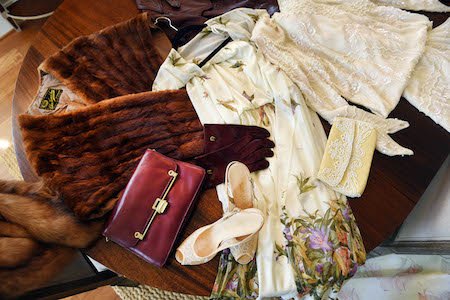