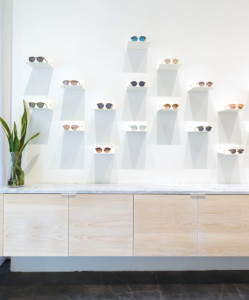 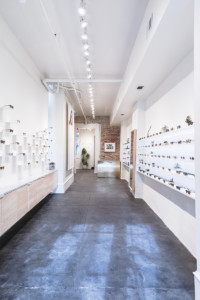 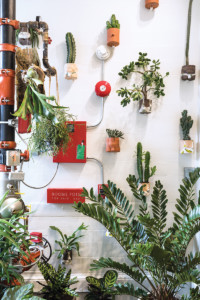 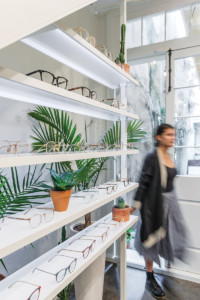 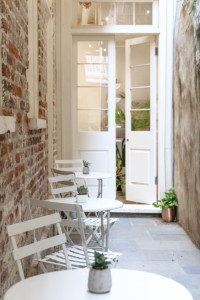 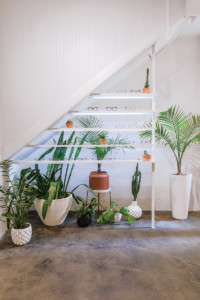 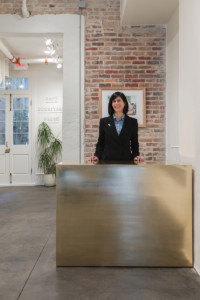 Upon entering Krewe du Optic — brainchild of 29-year-old photographer and eyewear designer Stirling Barrett — in the French Quarter, visitors are greeted with a friendly hello and asked, “Would you like something to drink? Frosé or a LaCroix?” The bright, narrow, minimalist showroom housed in a circa-1875 building, is awash in white with blonde wood accents, scored, newly stained concrete and a corner loaded with plants in pots on the floor and up the wall.

Until recently the space, which also has a café, courtyard and upstairs design studio, retained the same look it has had since opening in 2013. For its update, design decisions were based on several factors, including the company’s plan to release a new “frame family” every two weeks. The company also wanted to respond to storage needs, the day-to-day concerns of employees and the need for a good old-fashioned freshening up.

“We had three, large thick shelves on the walls, which didn’t allow us to display everything,” says Ashley O’Neill, Krewe du Optic social media manager. “We’ve updated a lot of the plants and pots. Nature, being active, is part of our branding.”

The company — whose eyewear is favored by models, musicians and Hollywood A-listers — worked with local design and fabrication firm Goodwood for the additional shelving, as well as other cabinets, counters and an updated cash wrap station. The cash wrap, formerly white but now covered in brass with cypress storage shelving in the back, is located in front of an exposed brick wall. To the left, a cabinet topped in Carrera marble is suspended from the wall.

Continuing past the cash wrap into the space between the showroom, café and courtyard is the optical room, which has additional white, powder-coated open shelving under a stairway on one side and white, metal shelving on the other wall. Exposed brick peeks out above the partially white wall.

The café has new signage and the counter was updated with whitewashed cypress and bronze edging. Visitors are encouraged to relax in the café or courtyard, use the Wi-Fi and work or hang out while enjoying the aforementioned frosé or LaCroix, frozen matcha or a coffee beverage (made with La Colombe).

In the courtyard, three white metal bistro tables with corresponding chairs sit along one side and plants and mirrors hang from the opposite wall.

In addition to opening a location in New York and expanding its prescription offerings and frame designs, Krewe du Optic is currently busy building its new headquarters in the Lower Garden District and another optical store on Magazine, slated to open later this year. Barrett’s vision is at the forefront of the design for his showrooms, collaborating with New York-based Nicole Cota Studio, whose work New Orleanians know from The Drifter Hotel in Mid-City.

The design studio — not open to the public — is located upstairs from the showroom. The studio appears more like a converted studio apartment, with a kitchen, a long work table covered in sketches and frame samples and a balcony. This is where eyewear is designed and also where the company’s local staff of 35 has meetings and brainstorming sessions, as well as parties and Carnival parade gatherings.
The updated design of Krewe du Optic centered on the showroom, café and courtyard.

“It’s bright, airy and opposite of most of the French Quarter,” says Chris Yarbrough, merchandising manager. “We definitely have more room to put out more product. The optical room really doubled. It’s perfectly in line with our optical program. We had a small window of prescriptions that we could fill and now we can do pretty much anything with prescriptions and lenses. We don’t have to say no to anyone.”

Address: 809 Royal St.
Office completed: 2013
Interior Designer: Stirling Barrett, company founder
Furnishings: Designed by Krewe and fabricated by GoodWood
Square footage: 900 square feet (first floor); 1,000 square feet (second floor studio)
Main goal: “When we opened the French Quarter store, we said, ‘New Orleans is a small city and we aren’t able to support a concept store, but what would a New Orleans Concept Store look like?’” says Barrett. “When you walk into the Krewe store, you’re surrounded by plants. The showroom floor is a clean, beautiful experience that lets the eyewear stand for itself. In the back we have a free courtyard and café. When someone comes into your home you want to serve them something — that’s important to us in this space. We make sure that Krewe hospitality is felt throughout the entire store and gives you an experience you can’t receive anywhere else.”
Biggest Challenge: “The building is from the late 1800s and in the French Quarter, so we had to work with what we had,” says Barrett. “It’s a wonderful location and structure that we love and cherish.”
Standout Feature: “The ability to see so much more product in a more enjoyable way is the best feature,” says Barrett. “Personally, I love the brass cash wrap, but that’s just because I’m obsessed with brass.”

City Provides Sneak Peak of Pedestrian-Friendly Ideas for the Quarter

Louisianians Protest for $600 Benefit, Against Evictions