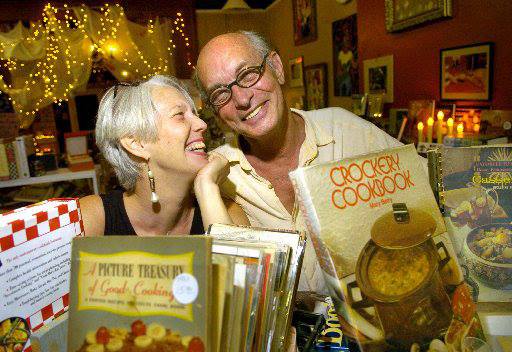 One of the first businesses featured in this blog was Kitchen Witch Cookbooks, owned by Philippe LaMancusa and Debbie Lindsey. The store opened in 1999 and offered new, used, rare and out-of-print cookbooks, vintage aprons, copper cookware, rolling pins, a proprietary collection of blended seasonings, expert advice and lots of laughter and warmth.

“You can always go to Amazon to get a cookbook, but you won’t get a hug,” Lindsey said in that first blog.

The couple truly loved their shop, customers and business. They often lovingly worked seven days a week and proudly shipped to customers from Portland, Oregon, to Portland, Maine.

Sadly, however, on Aug 15 the couple said goodbye to their brick and mortar store.

“I was sad and angry and guilty at first because I thought I could have done more to make the store work,” Lindsey says. “It was a good location with a fair market lease and we didn’t have a problem with the landlord, we just couldn’t compete. The handwriting was on the wall. Barnes and Noble has 80 percent of the book market and Amazon has 50 percent,” she says sardonically. “How’re ya gonna fight that?”

LaMancusa and Lindsey recently had a rummage sale and sold more than 10,000 cookbooks, several bookcases, lamps and chairs and gave the Louisiana Philharmonic Orchestra about 1,000 cookbooks, 1,000 CDs and 500 cassettes.

Lindsey says that just yesterday a customer from Australia called to ask if the store was going to be open.

“She was going to Uber on over to see us while they were in town,” she says. “I had to tell her we were closed forever. Those tourists used to plan their trips around coming to see us. We were better known in Australia than we were with people living Uptown.”

To survive in today’s marketplace, many businesses need to change and adapt, and that’s exactly what this couple will do. They are turning their focus to LaMancusa’s seasonings — the spice blends represented 20 percent of the store’s revenue.

LaMancusa is a chef with more than 50 years of culinary experience. Years ago, he worked with Paul Prudhome and watched his seasonings take off.

“I study spices,” he says. “I have perhaps 10 pounds of notes on recipes. I still have seasoning recipes from the time I worked at Houlihans in the Quarter. They are like love notes from the past.”

Throughout his career, LaMancusa worked in a wide variety of ethnic restaurants and put those influences into his seasoning blends.

One of the Kitchen Witches’ most successful seasonings is a spice blend called “Creole Crack.” The ingredients include Kosher salt, paprika, garlic, herbs and spices.

LaMancusa also makes a pepper blend from 25 peppers which he handpicks, lovingly roasts and seeds in his kitchen.

The business (still called the Kitchen Witch) will now operate as a pop-up and sell its spice blends by setting up at different locations around the city, getting the word out through social media. It will continue selling online and offer a pickup day for locals to grab their online orders from the couple’s porch.

“We are going to load up our ‘97 Lincoln with the remaining contents of our madness and put it all into the trunk of the car,” Lindsey says. “And the car will have twinkle lights and it will vomit forth color.”

The couple lives near Liuzza’s By The Track, and plans to begin this new adventure by parking the Lincoln close to the restaurant in order to catch the busy lunch crowd.

“If seasoning became illegal,” says LaMancusa. “They’d have to arrest me, and I’d plead insanity — crazy for seasonings.”

New Orleans’ “Home Away from Home” Prepares to Reopen