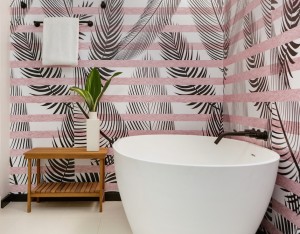 The hotel is located at 501 Tchoupitoulas Street, the former address of the  Staybridge Suites New Orleans.

“Our goal is to honor the city’s heritage while occupying an exciting new niche in the local hospitality scene,” said Jesseca Malecki, the hotel’s general manager, in a press release. “Every detail, from the thoughtful, purposeful music selection in the lobby to the early evening social hour and always-on programming, is an expression of the modern Southern hospitality nature of the city and its locals.”

The Hotel Fontenot’s “living room” lobby features custom art, including a butterfly installation by Paul Villinski located behind the front desk, hand-painted violins by Austrian artist Georg Bauss, and an installation of trumpet and trombone mutes on one wall. The lobby features white paneled walls and wide plank white oak wood floors with black accents. The 202 guest rooms feature a “clean and modern aesthetic accentuated by soft colors, bright and airy spaces and irreverent touches, offering a serene refuge in the heart of the city,” according to Kimpton press materials. 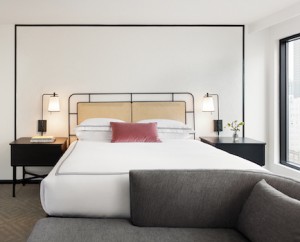 Hotel Fontenot is donating $5 from every booking to The Roots of Music, a nonprofit organization that empowers young New Orleanians through music education, academic support and mentorship.