Kevin Harrington lives a dog’s life. “You don’t need to dress fancy when you work at Zeus’ Place,” he says with a smile as he rolls up the sleeves of his red plaid shirt. “As a matter of fact, neither the dogs nor cats that I come in contact with everyday care what I wear. All they care about is that I give them lots of love and never miss an opportunity to pet each one of them.” Kevin’s signature style is definitely plaid shirts. “I have a wardrobe of about 35 plaid shirts that are definitely my signature work attire,” the office manager adds.

Located on Freret Street between Napoleon and Jefferson avenues, there is never a dull day for Kevin.

“We say that Zeus’ Place is your pet’s home away from home, with boarding, grooming and doggie daycare offered,” he says. “It is an interesting business, and it is fine with me that we are always busy because I thrive on hard work.” Kevin seems to always manage to have a smile on his face, and he likes the fact that he is known “as the fellow wearing the plaid shirt.”

“I have been a fan of plaid shirts for most of my life, but they only became my daily attire when I started working at Zeus' Place,” he says. “Honestly, I love to wear plaid shirts to work here because they cover a myriad of sins. I work with animals and with food, both of which can sometimes be a bit messy. I know it is not the most glamorous response, but the truth is that my work can be rather sweaty – and so if I sweat a lot, it isn’t as obvious in plaid shirt as it was wearing a solid color.” Then Kevin smiles and unabashedly adds, “And I think plaid shirts are a good look for me.”

He isn’t sure when he got his first plaid shirt. “I do know that when I visited my family over the recent holidays my sister gave me a box of photos and things from my childhood, and there I was smiling in my sixth grade class photo wearing a green plaid shirt.”

His favorite plaid shirt is a Levis brand in red and white. “It is made of nice soft flannel, and it is extremely comfortable,” he says. “It has been pointed out to me that I wear a lot of blue, so I like my red and white shirt because it is different.”

For short sleeved shirts Kevin prefers 100 percent cotton, while his long sleeve shirts are mostly flannel. “It is all about comfort,” he adds.

When asked where he gets most of his shirts, he replies, “Academy Sports + Outdoors is a good source for me because I know I can always find a good selection there.” On occasion, he shops at Goodwill on Tulane Avenue. “They always have a good supply of plaid shirts, which is great for me because used plaid shirts make a lot of sense to me since they are already nice and soft from many washings. I also check out the Junior League's Bloomin' Deals store on Freret Street, since it is convenient to work.” 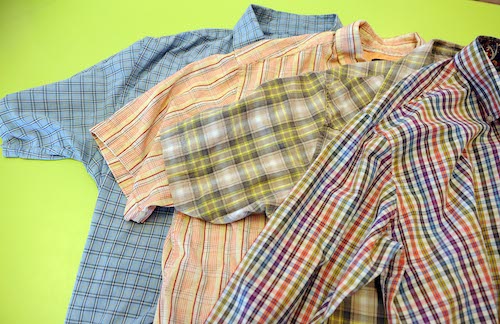 A native of Buffalo, NY, Kevin lived there until he moved to New Orleans when he was 21. “The original plan was to stay for six months or maybe a year, but I fell in love with the city and have been here for nearly 24 years.

“I have been at Zeus' Place for five and a half years, and I love everything about this job, especially the animal rescue work that I find most rewarding. In 2014, we rescued over 300 pets from local animal shelters and placed them with permanent families. We also have a great customer base of boarding and grooming clients, so I have a lot of four-legged friends that I get to see on a regular basis.”

Kevin’s own pets are two rescue cats. “They are eight-year old brothers named Lovey and Dovey. Lovey is a gray tabby and Dovey is a tuxedo.  I have owned dogs in the past, but with my busy work schedule cats are a better fit for me. Lovey and Dovey don’t seem to care what I wear; they are just happy when I come home each day.”

Kevin says it’s funny how he has become such a plaid shirt collector. “To be honest, I didn't notice that I was such a fiend for a particular shirt until we were shooting the video to use in a Zeus’ ad for online Uptown Messenger, a daily online publication,” he says. “A few weeks before the video was being shot, Michelle Ingram, the owner of Zeus' Place and I were out shopping and I picked up a few new plaid shirts. When I showed them to her, her response was, ‘Don't you already own those shirts?’  I didn't, but we realized that we had a good ‘hook’ for my part of the video.”