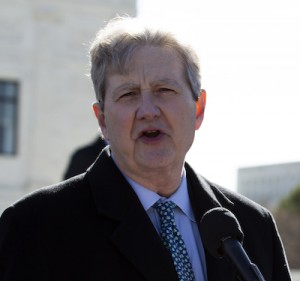 BATON ROUGE – U.S. Sen. John Kennedy is trying to stop an effort to allow the U.S. Small Business Administration (SBA) from making direct government loans through its 7(a) lending program.

The 7(a) program provides up to $5 million for eligible borrowers to spend on real estate, short- and long-term working capital, refinancing of current business debt and “furniture, fixtures and supplies.”

Private banks typically issue the loans, but a provision in the Build Back Better congressional spending bill would allow the government agency to use taxpayer funds to make loans directly to selected businesses.

The provision, known as Section 100502, or the Funding for Credit Enhancement and Small Dollar Loan Funding, would allocate nearly $4.5 billion over 10 years for the lending program.

Republican lawmakers, including Kennedy, and multiple banking associations have warned against crowding out private lending entities in favor of government workers. Kennedy and others sent a letter to Senate leadership in October, citing past abuses regarding singular SBA direct loan initiatives.

“The government shouldn’t encroach on a space where private lenders are already doing a good job getting funds to the small businesses that need them,” Kennedy said.

“Forcing community banks and local credit unions to compete with a massive government agency is inefficient and wrong,” Scott said. “Funneling tax dollars through the federal government in order to loan it back to small business owners with interest makes no sense.”

“Small businesses are the foundation of our economy and ultimately the key to our nation making a full economic recovery,” Velázquez said.

“We have received complaints of more than 5,000 instances of suspected fraud from financial institutions receiving economic injury loan deposits,” the report read.

By William Patrick for the Center Square