Mary and Roland von Kurnatowski, the duo behind the newly renovated Orpheum Theater, Tipitina’s, and a planned lakefront festival park, share their thoughts on why the arts are more than just big business in New Orleans.

If you ask them, Mary and Roland von Kurnatowski didn’t set out to become keepers of New Orleans’ cultural flame, but over the years, they have quietly taken on that role. Nearly two decades ago, they bought the iconic uptown music club Tipitina’s and have since helped grow the Tipitina’s Foundation into a thriving organization that aids young musicians across the city in developing their craft.

In 2014, along with a business partner, local orthopedic surgeon, Dr. Eric George, the von Kurnatowskis bought the Orpheum Theater, one of the city’s most beloved performance spaces. After a painstaking restoration — in which the couple played a highly hands-on role — the theater reopened in August 2015 to great fanfare and has reclaimed its position as a premier downtown arts and events space.

Next up, the duo is looking to the lakefront and the former site of the Bally’s riverboat casino, where they are developing plans for a festival park, along with George, under a company called Studio Network-Lakefront LLC. Tipitina’s Festival Park, as it is is currently called, is proposed to span 4.5 acres and include a water park, 5,000-seat outdoor amphitheater, shops and an outdoor market.

Mary and Roland share their thoughts on these projects and what the business of the arts means to New Orleans.

Biz: The reopening of the Orpheum made a big splash in August. How have the first few months of operation been?

Roland von Kurnatowski: The opening was interesting — [General Manager, Kristin Shannon] put it together, and she did a great job. I felt like it was the perfect New Orleans feel. Then it was, we’ve got to start the business of making this thing work. Kristin is all about that — she’s got a real sense of how to serve customers at a very high level, and we think that the Orpheum is the perfect place to set a very high bar for people coming in and being satisfied that they did their wedding, event, etc. with the Orpheum.

Biz: How do you differentiate the Orpheum from other venues in the city?

RvK: I think that we get differentiated in a few ways. One is our capacity. We’re in the middle — we’re not 800, we’re not 3,000. We’re 1,500-1,700, so that differentiates us to a large degree. But the history and the community awareness for the Orpheum is also different. We didn’t create it, we’re just trying to preserve it. Even its location — it’s not right on Canal; it’s right across from the Roosevelt — that’s a little different.

The third differentiation is the floor because we’re not locked into solely theater activity. That gives us the flexibility to do other things — from weddings to rock concerts to Mardi Gras balls. That floor goes up in nine-and-a-half minutes. It has massive 13-inch steel beams with 5 inches of concrete poured on it, and it weighs 235,000 pounds, so when you’re on that floor, it’s solid as a rock.

We also, thanks to Kristin, changed our original plan from putting in a serving kitchen to a high-end full kitchen, which gives us flexibility that I didn’t realize we would need. And we put in an installation that enables us to show first-run movies, which opens up more possibilities, like premieres. 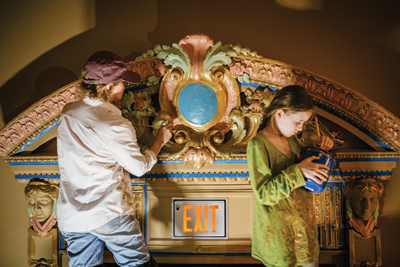 “I also love the mezzanine bar area,” says Mary, “because [our daughter] Mary Grace and I spent probably over a month working in there every day over the summer, painting it together.

Biz: Is there a part of the Orpheum that you are the proudest of after such an extensive renovation?

Mary von Kurnatowski: I think the last place I painted in the building before we had the preview party was part of the proscenium arch on the stage — that’s probably my favorite part. But it’s like picking out your favorite child. That whole building is just really special. They really used to know how to build things. I also love the mezzanine bar area because [our daughter] Mary Grace and I spent probably over a month working in there every day over the summer, painting it together. And I love that we did so much there.

RvK: For me, it’s the floor, because we did that ourselves. With our construction and design team, we had to do it from scratch. If we had put something there that wasn’t solid as a rock, if it took too long or cost too much to do it, it would have been a failure. I’m pretty proud of our group for figuring out that floor.

Biz: You’ve owned Tipitina’s for nearly 20 years. What does that institution mean to you, and to the community?

Our role with Tipitina’s is that we didn’t change it. We held onto it. We’ve had a lot of offers to turn it into karaoke and stuff, and we said no, it needs to be Tipitina’s. You see these things about ‘the 10 best clubs in the country’ all the time, and we seem to be in there a lot. In terms of affection, I think it’s absolutely true that artists have a place in their heart for Tipitina’s. I think our job is to preserve it.

The goal of the Tipitina’s Foundation with musicians, from my point of view, is to help them, not change them. I heard somebody once say you’ve got to help these musicians become better businesspeople, and I was like — they’re musicians. I’m not sure we need to do that. We need to help them have their business taken care of better. But they just need to be the musicians.

The internship program we got very lucky with. For years now, Donald Harrison [Jr.] has been an absolute rock for that program. We have somewhere between 18 and 30 interns a year, and very few drop out. What we do is we expose these young people to professionals like Donald Harrison, and what we really want out of it is that they absorb how to become a serious musician from a practical standpoint. What do you really need to get work and be taken seriously as a musician?

Biz: How does the lakefront project fit into the picture?

RvK: We have a boat out there, and we’ve gone out there for years. The marina has been underutilized and undersold ever since Katrina. There’s a private airport and a marina — what other city do you know in the country that has waterfront opportunity and is just dead in the water?

MvK: I think so much of the waterfront focus here sometimes winds up being on the river and not on the lake, but I think the lake has been a sentimental favorite of New Orleanians for decades, with everything that used to be out there.

RvK: So you say to yourself, ‘What could happen here?’ We got approached about doing a little festival out there. We made a couple of commitments on that but didn’t think too much about it because it was so far out, and the Orpheum took center stage. But then the powers that be decided to put out a call for proposals for somebody to lease this property and develop it. I think we just took it a week at a time, and if the Orpheum had stalled out somehow or gotten into a crunch, we probably would have backed away from the festival and the proposal. But we decided to go ahead with the festival, and that taught us some things about that site that made us feel more encouraged about doing the proposal. So we did the proposal. And they liked it. 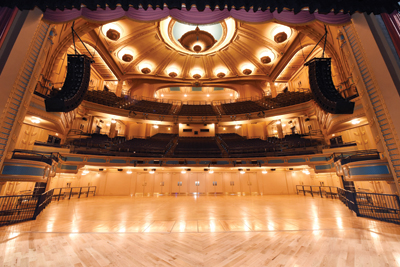 Along with orthopedic surgeon Dr. Eric George, the von Kurnatowskis purchased and restored the Orpheum Theater, which reopened last August.

Biz: How are the plans shaping up?

RvK: We’re into the process now. Eskew+Dumez+Ripple is the architecture firm — I can’t say enough nice things about them. With the structure that’s out there, we can put a really first-class restaurant on the upper level. It’s 25 feet up and will have a panoramic view of the lake and the city, a huge outside deck for eating, and underneath will be an open-air pavilion to do all different kinds of community events, fishing rodeos, corporate events, crawfish boils, a green market. We’ll have an amphitheater for music shows, a fuel dock, and a recording studio to bring artists in from all over the country and the world. And we’re in discussions with the World War II Museum to have a PT boat out there as an attraction. I think that the development is going to be stretched over maybe three years, but the things I mentioned would be the first part of that.

Biz: Why do you think the arts are so important to the city’s cultural economy?

MvK: I look at it from the childhood perspective. Keeping the arts in our city and our schools is critical because study after study has shown that being able to study art or music in school has a tremendous impact on the rest of a child’s academic performance and a willingness to stay in school longer. I think the arts are something that affect our lives from birth until death. New Orleans certainly has its share, and yes, that’s a huge part of our economy and we rely on it for that, but I think it goes a lot further.

RvK: It’s just a very simple fact that the soul of New Orleans is very important to who we are. I’m sure it has to do with a mixture of cultures, attitudes and circumstances, but it exists. And we definitely shouldn’t lose it. It’s unique. Music, of course, is critical to that. So if our little piece is to keep Tipitina’s in play and maybe do some other things, that’s great. It doesn’t have to be a big enterprise, just take them as they come, do what we’ve learned to do and hope for the best.