Just a Spritz Will Do

This local 83-year-old entrepreneur’s new hygiene product was just picked up by Walmart.

It’s a well-known fact that great ideas often come to us in the shower. But they can sometimes pop up elsewhere in the bathroom, too.
During Angelo Chetta’s recent travels through Europe, he was struck by the fact that nearly every lavatory contained a bidet. “I just thought that was so much more civilized than what we have in this country,” says Chetta. “We pride ourselves with sanitation and cleanliness and seem to be content with dry toilet paper.”

Over the last year and a half, Chetta has set out to change that practice with Milavo, a “pocket bidet” that transforms ordinary toilet paper into a wet wipe with just a spritz from the compact bottle. (The product’s name is derived from the phrase “mi lavo,” which means “I wash” in both Spanish and Italian.) Chetta is also quick to point out that Milavo is not only meant for toilet-related use. In his vision, travelers or busy gym-goers without time for a shower could use Milavo for a quick all-over birdbath, as could a parent who’s picked a perilous moment to run out of baby wipes.

According to Chetta, Milavo’s small bottle — it’s slightly larger than a cigarette lighter — can be carried discreetly in a pocket or purse, unlike bulky containers of wet wipes. It also offers a more environmentally and plumbing-friendly option than traditional wipes (even those marketed as flushable can defeat bathroom pipes — just ask anyone who lives in an older New Orleans home).

Currently being launched in 89 Kinney Drug stores in New York and Vermont, Milavo can also be purchased on MilavoSpray.com and on Amazon.com. As of early December, the product is expected to be available on Walmart.com.

At the age of 83, many people would be content to relax and play golf. Chetta’s not one of them. “I’m retired, but the mind never stops,” says Chetta. “I’ve always had an entrepreneurial bent.”

He has tapped this creativity over a long and colorful career that included 20 years as the operations director for the Louisiana Superdome, working as an urban planner for St. Bernard Parish, and touring the South as part of a children’s theater company. He even had a previous experience creating and copyrighting a character called the Crawgator in the early 1980s. Half alligator, half crawfish, the character graced products ranging from beer to hot sauce to t-shirts, before its popularity waned in the face of competition from merchandise for the 1984 World’s Fair.

“As you can see,” says Chetta, “my interests are varied.” 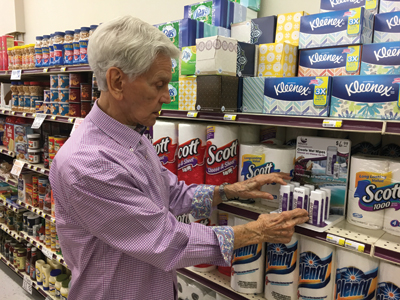 The process of moving Milavo from the seed of an idea to drugstore shelves has been complicated, taking well over a year. Once Chetta decided to pursue his invention, he knew he had to start with the distinctive packaging, which he believes is critical to its success. He first spotted the bottle he had in mind on a store shelf — containing another product. The next step was tracking down the source of the bottle (it turned out to be China).

Now that he had found Milavo’s bottle, Chetta needed to work on what it would contain. He contacted several manufacturing cosmetic companies about creating the right formula for the product and eventually found one in Florida that fit the bill. They worked on several versions before submitting the winning mixture, which includes a mix of lavender, aloe vera, tea tree and lemon peel, among other ingredients.

Having tracked down his preferred bottle in China, Chetta was faced with not only a three-month shipping time, but also a minimum order requirement of 25,000 bottles. More time passed as he applied for the trademark and UPC code, then worked on a label design that met all the legal requirements for labeling. “Of course,” he adds, “you really don’t get the trademark until you sell your first bottle — so while all that was going on, the trademark was pending until I actually had product to sell.”

With those hurdles finally crossed, Chetta had his long-awaited product sample in hand. However, getting the product produced in bulk meant another minimum order: this time 4,000 bottles — with a turnaround time of five to six weeks. The downside of producing only the minimum number was that it increased the unit cost, or as Chetta says, “I paid through the nose for both bottles and the initial order, which kind of puts you at a disadvantage because your wholesale price is dependent on your production cost.”

With that first run behind him, Chetta is hopeful that he will be able to place future orders in greater quantities, thereby bringing down the unit cost to a more reasonable level.

Spreading (and spraying) the word

Once he had his product ready to go, Chetta sought to bring Milavo to the attention of potential customers. He started here in New Orleans, advertising in local publications such as New Orleans Magazine and Gambit, but found it difficult to drive traffic to the product website (which was the only outlet for purchase at that time). “I didn’t realize what I was getting into with that,” he says.

Then he happened upon an article in the June 2016 issue of Biz New Orleans, detailing a local man’s journey to producing his own invention (the Reachable Magnetic Ceiling Filter Vent Cover). The story mentioned the involvement of a company named Product Launchers, a business consulting firm that helps fledgling entrepreneurs get their products onto the shelves of regional and national retailers.

Chetta reached out to Product Launchers for help, and they have since placed Milavo in 89 Kinney Drug stores in the New York area and are continuing to pursue additional outlets. “It’s an ongoing challenge,” says Chetta. “At this stage I’m more or less dependent on Product Launchers to get me to the next level.” They do charge an administrative fee, but as Chetta says, “If I had to hire a salesperson to go out in the field and beat the bushes, I’d have to pay that individual. They take that burden off of me.”

In the interim, he is self-financing the whole undertaking, which further fuels his desire to see Milavo succeed.

A future full of Milavo 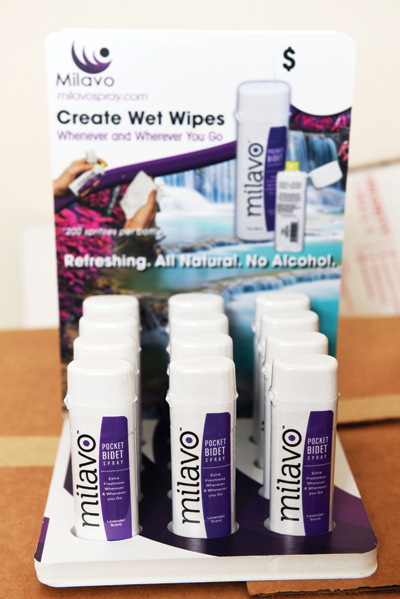 In Chetta’s ideal world, Milavo would be found “anywhere people are on the go.” This would include the checkout counters of airport concessions, spas, health clubs, “in every hotel bathroom, every gift shop, every goodie basket. To me, that’s where the volume is.”
He has also heard surprising “anecdotal information” from customers who are using Milavo on their pets. “Instead of giving their pet a bath, they spritz Milavo on it as a temporary fix for pet odors.”

One privately owned local drugstore, NOLA Discount Pharmacy, is carrying Milavo in its two locations, and Chetta plans to approach additional local players. “I say local because you don’t have to go through the chain of command,” he explains. “If you’re trying to get something into CVS or Rite Aid, you have to jump through quite a few hoops and go through the national offices, not the local. Here again, that’s where I hope Product Launchers can get me an entrée.”

At this point, Chetta is awaiting feedback on the sales of the 30 dozen units he shipped to Kinney Drugs. He is also hoping to gain traction in local markets and more broadly through Product Launchers. “It’s exciting, and it’s also expensive and nerve wracking,” says Chetta. “That’s all part of life, I guess. You’re in there playing the game and not on the sidelines watching. That’s pretty much my philosophy.”

When asked if he has more invention ideas in the hopper, Chetta demurs. “Not really. You never know. It’s like giving birth — one baby at a time. We’ll see what happens with this.”

A history of innovation

446: Number of those patents originating in Louisiana

Did you know these things were invented in Louisiana?

CrankCase: a hand-cranked smartphone charger. The inventors are a duo who met at Louisiana State University. After relying heavily on their cellphones in the wake of Hurricane Katrina, they were seeking a reliable way to keep a smartphone charged.

The casino game ‘craps’: This game was brought to New Orleans from England in the early 19th century and adapted for American play by Bernard Xavier Philippe de Marigny de Mandeville, a local politician and gambler.

The Binocular Microscope: This groundbreaking piece of equipment was invented by John Riddell during his tenure as chairman of Tulane’s Department of Chemistry (from 1837-1862).