John Schaff is a man with more than 50 wrist watches who always knows what time it is. “I’ve loved watches as long as I can remember,” he says. “It was my father’s 1964 Bulova watch that started it all. The year was 1988 and I remember pining over it as it sat in his top dresser drawer. He knew how much I loved it and gave it to me for my 18th birthday.”

Today his father’s cherish watch is front and center in his watch box display on top of his coffee table. “The first nice watch I ever bought for myself was a 1992 Gucci,” he says. “I was a student at the University of New Orleans at the time and working part time at Pour Moi, an upscale gift shop in the Esplanade Mall. I met the manager of Bailey Banks & Biddle (BB&B), a fashionable jewelry store, and we started discussing watches and I soon began telling him how much I loved them. The next thing I knew, I was spending $500 for my Gucci watch and I was being offered a job by my new watch-lover friend. I loved being in the jewelry business and worked for BB&B until I left a few years later to work for Adler’s in the Lakeside Mall.

In 1998, John left the jewelry business to pursue a career in real estate. “I quickly realized I had found my calling and never looked back,” he says. John has been one of the most successful Latter & Blum (L&B) producers from the day he joined the team a year later to help form the Garden District office, where he has continues to be in the “Top 20” producers. “I have occasionally been a ’Top 5’ producer and even No. 1 once. I was actually ranked number 63 in top real estate income earners in the nation by the Wall Street Journal one year,” he proudly adds.

A fifth-generation native of New Orleans, he owns a home on St. Charles Avenue where he loves living on the Carnival parade route. “My favorite parades are Muses, Bacchus and Orpheus,” he says. “You know I am a true native when I say Mardi Gars has always been one of my favorite holidays and this home has made my love even greater.” 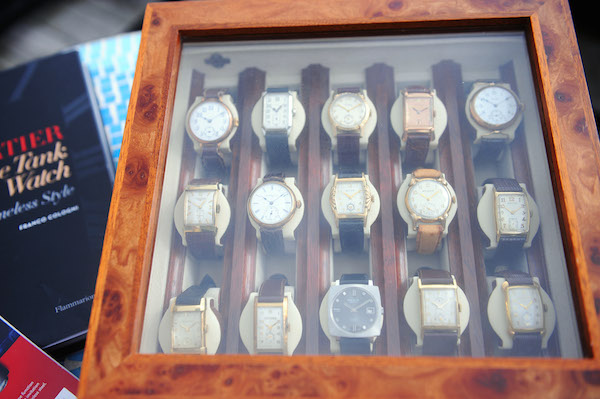 John’s coveted role as a top producer in the area for condo conversion sales and development has enabled him to amass an outstanding watch collection. “It has been a joy collecting watches, although there are only about six that I wear on a regular basis,” he says. “Each watch has been added to my collection with a story and many have been purchased on my European travels.”

His most unique watch is one he purchased at a watch mart some 15 years ago. “It’s unique because it used to be a pocket watch and it was converted to a wrist watch,” he says. “The back is still hinged so you can open it to look at the movement, which I think is very cool. Although I never wear it, it’s an important part of my collection.”

How does John display his watches? “I have a case on the coffee table that holds 15 of my favorite antique watches,” he answers. “I like to have them right where I can enjoy looking at each one.”

He say his favorite watch will always be his father’s 1964 Bulova. “I also cherish the two Rolexes that I inherited from him. The first is the steel and gold one that I actually sold to him in 1994. He gave it to me in 1996 when I sold him his all-

gold Rolex two years later. He passed away in 2005 and my family gave me his gold Rolex.”

His father’s gold 18-karat gold Rolex is the most valuable one in John’s collection. “The retail value today would be $23,000 – to me it is priceless,” he says.