Legend, a singer, songwriter and producer, first catapulted to stardom with his platinum-selling album "Get Lifted" in 2004.  Following critically acclaimed hits including "Ordinary People," "Green Light," "Glory" and "All of Me," Legend garnered global recognition with 10 Grammy Awards, an Academy Award and a Golden Globe.

On Friday, Dec. 2, Legend released his highly anticipated fifth studio album, "Darkness and Light," including his new hit single, "Love Me Now," which has drawn over 35 million streams on Spotify and 37 million combined video views. Other standout tracks on the album include Legend's exciting collaborations with Chance the Rapper on "Penthouse Floor," Alabama Shakes' Brittany Howard on title track "Darkness and Light," and Miguel on "Overload."  He will delight fans with a compilation of his newest and greatest hits during halftime of the NBA All-Star Game.

With HARMAN serving as the Official Sound of the NBA, its audio brand, JBL, will be the presenter of this year's NBA All-Star Entertainment Series. JBL will power exciting musical performances during State Farm All-Star Saturday Night in addition to pregame introductions and the halftime show at Sunday's All-Star Game.

To bring the excitement of NBA All-Star 2017 to fans throughout New Orleans and its surrounding areas, the NBA is hosting a lineup of fan-favorite events during its star-studded midseason showcase. Tickets are available now on www.NBATickets.com and start at just $10.

Beginning Friday, Feb. 17, at 6:00 p.m. CT, some of the hottest celebrities from film, television, music and sports will take the court for the NBA All-Star Celebrity Game at Mercedes-Benz Superdome. Later that evening, the league's rising first and second-year players with bright futures will face off during the BBVA Compass Rising Stars Challenge at Smoothie King Center at 8:00 p.m. CT.

On Saturday, Feb. 18, fans can see the entire NBA All-Star East and West squads gear up for the All-Star Game during the NBA All-Star Practice at Mercedes-Benz Superdome beginning at 11:00 a.m. CT. During practice fans will enjoy a variety of exciting events, including the preliminary round of the NBA D-League Slam Dunk presented by Verizon, featuring the best dunkers in the NBA's official minor league.  Following NBA All-Star Practice, fans can watch future stars compete in the NBA D-League All-Star Game presented by Kumho Tire at 1:00 p.m. CT. The game will be preceded by the preliminary round of the NBA D-League Three-Point Contest, and halftime will feature the final rounds of the Three-Point Contest and Slam Dunk presented by Verizon.

TNT, ESPN and NBA TV will combine to present continuous coverage of NBA All-Star 2017, starting with the NBA All-Star Celebrity Game on ESPN and the BBVA Compass Rising Stars Challenge on TNT on Friday, Feb. 17.  In addition to its Friday night coverage, TNT will be the exclusive home of NBA All-Star Weekend's signature events, including State Farm All-Star Saturday Night on Feb. 18 and the 66th NBA All-Star Game on Sunday, Feb. 19. 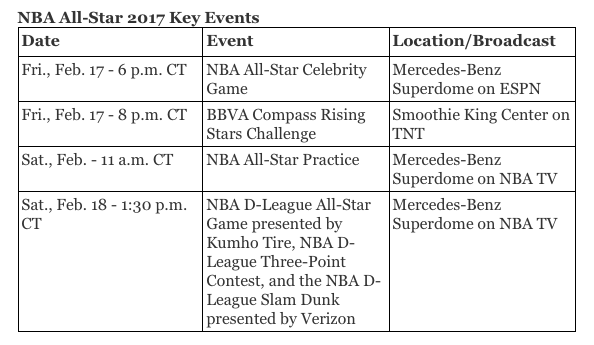