And her red shoes

“My love for red shoes goes back as far as I can remember,” Johanna Rotondo-McCord says. “I think that I got my first pair of red shoes when I was six years old: they were covered in glitter. I wore them until I couldn’t even jam my feet into them; I was so crushed when I had to give them up.”

She continues her tale of loving red shoes by adding, “I’ve always had a crippling penchant for red footwear. Most of my clothes are black and earth toned – it’s much easier that way. But there is a freedom with shoes. They can both perfectly complement and complete an outfit, and make a regular outfit really stand out.”

It is easy to understand why Johanna follows her own style sense when it comes to loving red shoes. As publicist and award coordinator for Pelican Publishing Company and a papercut artist, it is right to peg her as a creative person. Named the Creative Writing Department’s distinguished student in her senior class at New Orleans Center for Creative Arts (NOCCA), she simultanesly was a student at Mandeville High School and NOCCA. “I would have worn red shoes to my graduation from high school, if there hadn’t been a rule that I had to wear white ones,” she says.

Johanna certainly took her red shoes along when she went to Warren Wilson College in Swannanoa, a unique school near Ashville, North Carolina. “It’s a tiny work and service college with a working farm where part of your graduation requirement is to perform community service and work for a portion of your tuition,” she says. She graduated in 2010 with a major in English and almost an art minor.

Born in New Haven, Connecticut, where her parents were graduate students at Yale University at the time, she lived in Hong Kong and Germany as a young child before her family settled in Mandeville in the early 1990s. “Today my mother, Lisa, is the Asian Art Curator and Deputy Director for Curatorial Affairs at the New Orleans Museum of Art, and my father, Jonathan, is a medievalist and an associate professor of history at Xavier University,” she says. 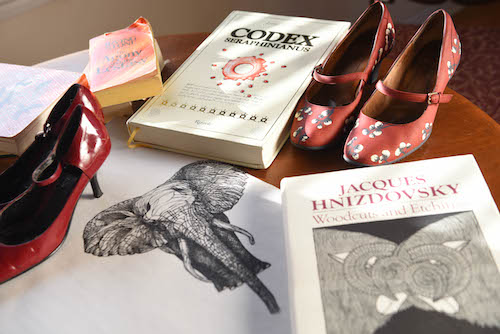 Johanna moved back to New Orleans, with her Vermont-native boyfriend – Rudolf “Rudy” Hirss – in the summer of 2012. “We both felt there were lots of book-related, teaching and culinary options for us here,” she says. Now they are living the New Orleans dream in half of a double-shotgun in Midcity, while she indulges her love of books working at Pelican and Rudy makes ice cream and gelato at La Divina Gelateria.

The list is long of what Johanna loves about New Orleans. “I love the people, the music, the literature, the food, the culture, and most of all, I love how much everyone cares about this gorgeous, crazy place. The city is amazing. For many years, people have been saying that we shouldn’t stay here, but we do. We think it’s beautiful. Where else are you going to eat alligator on a stick?”

“We also love our tightly knit community where we all watch out for each other. Everybody brings each other food and stories. My landlord, who lives on the other side of the house, runs NOLA GreenRoots, so we frequently get surprise baskets of organic produce right outside out bedroom door that leads to the back porch.”

In the bedroom, Johanna describes her closet as benevolently controlled chaos. “It’s probably good that I don’t shop frequently, and when I do it’s off to thrift shops and vintage stores,” Then she smiles and adds, “My wardrobe is a strange mix of impulse buys, gifts and whimsy.”

And what could be more whimsical that having a special love for red shoes, from her first happy memory of the red ones covered in glitter, to the red shoes in her closet today, Johanna proudly lets her individuality shine.