And Her Bodacious Bra Pocketbooks

Jeffrey McIlwain is a talented hair stylist, costume designer and the 2015 Queen of the Krewe of Cork. Her New Orleans style varies from elegant clothes from Saks Fifth Avenue at One Canal Place to costumes for everything imaginable, including her handsome costume for her reign as Queen.

“I began sewing when I was five years old,” she says. “By the time I was nine, I had completed a sewing course at Singer Sewing in Beaumont, Texas, and I had begun making costumes for myself and my friends.”

Jeffrey says she was the best dressed girl in high school because she made all of her clothes. “Everything I made was unusual and interesting and I realize I had the heart and talent of a seamstress,” she continues. She added hairdresser to her talents after high school and put herself through college styling hair. “This year marks my 50th year as a hair stylist,” she proudly says.

Her love of costuming inspired her to move to New Orleans in 1971. “There isn’t any place in the world where you could live and have as much fun costuming as New Orleans,” she says. “We don’t just wear costumes for Mardi Gras; we have opportunities to costume all throughout the year, including Halloween and many of our festivals. It is also perfectly acceptable to wear a costume for a stroll in the French Quarter any time you wish” Then she smiles and continues, “It has brought me great pleasure to make costumes for myself and friends and I am always working on something.”

Today, Jeffrey is still pleasing herself with her sewing machine and nimble fingers. “One of my greatest current joys is making fancy bras for FestiGals Bodacious Bras for a Cause,” she says. Once again she wasn’t satisfied to just do fantastic bras; she had to push her talent up a notch. “I came up with the idea to convert some of the bras to pocketbooks.” The Bodacious Bra Pocketbooks have been a new sensation for the annual fundraiser that is a part of FestiGals. (Scheduled for July 28-30 at the JW Marriott New Orleans Hotel – www.festigals.org) She also stays busy making her bra purses for friends to throw as special favors from the Mystic Krewe of Nyx Carnival parade floats that roll on the Wednesday before Mardi Gras day. Her signature hand decorated bra-purse throws for Nyx have been a great hit since pocketbooks are the cherished theme throws, just as decorated coconuts are for the Krewe of Zulu parade and unique decorated shoes are for Krewe of Muses parade. 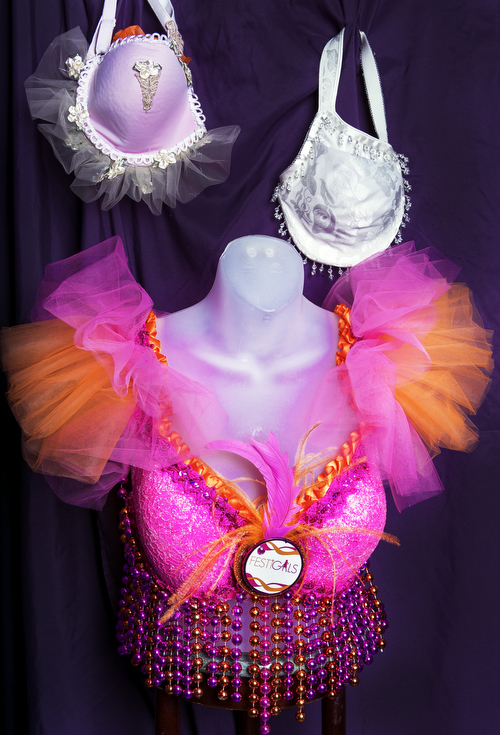 A Bodacious Bra Pocketbook? Indeed. Jeffrey now has a collection of amazing bras fashioned as pocketbooks. “It been a ton of fun and FestiGals can sell each one I make.” She is quick to point out that the fun festival that promotes the empowerment of women has raised more than $95,000 since 2012 from its Bodacious Bra Challenge. The money has gone to support women during the treatment and recovery of cancer.

She is proud to announce that she has worked at a hair salon in One Shell Square for 25 years. “My customers are my friends and some days I come to work as early as 6 a.m. to accommodate a customer’s busy schedule,” she says. She also explains that she can’t count the costumes she has made for her customers and their children or grandchildren as well as for her other friends over the years. “It’s all a part of my wonderful life in New Orleans where I can carry one of my Bodacious Bra Pocketbooks to Sunday brunch at a fine local restaurant and not cause a stir. In New Orleans you can please yourself by dressing as you wish. I wouldn’t live anywhere else.”