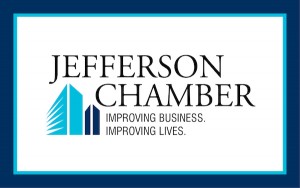 METAIRIE – The Jefferson Chamber will host its Annual Meeting, presented by Ochsner Health, on Thursday, October 7 at the Pontchartrain Convention and Civic Center. As one of the Chamber’s largest networking and social events, the Annual Meeting serves as celebration of accomplishments in 2020 and a preview of the exciting initiatives, events, and advocacy that we have already begun in 2021.

The Annual Meeting will be the first since January 2020. As such, attendees will hear from 2020 Chair Beth Walker of Ochsner Health and 2021 Chair John LeBlanc of Hibernia Bank. Headlining the presentations will be outgoing chamber president, Todd Murphy. “Todd’s Take” will speak to the state of the chamber, the parish, and the Greater New Orleans region as he wraps up his decade of service to the chamber.

Walker relocated from Cuyahoga Falls, Ohio to New Orleans in 2002 to participate in Ochsner’s Administrative Fellowship program and has spent her career at Ochsner touching almost all clinical departments at various levels of responsibility within operations. Prior to her current role, she served as Chief Operating Officer responsible for the ambulatory clinics and physician group practice at Ochsner Medical Center. In 2013, Walker was recognized by Modern Healthcare as one of 12 “Up and Comers” and in 2015, by Becker’s Hospital Review as a “Rising Star: 25 Healthcare Leaders Under 40.” Becker’s has also recognized her for four years running as one of the “Women Hospitals and Healthcare Systems Need to Know.” She is a graduate of GE’s Health Management Academy (HMA) Fellowship and is a Fellow of the American College of Healthcare Executives (FACHE).  She is also proud to serve as a certified Dare to Lead™ facilitator.

LeBlanc is the current Chairman of the Jefferson Chamber after previously serving as Treasurer and Secretary. For 30 years, he has worked as a community banker in Jefferson Parish. Prior to joining Hibernia Bank, LeBlanc was employed as the Chief Financial Officer of Metairie Bank and Bank of New Orleans. In addition to his service on the Jefferson Chamber board of directors, John has served as a board member of the New Orleans Regional Leadership Institute (NORLI).