Last Bacchus Sunday along the Uptown parade route, Jason Pippenger was introduced to a commercial crabber from Delacroix, LA. Pippenger, a financial services professional with Mass Mutual, hunts and fishes in Delacroix so he knew they’d have something in common. What he didn’t know was their brief conversation held amongst the airborne beads, the flowing beer and the Carnival revelry would lure him into a business enterprise making him the go-to-guy around town for fresh Louisiana seafood.

“He complained that his dock rates were really high, and he wasn’t getting enough money for his crabs,” Pippenger said about the chance encounter. “I told him I knew a few restaurant owners that I could get his product to faster and fresher, and he’d make more money.”

The crabber took the bait, and on that corner of Delachaise and St. Charles Avenue, Geaux Seafood was born.

“I have zero overhead,” Pippenger said about his Metairie, LA, start-up, where he earns commissions on deals without marking-up the product. “And that benefits commercial fishermen. I help them make more money and help restaurants with their food costs. I facilitate the supply of a better product at a better price point.”

Typically, when a commercial crabber, shrimper or fishermen pulls into a dock with a boat load of product, it’s the dock owner that usually buys all the seafood and markets it from there. Whether it’s sold to a processor or a distributor, that seafood can change hands many times, over many days, before ending up in a lunch or dinner entrée at a much higher price.

Through Pippenger’s growing network, bolstered by his connections made when working at the Hilton New Orleans Riverside as a director of stewarding and a meetings and conventions manager from 2002 – 2012, a shrimp or crab that’s caught and bought one morning could easily be prepared and served that night in one of many area seafood restaurants.

“New Orleans is always 1 degree of separation and I deal with fishermen from both sides of the River,” Pippenger said. “I advertise through social media and word of mouth, and I can tell you the fishermen are getting raped. I can compete with the docks who buy their product at low, low prices who then resell it. From the fishermen’s net, to the dock, to the wholesalers and the distributors, to the end users, the product is marked up all the way through the food chain, and the product gets older every step of the way. I want shrimpers and crabbers to be in charge. They're doing the farming. They should dictate the price when taking their goods to market. It's only fair.”

“Before, many of these hardworking fishermen didn't have a choice,” Pippenger said. “Now, with Geaux Seafood, the fisherman can get a better price for their catch, and restaurants can buy fresh, local seafood and sell it to locals and tourists at cheaper prices.”

“Jason goes straight to the fishermen and grabs what I need,” Will Varas, co-owner and chef at CoNola Grill & Sushi in Metairie, said. “He cuts the costs in half, and I get the freshest seafood I can find. Before cutting out all the middlemen and distributors I used to pay $6 – $8 per pound for shrimp. Through Jason’s Geaux Seafood, I pay $3 – $4 a pound.”

Varas said he was hooked, because when he buys from Geaux Seafood he can tell customers where the soft shell crabs in his sushi rolls or served panéed over grits with a roasted fennel salad actually came from.

“Larger distributors, they try and give you an idea where the seafood was caught,” Varas said. “With Jason, I know the exact day the seafood was harvested and what vessel it came off of. It’s great to pass along those facts and stories to our customers. I’ve found they like to know they’re eating fresh seafood from Hopedale or Black Bay. They can relate to that.”

As the Gulf of Mexico Fishery Management Council wraps up their 4-day conference in New Orleans today, many local crabbers, shrimpers and fishermen attended the meetings, and weighed in about tackling the influx of cheap farm-raised imports into their markets, the low prices they’re getting at the docks, the higher fuel costs they’re grappling with and the destruction of once-productive fishing areas due to the lingering effects of Hurricane Katrina and the BP oil spill. 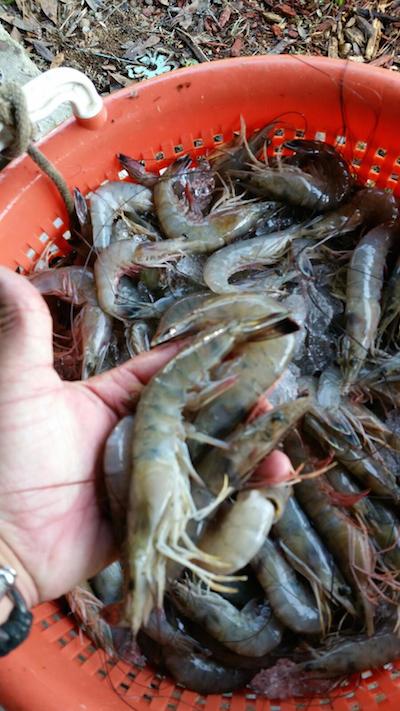 Geaux Seafood’s Pippenger said he’s been able to buoy the industry, helping many fisherman get a bigger bite of the action, even during these tough times.

“A lot of shrimpers are going out of business,” Chris Pomes, a dock owner and seafood wholesale dealer said. “The cost of shrimping is getting too high. They need to fill up with fuel, stock their boats with ice, pay for equipment, deckhands and labor, and for what? Cheap imported shrimp is flooding the market, and it’s harder for us to compete with the price. Two years ago our shrimpers were making $3 to $4 a pound at the dock. This year it’s $1.25 a pound. Shrimpers today are going crabbing instead.”

Pomes said he can buy up to 20,000 pounds of shrimp a day from 15 – 20 shrimpers and crabbers at his Hopedale, LA, dock near Lake Borgne and the Gulf of Mexico. Pomes contracts with a processing plant that comes in with an 18-wheeler to take the product away. Before it gets there, Pippenger steps in to select the pick of the harvest for Geaux Seafood.

“Jason buys 300 – 400 pounds of shrimp at a time for local restaurants” Pomes said. “They process them at the restaurants, so it’s fresher shrimp than getting them through a big distributor.”

“Ninety-five percent of Louisiana shrimp is shipped out all over,” Pippenger said. “I want to supply domestic product to domestic businesses that’s a better quality than cheaper farm-raised imports and at a better price. We’re creating commerce.”

At the Pomes Seafood Dock in New Orleans, by the Rigolets near Lake Pontchartrain, Pomes used to host up to 30 crabbers. Due to the BP oil spill and the floodwall built across the Mississippi River Gulf Outlet (MR-GO), Pomes said there are only 5 left at his dock, angling for the dwindling supply in the local waters. Pomes said he used to be able to buy up to 15,000 pounds of crab a day. Now it’s down to 2,000 pounds.

Pomes said once he buys the crabs at his dock, he grades them and ships 90% of the males to Baltimore, MD, and 90% of the females to buyers around the nation. The rest? Geaux Seafood.

“When I cook I only want to cook with fresh Louisiana seafood,” Sonny Nepveaux, owner of Couyon's Catering LLC, in Gretna, LA, said. “Jason provides the seafood I’m looking for, no matter the specific size or type of crab or shrimp I ask for. He always comes though for us.”

Nepveaux and business partner Ronnie Ory’s on-site catering company prepares BBQs, Seafood Frys and Boils for up to 1,000 people from Couyon's Catering’s mobile trailer. This January start-up, one-stop-shop prepares food for clients who host tailgate parties to rehearsal dinners to corporate events, and is making a name for itself in a niche market by serving up fresh, local fare pulling up right to their customer’s front door.

They think Geaux Seafood is a keeper.

“Before I started using Geaux Seafood I used to go to seafood markets, but you never really know what you’re getting,” Nepveaux said. “And if you can’t snag what you’re looking for you have to go somewhere else, or end up having to change your menu. It’s a lot of time wasted. With Jason, you know when and where the shrimp or crabs were harvested, and he’ll even tell you what boat it came in on. All I have to do is pick up the phone, call him, tell him what I need, and he finds it.”

From preparing his shrimp pasta to his boiled crabs to his Crabmeat Remick, Nepveaux said he knows through Geaux Seafood he’s saving at least 10% on food costs and is getting the freshest seafood he can get, at a convenience.

“Through Geaux Seafood, I don’t have to waste my time dealing with the docks,” Nepveaux said. “Jason handles it all for me. It’s a good business because of all his connections with local fisherman, and I know what I get is reliable. He connects local fishermen with restaurants and people like me.”

Nepveaux, a big believer in Mom and Pop enterprises like his own, said Geaux Seafood helps him support local fisherman directly, rather than buying his supply at big-box stores where he doesn’t know where the product comes from.

“When I call Jason and need shrimp, he can say he knows a fisherman in Lafayette and his boat is coming in Thursday with a load of shrimp I can have,” he said. “This way I know where my shrimp is coming from, and I know it’s going to be fresh.”

“Places like mine keep fishermen employed having bought straight from them,” Varas said of CoNola, which he’s co-owned with his wife and chef Kinsey and a silent partner for the last 9 months. “I tell Jason what I’m looking for, and he brings it to me straight from the fisherman right off the boat. It’s important for small businesses to support other small businesses. Small businesses are the backbone of the economy and we help by going through Geaux Seafood. In return we get fresh, quality seafood to serve our customers.”

Pippenger, who said he is insured and has a wholesale license for his fledging business, has one constant challenge – keeping up with the demand. He said he and his silent partner want to expand to the East Coast and from there, head westward.

“We’re good for restaurants and retailers who aren't big enough to get contracts with big wholesalers, and we stop them from having to spend the time and money to go shopping at various seafood retail outlets and be at the mercy of what they have for sale and what they’re charging for it,” Pippenger said. “My business is supplying these entities with a fresher product at a lower price. Wholesalers deal with volume, and most often the little guy gets left out. They need and deserve the options we can give them.”