Jambalaya Girl Mixes It Up

Sales for this local company’s gumbo and jambalaya mixes are up 40 to 50 percent in the past three years. 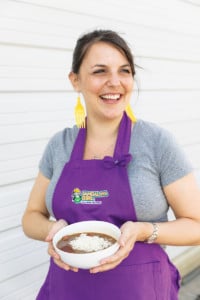 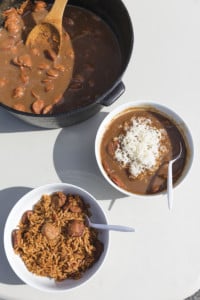 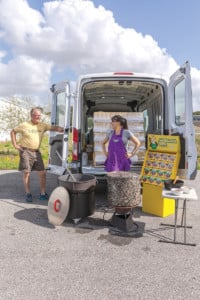 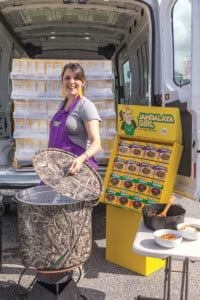 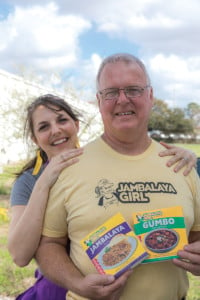 Through her quick meal “Jambalaya” and “gumbo” kits, Kristen Preau Moore, a.k.a. Jambalaya Girl, is spreading New Orleans love on a national level.

Jambalaya Girl marked its eight-year anniversary this past February with gumbo and jambalaya kits for sale in over 400 stores across the Gulf Coast, including regional Sam’s and Costco stores, and online sales in all 50 states through the company’s website and Amazon Prime.

“Our job is to take our taste of New Orleans on the road,” she said. “And we are proud to say that our products are made in New Orleans. It keeps it authentic.”

While Moore’s staff size is small at two full-time and three part-time, Jambalaya Girl has subcontractor employees at Magic Seasonings Blend in Harahan, where her products are made, as well as a national network of distributors. The company has continued to see growth over the past three years, at 40 to 50 percent over that time.

“The Jambalaya Rice Mix is our biggest seller and it’s packaged for retail, wholesale clubs and food service,” Moore said. “We even have schools across Louisiana using it in their cafeterias. However, the gumbo, which is a newer item, is showing significant growth rates – it outsold the jambalaya in most grocery stores over the past three months.”

Moore and her staff have worked on branding the company for the past four years. Originally called “Cook me Somethin’ Mister,” Moore realized the company’s name might not translate outside southern Louisiana. Asked about it at a meeting of marketing minds in New York while participating in the 10,000 Small Businesses entrepreneurship workshop hosted by Goldman Sachs, she found that her identity, and the identity of the brand, would naturally come together.

“When we got to New York, they said, ‘Why aren’t we talking about the elephant in the room…why aren’t you calling your business Jambalaya Girl?’ At that point I had the caricature — which was drawn for me by artist Ricky Nobile at a fundraiser where we were cooking up some jambalaya — and I had been wearing my fork earrings for some time. Everything was there, and so Jambalaya Girl was born.”
Moore’s well-known earrings were born out of another local passion, her alter-ego as a Saints football super-fan.

“The fork earrings first appeared at the Buddy D. Dress Parade after the Saints won the championship and a trip to the Super Bowl [in 2010,]” she said. “I led the parade with the super-fans. [Another super-fan,] Whistle Monsta, called me out and said I needed to step up my super fan game [to match] my Jambalaya Girl nickname, so I added plastic fork earrings, a mock cast-iron pot on my head and a golden paddle. Luckily, the fork earrings stuck, not the cast-iron pot on my head.”

Moore grew up surrounded by New Orleans cultural heroes, from Saints team members to world-famous Chef Paul Prudhomme, but in actuality, Jambalaya Girl was born out of necessity and is part of a long family tradition.

"It started with me and my dad going to my brother’s sporting events,” Moore said. “We would set up a tent and my dad would make these big batches of jambalaya. I would be the little sister standing there holding out bowls, and people would say, ‘Look at that little jambalaya girl!’ The name stuck. I guess it was meant to be.”

Moore’s father, a culinary inventor who pioneered specially designed outdoor cookers and burner stands for grills, boiling pots, cast-iron pots and double burner cookers, brought her along on his business travels, providing her with an early introduction to Louisiana cooking on all levels.

“[My dad’s] customers ranged from the top chefs in the city to festival vendors to homeowners. So the Louisiana culinary tradition that I grew up with was almost always cooking outdoors from the backyard to parking lots, with jambalaya, gumbo, crawfish boils, fish frys and many more. And carrying on this tradition, whether it was a business or not, was just natural,” she said.

Moore’s passion for New Orleans and Louisiana culture drove her to pursue a business that would bring a taste of the area to the world, although Jambalaya Girl was not her first stop, working first for the University of New Orleans, top ad agencies and an architecture firm, and even NOLA-themed mascot work, as Ms. Ima Dilla at Jazzland during high school.

“Actually, right out of college I wanted to pursue my own career path. My passion has always been to be an ambassador for New Orleans,” she said. “Once the opportunity struck to start my own business expanding on what my Dad had built, but on the food side this time, it was a no-brainer to make the leap. The Jambalaya Girl business is truly a perfect fit for my childhood cooking outdoors with my Dad, my social personality and my love for New Orleans.”

The work and notoriety of New Orleans chefs, like Prudhomme and Emeril Lagasse, trailblazed the way for Louisiana cuisine across the country and beyond, and allowed small businesses like Jambalaya Girl to flourish and bring personalized home cooking to families from coast to coast, according to Moore.

“I am grateful that Chef Paul Prudhomme created an international craving for Louisiana cooking that myself and so many other chefs and culinary entrepreneurs still benefit from today. He even helped put other culinary professionals in business. We work with one of Chef Paul’s original K-Paul’s team members, Chef George Rhode IV; and our products are specially blended at Chef Paul Prudhomme’s Magic Seasoning Blends.”

Nationally, premixed spice mixes (think Tony Chachere’s or Magic Seasonings) have seen a boom in popularity in the past five years. According to a 2016 Nielsen Answers on Demand report, spice sales in the United States rose 19 percent from 2012 to 2016, from $765 million to $927 million per year, with premixed herb and spice blends generating $3 million in sales during that period.
Moore believes the uptick in spice sensations has a lot to do with the love of Louisiana and the flavors of New Orleans home cooking across the United States.

“Wherever we go, people are interested in Louisiana cooking. We have so many great chefs and personalities, I think it really comes from an interest in the city,” she said. “Wherever we take our taste of New Orleans on the road, from San Francisco to New York or Rehoboth, Delaware to Des Moines, Iowa, people love the flavor of our jambalaya and gumbo. Many thanks [goes] to Zatarain’s, who was one of the first to pioneer the New Orleans box dinner mixes. Back when they were first promoting their mixes, my Dad was cooking jambalaya, but it was simply to promote his cast-iron cookers. And he said even back then, people loved his recipe. “

Moore hopes to catch the spice wave while making weeknight night meals a little bit easier, especially for busy parents. Jambalaya Girl’s mixes are prepared carefully, avoiding too much spice and salt, for a recipe that appeals to both kids and grown-ups alike.

“[This is] our take to share our flavor and taste of New Orleans,” Moore said. “Sure, we have differentiated our products from what’s currently on the shelves; it’s not as spicy, not as salty, more real vegetables, more seasonings for flavor. But what keeps us in business is that people love it and that’s what motivates us to hustle to get the word out. A lot of people outside of the Gulf Coast assume New Orleans food has to be spicy hot, seasoned with nothing but cayenne. It is important to me to share that the way we grew up cooking, New Orleans food is all about the flavor, not the heat. The beauty of our recipes is that there are so many ingredients blended together in the pot to excite all of your taste buds. It’s like a party in your mouth. And if it’s too heavy on the cayenne, you miss the party.”

Moore’s unique recipe and easy-to-prepare mix are designed to appeal to a wide array of consumers, impressing commercial buyers on a national level, as well as home cooks at local and regional chain stores, with the most recent to come on board at HEB grocery stores throughout Texas.

“We sell to caterers and chefs who appreciate the consistency and flavor of our products,” she said. “Some Louisiana parish schools have started using our industrial-size packages for their cafeterias. Working moms and dads love our products because they’re easy, quick and kid approved. College kids love learning they can make it easily in a rice cooker or Crock Pot. And people across the country continue to order it online because they love that authentic NOLA flavor. It’s been great that our customers have been the ones to spread the word for us. And it’s fun when we can trace new flourishing markets like Des Moines, Iowa and Richmond, Virginia, back to individual customers like Chelsea and Clark.”

While Moore and her team criss-cross the country cooking up jambalaya and giving cooking demonstrations, she has found the biggest business challenge to date has been simply getting people to try the product.

“Getting the word out about our products [is always a challenge,]” she said. “Our success thus far has been thanks to our customers, because once they try our recipes they love it. Whenever we meet a new customer, whether at an in-store demonstration or event where we’re sampling our products, I ask them to tell their friends. It’s a grass roots way of marketing, but it works.”

Moore and her team at Jambalaya Girl remain focused on bringing the cooking she grew up with at home, using family recipes for new opportunities for flavor.

“We just launched our Gumbo Base with Roux last year and it’s catching on even quicker than the jambalaya,” she said. “I made it from my Mom’s gumbo recipe — a dark, rich roux with all the seasonings and vegetables and similar flavor profile to our jambalaya. Our focus right now is to bring our products to more locations across the country, so our team will be on the road. We do have more recipes in the works too, so keep your taste buds hungry.”

This Opelousas-based spice and meal prep blend is so popular, we all just know it as “Tony’s.” Started by its namesake creator in 1972, it is still operated by the Chachere family and distributed throughout the Southeast, with mail order requests from across the U.S., Canada and abroad.

Chef Paul Prudhomme’s unique blend of spices and seasonings was born out of his world-famous New Orleans restaurant K-Paul’s Louisiana Kitchen. Magic Seasonings was launched in 1983 and has grown to produce spice mixes, marinades and more for sale in all 50 states and 37 countries around the world. Magic Seasonings also produces custom mixes and blends at the 125,000-square-foot facility located just outside New Orleans.

Perhaps the most well-known Louisiana flavor export is Tabasco. Tabasco brand products have been made since Edmund McIlhenny founded Avery Island back in 1868. With eight varieties of hot sauces, as well as condiments, snacks, drink mixes and more, Tabasco can be found in over 180 countries and territories around the world.