Is a JD a Good Investment?

According to the American Bar Association, students in the class of 2014 who borrowed money to pay for law school took on an average of $84,000 in debt if they attended a public school and $122,158 of debt for a private school education. Keep in mind these numbers are strictly for law school and do not include the cost of an undergraduate degree.

Additionally, within 10 months of graduation, just 71 percent of the class of 2014 landed long-term, full-time jobs for which passing the bar was required or a juris doctorate was preferred.

“I would suspect that since there have been lawyers, there has been debt associated with becoming a practicing member of the profession,” said Keith McDaniel, attorney with McCranie, Sistrunk, Anzelmo, Hardy, McDaniel & Welch. “Given recent news reports, what appears different now is that the associated debt has risen greatly, and/or the present body of debtors appears, as a group, resistant to the thought of managing debt and instead appears to desire governmental forgiveness of debt or default as the only means of addressing the debt.”

“I think that the amount of debt young attorneys acquire, both in their undergraduate and graduate studies, does affect the future of the industry because the job market has not kept pace with rising student debt.” -Christopher Hatcher, partner with Blue Williams

With the rising number of students getting law degrees, competition for jobs has increased and salaries have dropped. In 2007, more than 91 percent of law school graduates were able to get a job after graduation. In contrast, by 2013, that number had dropped to just 84.5 percent of graduates. Out of those, only 51 percent were employed in law firm jobs — well below the trend of the last 25 years according to the Association for Legal Career Professionals.

The association says this has pushed many graduates into lower-paying jobs in the public sector or even into a different field altogether. Of course, even if a graduate isn’t earning the salary they expected, the student loan debt still needs to be repaid.

“I think that the amount of debt young attorneys acquire, both in their undergraduate and graduate studies, does affect the future of the industry because the job market has not kept pace with rising student debt,” said Christopher Hatcher, partner with Blue Williams. “With a highly competitive job market, high debt and stagnant salaries, it is no longer worth going into debt to become a lawyer for many young people. This, combined with many law schools’ efforts to reduce the number of students they accept and thus graduate each year, is resulting in fewer young attorneys entering and staying in the legal field. Further, because many young attorneys are forced to take contract positions or hang their own shingles, the mentor programs so often associated with traditional associate/partner relationships are slowly dying off.”

In 2006, Congress extended the federal Direct PLUS Loan program to allow a graduate or professional student to borrow the full amount of tuition, regardless of the amount, as well as associated living expenses. The idea was to give more people access to higher education and thus, in theory, higher lifetime earnings. But broader access doesn’t mean much if degrees lead not to low-paying jobs but to large debt burdens, which is often the result with PLUS loans. 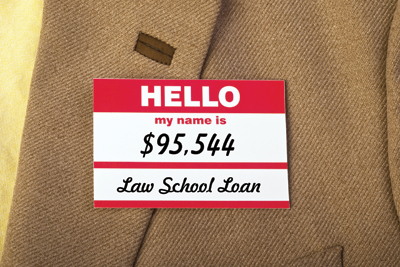 The consequences of the easy-to-get federal loans could have been predicted if one looked closely at the situation. First, law schools increased tuition fees and accepted more students, even after the legal job market stalled and shrank following the recession. For years, law schools were able to avoid discussing the declining job market by not publishing accurate, up-to-date employment information about their graduates. But in response to pressure from skeptical alumni and unhappy graduates, the schools began sharing the data, and in some cases it was not a pretty picture.

“The increasing debt that law students are amassing during law school is definitely affecting the future of the legal industry,” said Lynn Luker, attorney of counsel at Stanley, Reuter, Ross, Thornton and Alford. “The cost of law school and the size of debt a young person would accrue while in school make it difficult for many people to go to law school. I routinely talk to students at Tulane who are $150,000 to $200,000 in debt. Currently, the local job market is in a downward spiral, making it difficult for young people with extraordinary debt and constricted job opportunities to succeed. The reality of the situation is that around 50 percent of students are coming out of law school without a job.

“I now counsel students that if they are not seriously interested in the law profession then they should not go to law school,” she added. “They need to be totally positive that this is the profession they want to work in. Not a day goes by that I don’t wake up and am happy to be a lawyer: I love practicing law. Young people need to follow their passion and go to law school not because they want to be a fat cat lawyer but because they love it.”

This year the Obama administration extended the gainful employment rule, which ties a school’s eligibility to receive federal student loans to its success in preparing graduates for jobs that will enable them to repay their debt. The rule currently applies only to for-profit law schools, all of which, given their track records, would fail to qualify for federal loans. If the rule applied to nonprofit schools, as many as 50 could fail as well, based on one measure that considers students’ debt-to-income ratio. According to an article in The New York Times, a good idea would be to cap the amount of federal loans available to individual schools or to students. This could drive down tuition costs and reduce the debt loads students carry when they leave school.

“A small number of students graduating at the top of their law school class can command a salary large enough to service their school debt.” -Lynn Luker, attorney of counsel at Stanley, Reuter, Ross, Thornton and Alford

“A small number of students graduating at the top of their law school class can command a salary large enough to service their school debt,” said Luker, “whereas the larger number of average students that graduate end up getting a lower-paying job or internship with on-the-job training.”

Meanwhile, students in the class of 2014 who borrowed money to pay for law school took on an average of $111,899 in debt, according to data submitted to the U.S. News and World Report that ranked 182 institutions.

“Unfortunately I don’t think the average starting salary in the New Orleans market accommodates new graduates’ ability to pay their law school debt off,” said Hatcher. “In my experience, the Great Recession had a huge impact on starting salaries for associates. In 2008 and 2009, many law firms stopped or reduced hiring or hired with significantly lower starting salaries. The uncertainty that faced many businesses during that time period set a precedent for hiring that is only now slowly changing. Because the bar was set so low during this time, salaries have not kept pace with increased tuition and cost of living. This means that young attorneys today are faced with higher debt and lower pay.

“Younger attorneys are now required to pay more and live on less. Further, because many loan repayment programs are drawn out over 10, 20, or even 30 years, the prospect of paying a significant portion of your salary every month for multiple decades, seems to undercut the value of the degree,” he added. “Many young attorneys now work so that they can pay the minimum payments on loans that they took on so they can get a job to pay back these loans.”

The average starting salary in the New Orleans market varies based upon the size of the firm as well as the type of law practiced at the firm; however, generally speaking, the market seems to be in line with reported estimated national averages of starting salaries being between $60,000 to $95,000.

“Students thinking about a career in law should perform the necessary research that allows them to evaluate their career options fully, including potential earnings.” – Keith McDaniel, attorney with McCranie, Sistrunk, Anzelmo, Hardy, McDaniel & Welch

“Salaries at the bigger law firms are higher than those at the mid and smaller firms. The problem is that there are so many lawyers looking for jobs and not enough available jobs at the larger firms,” said Luker. “I have spoken to many young lawyers and heard stories of how they struggle after graduating law school. One young lawyer in particular is very smart and has a lot of common sense and recently graduated from a solid law school, one without all the bells and whistles, and by day he was practicing law but at night he was cooking pizzas in order to make a dent in his student loans. That’s the reality of the situation today.”

U.S. News and World Report recently released statistics ranking colleges across the nation based on law school graduates’ amount of debt and the percentage of students that had debt at the time of graduation.  The average amount of debt of the 2014 law school graduates who incurred debt in the state of Louisiana is as follows: At Louisiana State University (Baton Rouge) the average student debt was $89,471 with 82 percent of graduates incurring debt; Loyola University graduates incurred $117,892 of debt with 89 percent of graduates with debt; Tulane University graduates carried $77,067 of debt with 95 percent of students graduating from the school with debt; and Southern University (Baton Rouge) graduates accrued $140,965 in debt with 76 percent with debt.

“Students thinking about a career in law should perform the necessary research that allows them to evaluate their career options fully, including potential earnings,” said McDaniel. “The occasional million-plus verdicts that make the news are just that, occasional, and the potential law student should not encounter debt based upon some false assumptions of future earnings potential. To avoid debt, I recommend considering all law school options, public and private, and approach schooling seriously and with the aim of graduating at the top of their class.”