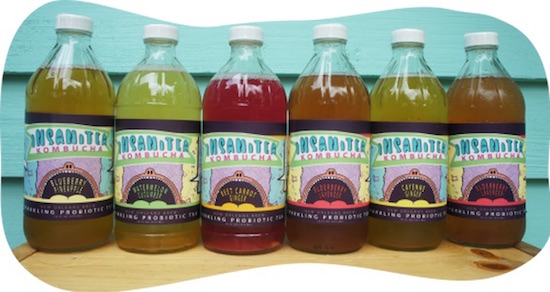 The current drink of choice of hipsters, aging hippies, health enthusiasts and older millennials is kombucha. For years it could be found in health food stores, but now, more and more conventional grocery stores are carrying the slightly vinegary, bubbly, fermented beverage.

Because we’ve become obsessed with superfoods, it comes as no surprise that the kombucha market is showing fast-paced growth. In 2018, this market was estimated to be worth more $412 million, growing 42 percent from 2017 according to Nielsen. And to signal its mainstream popularity, in 2016 PepsiCo acquired KeVita, one of the most well-known kombucha producers.

The drink has been around for centuries and was once known as the “tea of immortality.” Some posit in the late 1100s it may have filled the flasks of Genghis Khan as he and his warriors conquered the Silk Road.

Three years ago, looking for something to do and seeing a need in the market, Jordi Figueras started Insanitea Kombucha. In the beginning, he sold his product at farmers’ markets, giving away samples of his brew. Now, his product is currently in 50 stores, including such grocers as Canseco’s, Norma’s Sweets Bakery, New Orleans Food Co-op and the Daily Beet. He sells around 500 bottles per week.

Figueras has three part-time staff, two helping with production and one who coordinates marketing.

“We are small business,” he says. “We focus on small batches and use local ingredients. Our main goal is quality. We are hands-on and our product is pure, traditional and artisanal.”

The kombucha is brewed only using whole leaf organic tea, sugar and a symbiotic colony of bacteria and yeast known as the SCOBY, the thick, rubbery and cloudy mass that aids the fermentation process.

“It’s full of B vitamins along with healthy probiotics, minerals and enzymes,” he says. “It’s great for helping gut bacteria, which in turn helps with your immune system, digestion and energy.”

“The brewing process takes a couple weeks.” he says. “Then, we harvest and add the flavors.”

Figueras uses Edible Enterprises in Norco, Louisianna for production. Insanitea Kombucha is sponsored by the New Orleans Food and Farm Network, an organization that helps catalyze projects to fill critical gaps in the food system. The organization also provides support, capacity-building, and technical assistance to a diversity of food and farming projects.

Moving forward, Figueras says he is hoping to get into a few chain stores and build his product line to add to his current six flavors.