A former Packard car showroom in the South Market District transforms to meet the needs of an architecture and engineering firm.

Since 2012, the inviting offices of WDG | Architects Engineers have been housed in a circa-1901 brick building on Baronne Street. Partners in life and business, Ronn Babin and Peter Jolet own the South Market District-based firm.

Beer-loving New Orleanians who have visited Urban South Brewery and Second Line Brewing may already be familiar with some of the firm’s modern-industrial commercial work. The interior of the 9,000-square-foot, two-story space — originally a retail space for the Packard Motor Car Co., in what was then “auto alley” — features exposed ductwork and electrical conduits, as well as concrete floors and exposed brick walls, elements that are a nod to the WDG’s focus on industrial architecture and engineering.

“Peter and I purchased the building from the bank,” says Babin. “We were previously in the Entergy Corporation Building, paying a fortune. We wanted a space that better reflected our style, and a big draw for us to this building was the historic tax credits.”

Babin and Jolet stationed a staffer at the site full-time, took the building down to the bare walls and completed the project in three months to coincide with the end of their lease. 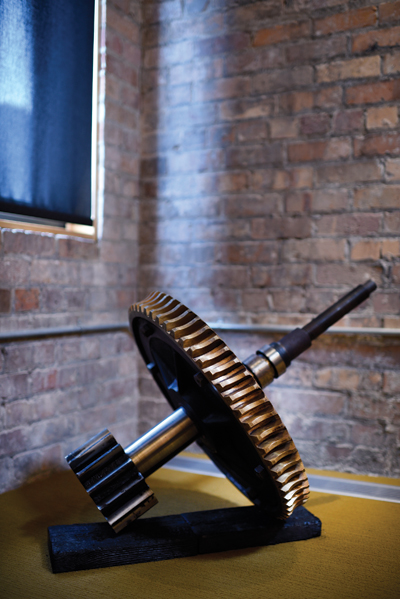 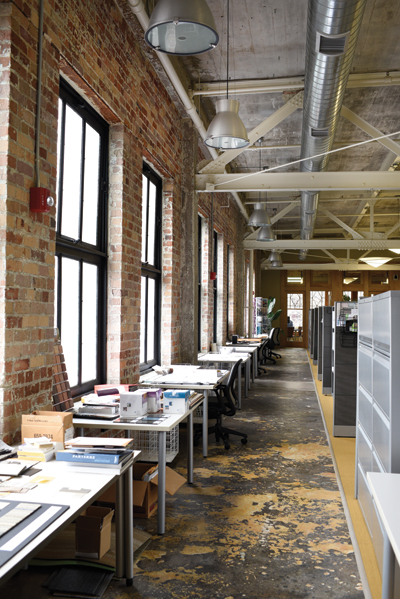 TOP LEFT- A gear from the automotive elevator turned conference room is used as a sculptural work in the room. TOP RIGHT- The exposed ductwork, electrical conduits, concrete floors and exposed brick walls are a nod to WDG’s focus on industrial architecture and engineering.

“We had a vision when we walked in,” says Babin. “The overall structural integrity was in tact. There were things here that historically, we couldn’t alter. Some of the paint we couldn’t take off the walls. We had an issue with a tile floor downstairs they wanted us to maintain.”

Despite these rules and restrictions typical with historical renovations and restorations, Babin says they didn’t feel constrained.

The use of a DIRTT wall system helped ease the transition from swanky high-rise to low-slung, industrial space. These moveable walls are considered furniture and can be relocated from building to building, or area to area within an office space, then reconfigured over time to suit the needs and growth of the company.

In its recent history, the building housed the offices of a group of lawyers. The space was awash in the seafoam green and mauve ubiquitous in the ’80s, as well as carpet and ugly skylights. A seafoam green square above the stairwell, which will at some point be home to a yet-to-be-determined piece of artwork, is all that remains of the paint job, as required by the historical commission.

Traces of the glue from the old carpet were left in place to create an amber pattern in the concrete floors. The pattern plays off the maple trim in the front conference room and upstairs offices, which also serve to warm the colder, more industrial design elements. Knoll furniture is used throughout the space, which was furnished by AOS. The lower level houses a reception area, as well as the company’s archives, an additional meeting room and an office space they lease out.

“I really love the way the elevator turned out,” says Babin. “That’s kind of our showpiece to clients.” 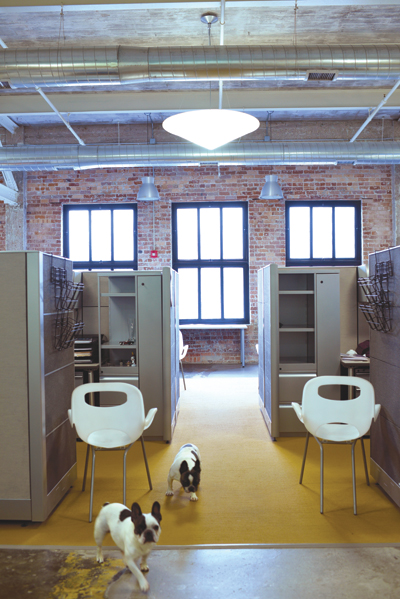 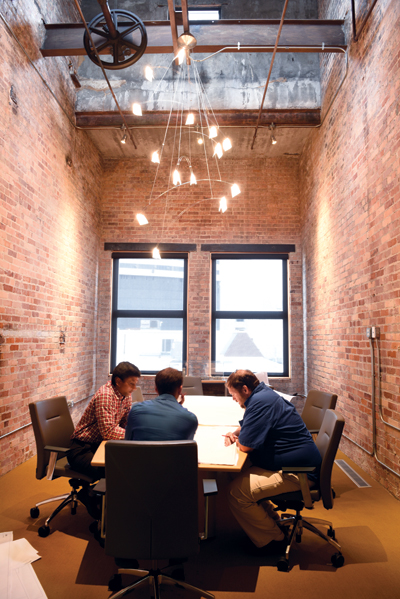 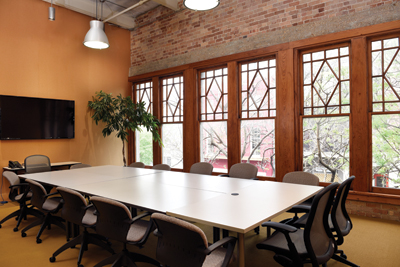 TOP LEFT- The open floor plan allows the architects, engineers and administrative staff to easily collaborate. Knoll furniture is used throughout the space, which was furnished by AOS. TOP RIGHT- With exposed beams and one of the elevator’s massive gears above and brick on all sides, the design of the elevator-turned-boardroom is at once a skillful reminder of the building’s past and an intriguing, attractive and functional space. BOTTOM- Two of the walls in the large, front conference room are made of cork. The front windows were stripped and preserved, adding warmth to the interior.

The building’s old car elevator now serves as a boardroom. With exposed beams and one of the elevator’s massive gears above, brick on all sides, and another of the gears serving as a sculpture in the corner of the room, the design of the boardroom is at once a skillful reminder of the building’s past and an intriguing, attractive and functional space.

“We love our space,” says Babin. “I haven’t had anyone come into this space and not comment on how great it looks.”

In fact, it seems many people don’t even have to enter the space to love the look of it. The building has been used in TV shows, such as CBS’ “Zoo” and “NCIS: New Orleans,” as well as ABC Family’s “Ravenswood.”

In addition to the more casual atmosphere — which Jolet and Babin agree is a better fit for their respective personalities and the personality of the company — the office serves as an example of the firm’s architecture and engineering.

“The one thing that resonates with me is we’re able to show our clients a space they can easily identify with,” says Jolet.

Most importantly however, is the impact the environment has on the people who spend 40 or more hours a week using it.

Main goal: Create a space that fit the company culture and personality while focusing on industrial architecture and engineering.