NEW ORLEANS – Independent movie theaters in New Orleans are counting on their connection to the community to get through the COVID-19 disruption.

The owners of the 105-year-old Prytania Theatre, which has been in existence since before the Spanish flu pandemic of 1918, rebuilt their business after Katrina and plan to do the same in the coming months despite a lack of any major Hollywood releases, uncertainty about when the city will allow them to re-open their doors and a likely limit on the number of customers allowed in per screening.

“I was here right after Katrina and saw the rebuilding process and saw the importance of having something like that in the community,” said Prytania general manager Eric Ramstead. “We’ve always been an underdog anyway but we are committed to being here for the community. We’re more than just a movie theater; we do field trips, community events, all kinds of stuff.”

Under normal circumstances, the theater has between 15 and 20 employees. Currently, all are furloughed – including Ramstead himself.

“We already work on a pretty thin margin and it makes sense in the big picture for the health of the business to do it this way right now,” he said. “Unemployment insurance is there for when you need it and this is the time when it’s needed – I’ve been paying into it my whole life.”

Ramstead thinks the theater will be allowed to open its doors in the second half of May. There will likely be new rules to follow, but that will be easier for the indie theaters to do. It also helps that the Prytania has plenty of seats.

“50 percent of our capacity is 150 people,” he said. “We’d be more than happy to have that many people. We might not even go to that extent even if they allowed us to. It really depends on what makes customers feel safe and what’s safe in the big picture because if you go about it in the wrong way you can definitely do way more damage than good. You can’t rush to open and pretend like nothing is wrong.”

Ramstead said one potential new tool in the proverbial toolkit is that the theater may finally be able to serve customers alcoholic beverages, which has become an industry standard.

“We’d been in the process of applying for a liquor license so we can serve beer and wine and be competitive with basically the rest of the theaters and the world,” he said. “Before all this happened we did get approved, although we’re still not 100 percent through the process. We still have some licensing to go through, but I think that will be just another key in helping us survive.” 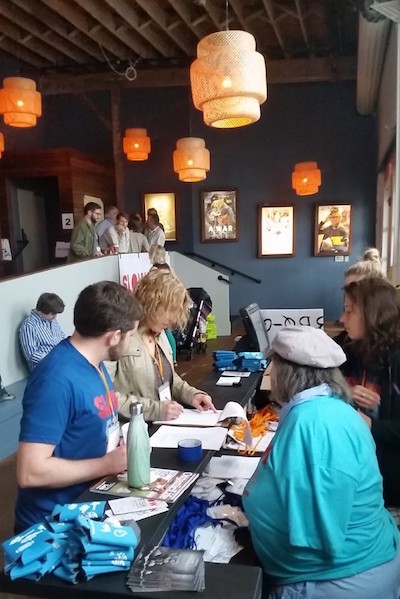 Crowds gather in the lobby of the Broad Theater

Brian Knighten, the owner of the Broad Theater, agrees that community relationships will be essential to keep the indie movie houses up and running.

“I think the theater business as a whole is going to take a pretty big hit for a couple of years, but locally owned and operated businesses like us, the Prytania Theatre and Chalmette Movies have a decent following and customer loyalty that will help us get by until this thing passes over,” he said.

The Broad, which houses four screens in a renovated 12,000 square-foot Mid-City warehouse, normally has a staff of about 25 people.

“We had to lay everyone off and because of these enhanced unemployment benefits pretty much all of our staff members are making more money on unemployment than they were being employed, which is going to be a big trick,” said Knighten. “We applied for the Paycheck Protection Program money and got it yesterday but the way it works is you have eight weeks to spend the money and hire your staff back … but it’s really the timeline that’s making it difficult. We don’t need the money now; we’re going to need it when we reopen.”

Knighten, who also owns a contracting business, said he expects the theater to make about half of what it normally would for the rest of the year.

“It won’t be pretty but we can get by,” he said. “Overall, I feel positive about the business. Our customers love us and we’re in the best neighborhood in town on a great street. All of those things are going to help us get by as they will most small businesses in the city. We’ve done a ton of community events and I think those people will be there when we need them.”

Meanwhile, virtually all major releases from the big Hollywood studios have been delayed. Wonder Woman 1984, Top Gun: Maverick, No Time to Die, Ghostbusters: Afterlife and dozens of others will either come out later this year or move to 2021. So until late July at the earliest, the Broad and the Prytania will be getting creative with their programming.

“We’ll show kids movies, late-night movies, retro movies and classics,” said Ramstead of the Prytania. “If we have to put together some programming to survive off of that for a month or two, I believe we can do that. The one good thing that we have going for us is that we are a local business, we are part of the community. We’ve been that way for a long time and so if we come back for them so hopefully they come back for us.”