NEW ORLEANS — Tulane University finance professor Peter Ricchiuti and Annette Sisco, an editor for the Advocate/Times-Picayune, have co-authored a new book titled “Being Your Own Boss Is Terrific: Unless you’re calling in sick … because then you know you are lying!”

Available on Amazon, the tome is a collection of entrepreneurial stories based on some of the interviews Ricchiuti has conducted over the last decade for his weekly “Out to Lunch” business podcast and WWNO radio show. The conversations — often recorded during a meal at Commander’s Palace — were described by one guest as “like Shark Tank with no money and nicer people.” In the new book based on the show, Ricchiuti also offers practical (and often humorous) tips for anyone starting a business. 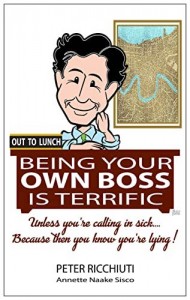 “After almost 11 years of interviewing the area’s entrepreneurs and small business people — about 850 in all — I had developed a whole bunch of interesting and inspiring stories that I included in my speeches,” said Ricchiuti, who said he has delivered more than 1200 presentations in 47 states and several countries. “Audiences really enjoyed them and I thought I should write them down while they were still fresh in my mind.”

For help writing, Ricchiuti approached Sisco, who co-wrote his previous book “Stocks Under Rocks,” about the investment lessons he learned from 20 years of running Tulane’s student stock research program Burkenroad Reports. The pair selected 36 of the most engaging stories and organized them into 12 chapters. There is a business lesson at the end of each chapter.

“It was an excellent pandemic project and we spent many an afternoon in our masks exchanging ideas,” said Ricchiuti. “I wanted it to be very funny, and I think we got it. … Clearly, the hardest part was culling it down to just a few dozen entrepreneurs. Each week I meet so many incredible people and the show has made me the most optimistic guy in town.”

The book took about 18 months to complete. Ricchiuti said he kept thinking of new anecdotes until eventually Annette (and his wife Laurie) “had to take it away from me. And that’s why it’s done today!”

The project makes clear how much affection Ricchiuti has for the business people he’s met while making the show — and how evangelical he is about their work.

“I sometimes refer to both the show and the book as “entrepreneurship for the rest of us,” he said. “Many people will say, ‘Oh, I could have come up with that.’ But, here’s the thing: you didn’t and they did.”

There are common traits linking the entrepreneurs who’ve been guests on “Out to Lunch.” For one thing, almost all of them have experienced failed entrepreneurial ventures in the past, and “what surprised me is that they didn’t try to hide this,” said Ricchiuti. “They kind of bragged about these. It is sort of a merit badge for these folks.” Another commonality: “They each had several other ideas lodged in their heads and most never wanted to go back and ‘work for the man.’”

Ricchiuti said some are seeking fame and fortune while others want to bring jobs to their community or serve as role models. Interestingly, most don’t want to scale their companies. They value a work-life balance.

“Over time, I realized that nurturing the area’s entrepreneurs was really the best hope for growing the New Orleans economy,” said Ricchiuti. “Let’s face it: New Orleans is weird. And that’s why we love living here. But this makes it difficult to attract existing businesses. Most big companies are attracted to ‘cookie cutter’ places to move or expand their businesses.

“I think I’m most proud that the show seems to raise the pride of the people who live here. I hope the book does the same thing. So many people tend to focus on the area’s negatives (crime, potholes and education, and rightfully so) and have no idea about these fascinating success stories. … For instance, how many people know that the rocket to Mars is being built in the 9th Ward?”