NEW ORLEANS – Today, Monday, August 29, 2016, Mayor Landrieu, city officials and residents of the City of New Orleans took part in an early prayer service at the Hurricane Katrina Memorial, 5056 Canal St., in memory of the victims of Hurricane Katrina, at 8:29 a.m. 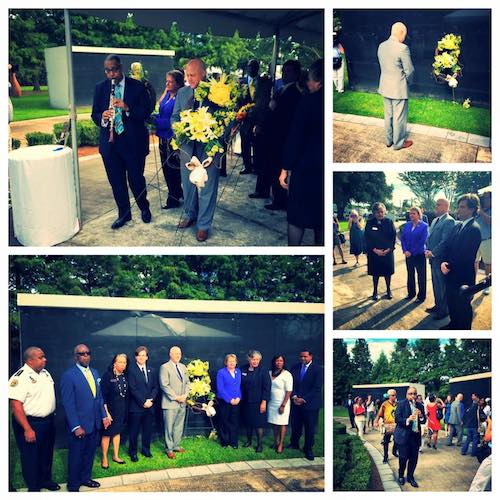 The Data Center, the local authority for tracking post-Katrina recovery with The New Orleans Index, developed in partnership with the Brookings Institution, released the following facts and figures reflecting the impact of Hurricane Katrina 11 years ago:

Flooding – When the levees protecting New Orleans failed in August 2005, approximately 80 percent of the city was flooded. The business district and main tourist centers were relatively undamaged, but vast expanses of many New Orleans neighborhoods were inundated, making Katrina the largest residential disaster in U.S. history. The extent of damage varied greatly from one part of town to another. Some areas received one foot of flooding while others were submerged by more than 10 feet of water.

Deaths – Hurricane Katrina and the levee failures resulted in the deaths of at least 986 Louisiana residents. The major causes of death include: drowning (40%), injury and trauma (25%), and heart conditions (11%). Nearly half of all victims were over the age of 74.

Displaced residents – The storm displaced more than a million people in the Gulf Coast region. Many people returned home within days, but up to 600,000 households were still displaced a month later. At their peak, hurricane evacuee shelters housed 273,000 people and, later, FEMA trailers housed at least 114,000 households.

Housing damage – Katrina damaged more than a million housing units in the Gulf Coast region. About half of these damaged units were located in Louisiana. In New Orleans alone, 134,000 housing units — 70% of all occupied units — suffered damage from Hurricane Katrina and the subsequent flooding.

Recovery funding – Of the $120.5 billion in federal spending, the majority — approximately $75 billion — went to emergency relief, not rebuilding. Philanthropic giving, while more than double the giving for either the 2004 South Asian Tsunami or 9/11, was only $6.5 billion. Meanwhile, private insurance claims covered less than $30 billion of the losses.

(1) Not all people that left the city within the year following Katrina were involuntarily displaced, nor were all people who moved to the city returning residents.

(2) Damages include all financial losses directly attributable to Katrina (damage to buildings, infrastructure, vehicles, etc., irrespective of whether insured or not). This includes business interruption directly due to building damage, but does not include indirect financial detriments such as loss of earnings by down-stream suppliers, shortfall in GDP, nor non-economic losses. All figures are presented in 2005 dollars.

PHOTO CAPTION: Mayor Mitch Landrieu, city officials and residents of the City of New Orleans take part in an early prayer service at the Hurricane Katrina Memorial, 5056 Canal St., in memory of the victims of Hurricane Katrina, at 8:29 a.m.