How Truckers Can Become Heroes

There is no place in the country where human trafficking is not happening.

Elisabeth Barna, Chief Operating Officer and Executive Vice President of Industry Affairs for the American Trucking Associations (ATA), said that truckers are in a unique position to help identity victims and traffickers alike, and that those efforts can help bring an end to this modern form of slavery.

“There are over 3.5 million professional truck drivers on our highways and we are truly the eyes and ears of the roads,” Barna said. “If professional drivers are aware of what human trafficking is, are trained, and make that call – they can immediately save lives.”

Barna stressed how essential it is for any suspicions to be reported, even if the witness is uncertain of how serious they are.

“Many truck drivers are on the same routes each day and will recognize a situation that may stand out,” she said. “Other drivers take different routes across the country and see an awful lot. You may not be sure it is a trafficking situation, but no call is a bad call, and you could save a life. The authorities take it from there and investigate the situation.”

Organizations like the ATA and Truckers Against Trafficking (TAT) are doing their part to train truckers for the best ways to detect the signs of human trafficking and how to bring that information to the authorities.

In January 2018, the bipartisan “No Human Trafficking on Our Roads Act”, sponsored by Rep. John Katko (R-N.Y.) and signed by President Trump, requires the U.S. Department of Transportation to issue bans on professional drivers who are issued felonies for using commercial motor vehicles for trafficking.

The ATA launched its own campaign, Truckers Move America Forward (TMAF), to raise awareness through its online channels by sharing educational materials and human trafficking facts throughout the month of January, which is National Slavery and Human Trafficking Prevention Month. UPS drivers, pilots and service providers are even joining the cause; in 2018, UPS airline employees will receive anti-trafficking training for the first time.
“The trucking industry lives in every community and delivers to every community,” Barna said. “The industry is not only saving lives by educating on highway safety, but they are now saving lives by focusing on those affected by human trafficking.  We are a very patriotic industry and continue to serve America in each and every way possible.”

What to Look For
• Fear and lack of familiarity with or knowledge of their community or whereabouts.
• Limited or controlled communication; not allowed to speak for self.
• Not wearing shoes.
• Radio chatter implying commercial sex or flashing lights signaling location.
• Not in control of own identification/passport.
• Acknowledgement of pimp or making a quota.
• Branding of trafficker’s name.
• Minors being transported in groups.
What to Ask
• “Are you traveling alone?” If not, ask who they are traveling with.
• “Does your family know where you are?”
• “When was the last time you were home or saw family?”
• “Do you keep your own money?” If not, ask who does.
• “Are you physically or sexually abused?”
• “Are you being threatened? What is the nature of the threats?”
What to Do
• Collect as many details as you can about the victim, the trafficker and/or the vehicle they are traveling in. Never approach a suspected trafficker on your own.
• Alert the manager of the truck stop.
• Call 1-888-3737-888, the 24/7 National Human Trafficking Hotline. Calls remain completely anonymous. If you’re not sure, report it anyway.

Human trafficking in the United States

• Human trafficking happens in all 50 states.
• An estimated 24.9 million victims are trapped in modern-day slavery. 71% of trafficking victims worldwide are women and girls. 29% are men and boys.
• Victims spend an average of 20 months in forced labor.
• There is no “perfect victim.” Trafficking can happen to virtually any person in any context.
• The process of coercion, transportation and restraint is usually an organized effort involving more than one trafficker. Most victims are moved constantly.
• According to the 2017 State Department Trafficking in Persons (TIP) report, there were only 14,894 prosecutions and 9,071 convictions for trafficking globally in 2016. 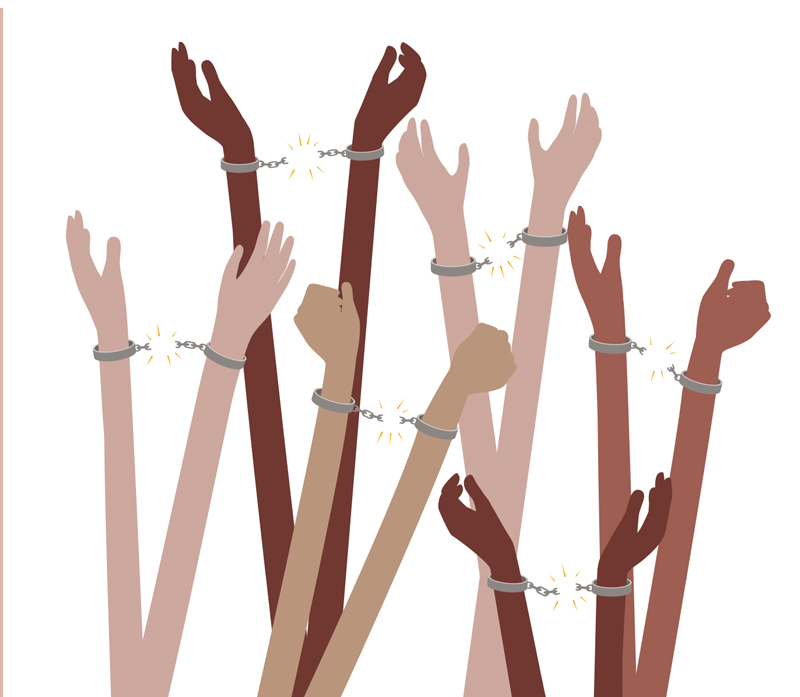