A look at the issues facing developers of downtown hotels

A renaissance has taken place in downtown New Orleans in recent years.

One by one, buildings that have stood vacant or underutilized for years have been transformed into luxury hotels and apartment buildings that are drawing a younger demographic to the heart of the city.

This past year alone has seen the opening or reopening of the Ace Hotel, the Catahoula Boutique Hotel, the Aloft Hotel, the Q&C HotelBar, and the Moxy New Orleans in the Central Business District (CBD) and the Warehouse District. Many of these new hotels attract two markets: young tourists who want boutique accommodations and locals in search of new haunts.

As of March of this year there were more than 38,000 hotel rooms available in the greater metropolitan area according to the New Orleans Convention and Visitors Bureau.

However, the transformation from office building and furniture showroom to hotel, as was the case with The Ace Hotel, doesn’t come without its share of legal hurdles. With historic buildings, particularly in historic districts, developers have to comply with strict guidelines imposed by the city and preservation organizations to maintain the historic integrity of the building and its surrounding neighborhood while still serving a commercial and residential purpose.

“Possibly the biggest question I hear from developers has to do with land use,” says G. Wogan Bernard, a partner in Chaffe McCall’s business and real estate section. “They have to consider, ‘Can you take an old building and make it into a hotel?’ A hotel requires a lot of amenities that an office building didn’t necessarily have, such as parking space and other service entities.”

Since a large percentage of hotel developments in downtown New Orleans are historic renovations, the developer has to follow guidelines put in place under the city’s comprehensive zoning ordinance, as well as guidelines set up by historic tax credit programs at state and federal levels.

“Let’s assume you can do a mix-used development,” Bernard says. “The developer has to look at whether they are able to meet the parking requirement, whether they have the necessary service areas, and if they have to restructure certain parts of these developments to meet certain needs.”

These questions fall under land use, which in New Orleans is determined by the city’s new comprehensive zoning ordinance. The CZO oversees land uses for each zoning district. It governs factors such as height limits, setback requirements, urban design standards, operational rules, and other regulations. It also sets requirements for the types of amenities needed per project.

Despite setting strict guidelines, David Halpern, a partner in the New Orleans office of Kean Miller, says the historic tax credit programs and the new CZO have created a permissive view toward hotel development in the CBD and Warehouse District.

“We are witnessing a robust tourism industry, coupled with the renewing effect of the biomedical corridor,” Halpern says. “There is a huge concentration of development happening downtown.  People want to live in these neighborhoods again.”

Although it can be a legal hurdle for developers, the CZO functions as a mechanism to prevent the influx of tourists and new residents from creating a strain on city services in newly popular neighborhoods, such as the Warehouse District and the Central Business District.

For example, the CZO sets a height requirement of 65 feet in the downtown neighborhoods on new buildings. This guideline is meant to limit the number of hotel rooms that can be added in a new construction or renovated building.

The CZO also establishes a height restriction per floor so that rooms have to be a certain height and ceilings can’t be lowered in order to create space for more rooms to work around the 65-foot height restriction.

“It imposes necessary limitations on construction so that the integrity of a neighborhood stays intact while still allowing for new developments within those rules,” Halpern says.

Bernard adds that because a hotel requires a lot of amenities, the developer has to look at what variances and waivers will be needed to make a project work.

“People don’t realize you can only do so much with historical rehabs,” he says. “They have to consider how to balance maintaining the historical integrity of a building to fit with the needs of the hotel.

“Certain hotels require the lobby to be on a higher floor to make room for parking space or other amenities,” he adds. “The historic facade of a building can’t be tampered with. Look at the Queen and Crescent Hotel or the Ace Hotel, where the signage was not placed on the actual building.”

The Ace, at 600 Carondelet Street, is an example of the balance that developers face in creating a modern hotel in a historic building. The 234-room hotel opened earlier this year in an art deco building commissioned originally in 1928. The first two floors were formerly used as showroom space for the Max Barnett furniture store. Domain Companies bought the nine-story building for $5.5 million in 2013 and hired architecture firm Eskew + Dumez + Ripple to oversee the renovation. 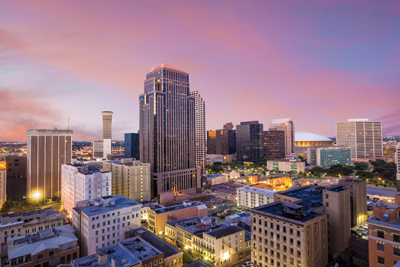 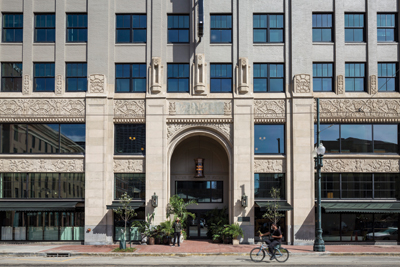 LEFT: There are currently approximately 38,000 hotel rooms serving guests in Metro New Orleans, according to the New Orleans Convention and Visitors Bureau. Photo Thinkstock  RIGHT: A shining example of a redevelopment of an historic building, the new Ace Hotel now occupies a 1928 building that previously served as a showroom for the Max Barnett furniture store at 600 Carondelet St. Photo Fran Parente

“A historic building can often limit the opportunities for how the space can be used because of scale,” said Steve Dumez, the lead architect on the project. “With the Ace we needed column- free space to fit the need for open expanse of space on the first floor.”

Developers at the Ace incorporated additional retail and meeting space by building on an adjacent parking lot, thereby avoiding structural changes to the historic part of the building.

“We were able to do new construction and build on the parking lot, which also allowed us to increase the guestroom count,” says Dumez. “Without that space we would have been very limited.”

The federal historic tax program has no maximum cutoff. The program offers a 20 percent income tax credit for the rehabilitation of historic, income-producing buildings that are “certified historic structures,” according to the National Park Service. Every year the program approves approximately 1,200 projects, leveraging nearly $6 billion annually in private investment in the rehabilitation of historic buildings across the country.

At the state level, there is a 25 percent state commercial tax credit that was created in 2002 by the Louisiana Legislature to encourage the redevelopment of income-producing historic buildings in downtown development districts. To qualify for the program, rehabilitation projects have to exceed $10,000 in qualified rehabilitation expenses and must be completed according to set standards. Once the credits are earned they are fully transferable and can be carried forward for up to five years.

Although these programs can help bridge the gap for costs that arise from redeveloping historic buildings, they provide a strict set of guidelines that also protect the historic structure.

The renovation of the 108-year-old Jung Hotel property on Canal and LaSalle streets presents its own set of complications, says Allan McDonnel, president of McDonnel Construction Services. The firm was selected as the contractor to renovate the building, which sustained severe damage from flooding after Hurricane Katrina. For a time, the 600,000-square-foot, 17-story building was considered the largest convention hotel in the South, taking up one entire city block. Its renovation plans include a mix of retail, commercial, hotel rooms and apartments. The project is being financed in part through federal and state historic tax credits.

“The building meets CZO requirements from a real estate perspective,” says McDonnel. “However, the building was constructed over three phases, and building codes have changed dramatically over that time, so we see a series of non-conforming issues.”

Because the hotel was built over several time periods, it doesn’t fit modern codes when it comes to energy calculations, compliancy with the Americans with Disabilities Act and fire codes.

“A building like this, that is not code compliant, will require us to look at factors such as widening corridors and reconfiguring stairs to meet modern building codes,” McDonnel says.

Buildings are also required to have windows that can withstand 150 pounds of force, so the windows will have to be replaced as well.

“Repurpose and reuse are popular terms in the development world right now in New Orleans,” adds McDonnel. “The Jung Hotel project falls under the umbrella of reuse since it is being brought back to its original use as a hotel. Upgrading the building to current building codes is the biggest task at hand.”

Projects like this, Bernard says, can be a risk for developers. “Projects can often go over budget — nowadays the electrical is completely different than what you had back then,” he says. “Developers have to look at how to mitigate those risks and see if the plan works within the city codes. The plans for these developments are constantly adjusted to meet historical, cost and legal requirements.”

Jay Cicero to Be Inducted into Louisiana Sports Hall of Fame