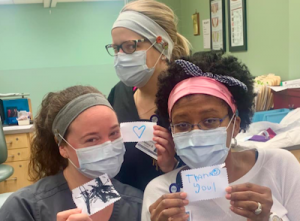 NEW ORLEANS – Seamstresses everywhere have been answering the call to craft homemade surgical masks, but the recent trend has a few problems, the first being that not everyone has a sewing machine, the supplies and the skills to create masks. The other is that many hospitals have not been accepting them.

“Unfortunately, not everyone is allowed to wear a homemade mask,” said local wound care nurse Donna Belette. “But there is something that many of us who are now wearing surgical masks all day would love to have.”

That thing is very simple: a stretchy headband with buttons on each side.

“Like me, a lot of physicians and nurses have been complaining of their ears being rubbed raw,” said Belette. “It gets uncomfortable, which makes you want to adjust your mask, but if you do that you risk contaminating it and having to use up another mask, so you just have to deal with it.”

Belette said she was recently inspired by a photo another nurse had posted on Facebook that showed her wearing a headband with buttons that acted as replacement ears to hold her mask.

“I thought, ‘That would be wonderful!” said Belette, who quickly shared the photo on her Facebook on March 26 with the note, ‘If you want to help healthcare workers. Consider making these. Nurses and doctors are in pain.’”

A few friends were quick to respond, including local attorney Amy Yacorzynski.

“I saw the post and thought, ‘That’s something I can do,’” she said. “I stopped by a Dollar Tree and bought up all their headbands — around 50 of them — and buttons and I just sat around sewing and watching Grey’s Anatomy for like four hours and was able to finish them all.”

The current working pattern is to attach a pair of smaller buttons, side by side, on each side of a stretchy headband, spaced about 7 inches apart.

Yacorzynski said she is delivering the headbands to Belette, who has had interest from both male and female coworkers.

“It should be enough to fill the requests Donna has had so far,” said Yacorzynski, but that’s just one place.”

Belette said the need is great, especially at local nursing homes, which have been hit hard by the current pandemic.

There’s currently no organization officially collecting and distributing headbands, so Belette advised those looking to help to reach out to a friend in healthcare or contact a local hospital, clinic, home health agency, nursing home or companies like grocery stores to offer up headbands.

Belette said the ones she’s received have already made a difference for her and her coworkers.

“I’ve been wearing one for a few days and it’s been a life-changer,” she said. “The pain is gone.”