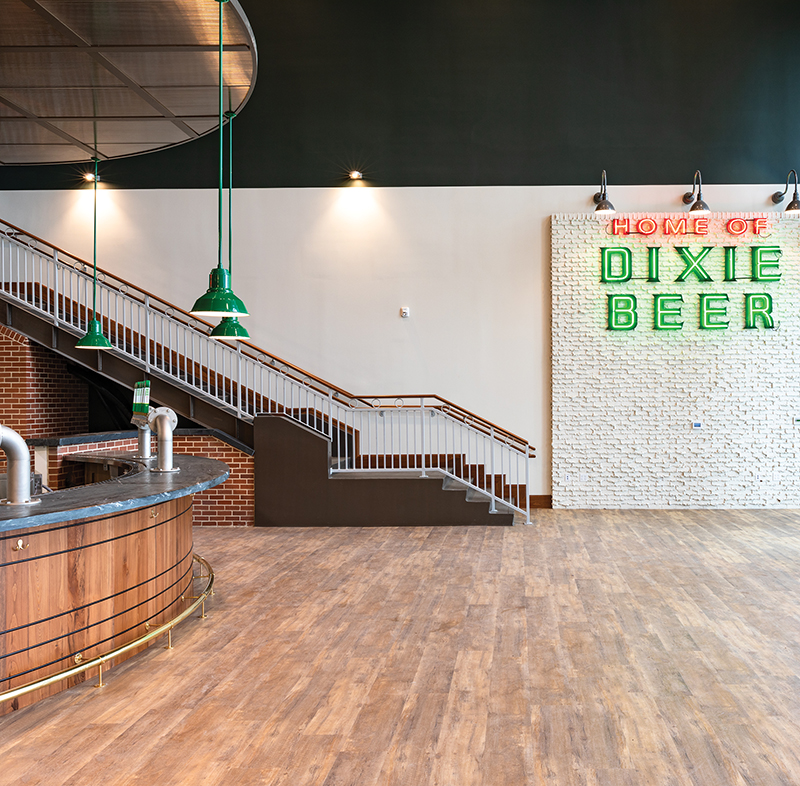 Dixie Brewing Company was founded in New Orleans in 1907 and brewed locally on Tulane Avenue until 2005 (except during a period in the 1920s after Prohibition-era raids uncovered “a little rule breaking,” according to dixiebeer.com). After Hurricane Katrina destroyed the brewery, Dixie Beer was contract brewed out of state. The late Tom Benson and wife, Gayle, bought a majority stake in the brewery in 2017, quickly announcing plans to bring brewing back to New Orleans. In 2019, their plan came to fruition: They returned brewing operations to New Orleans, built a new brewery and made plans for a host of new products. On Jan. 25, Dixie’s 85,000-square-foot facility opened to the public. Familiar elements from the old brewery combine with a new, modern design that includes a 5,000-square-foot tasting room and an over 100,000-square-foot outdoor area.

“[The] standout feature of the design is the Dixie Tower and Dome,” said Jim Birch, Dixie’s general manager. “It is lit up at night and is the first thing a guest sees upon entering the property or traveling on Interstate-10 across the high-rise. The Dixie Tower is so iconic to the brand and will take on additional significance with the new packaging we are about to introduce.”

Checkerboard retail tiles and old neon Dixie Beer signs lend vintage flair to the extensive wood flooring, woodwork bar, modern metalwork, and modern wood-and-metal tables and chairs in the taproom. The beer garden has a shaded area, as well as a bocce ball court and a fire pit.

Birch says two of the company’s biggest challenges are “becoming a must-see destination for both New Orleanians and tourists — a bit outside the French Quarter,” and “educating our customers to expect Dixie Beer to be the freshest and high quality beer products we have ever produced.”

While Birch says the primary focus is on lager beers (“Think German-inspired lagers, pilsners, helles, dunkels and bocks,” he says), in an effort to offer something different amidst the large and still growing New Orleans and Louisiana craft beer scene, the company also is brewing up a line of new suds under its Voodoo label.

“In the early 1980s we were the sole surviving brewery and now we’re back to join an eclectic, fun and rapidly evolving local beer scene,” says Birch. “We are ecstatic. Dixie Blackened Voodoo is our inspiration and entryway into craft. We’re introducing Crimson Voodoo, a white ale with raspberries, Voodoo Queen, a hazy IPA, Voodoo Doll, a ‘li’l’ IPA, or session IPA, and Midnight Stout, [both] in cans and draft [in] January. Look for them in full distribution by the end of March.”

The more than 112-year-old company has a long and storied legacy to uphold, and Birch attributes its success to the employees.

“Mrs. Benson and [minority owners] Joseph and Kendra Bruno are strong advocates for making Dixie as successful as possible, while giving back to the community, investing in training and development, and being faithful to continuing Dixie’s legacy for another 100 years,” says Birch. “We work hard together all week, we’re focused on safety and quality, and we’re making a product that is meant to be enjoyed with others to make more ‘Dixie Memories.’”

“Our goal is very simple: to be the No. 1 selling beer brand in New Orleans once again, and to help lead the transformation of New Orleans East into an economic powerhouse for the city.” 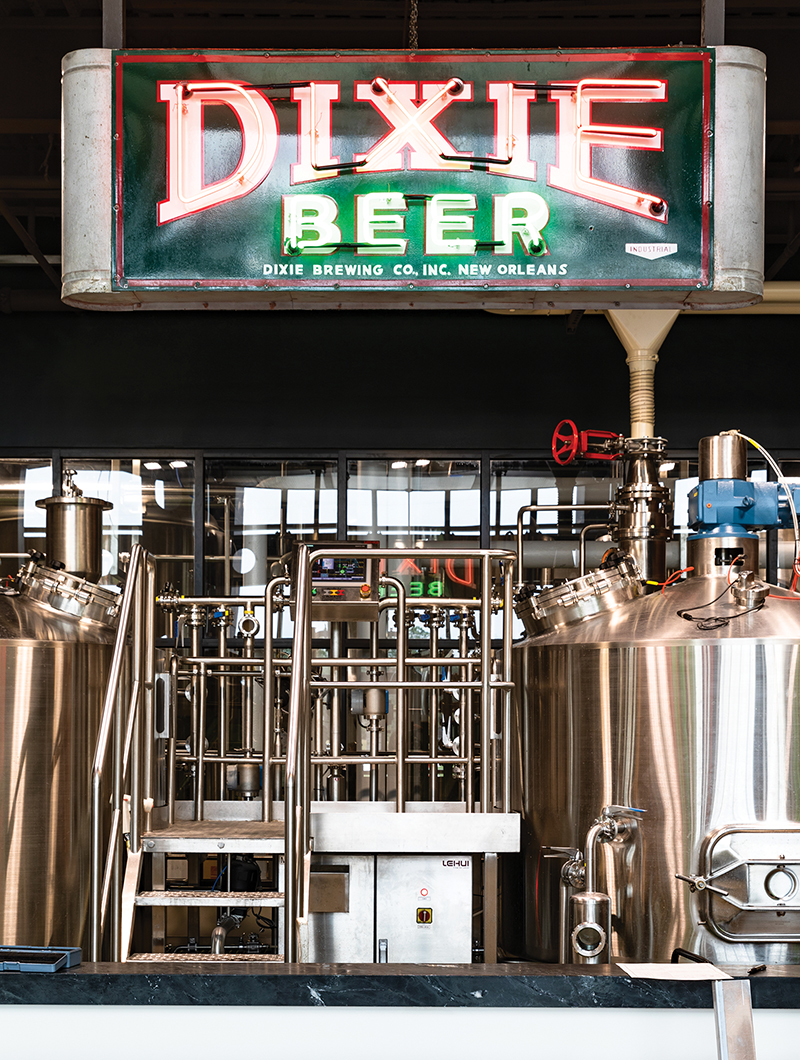 The new Dixie Brewing Company brewery and taproom was designed and built by Woodward Design + Build, with the interior managed by FirstKey Consulting out of Canada. The 85,000-square-foot brewery has an impressive 100,000-square-foot outdoor space that features a fire pit, covered seating and bocce ball area.

Number of Employees
50 to start; adding headcount commensurate with demand 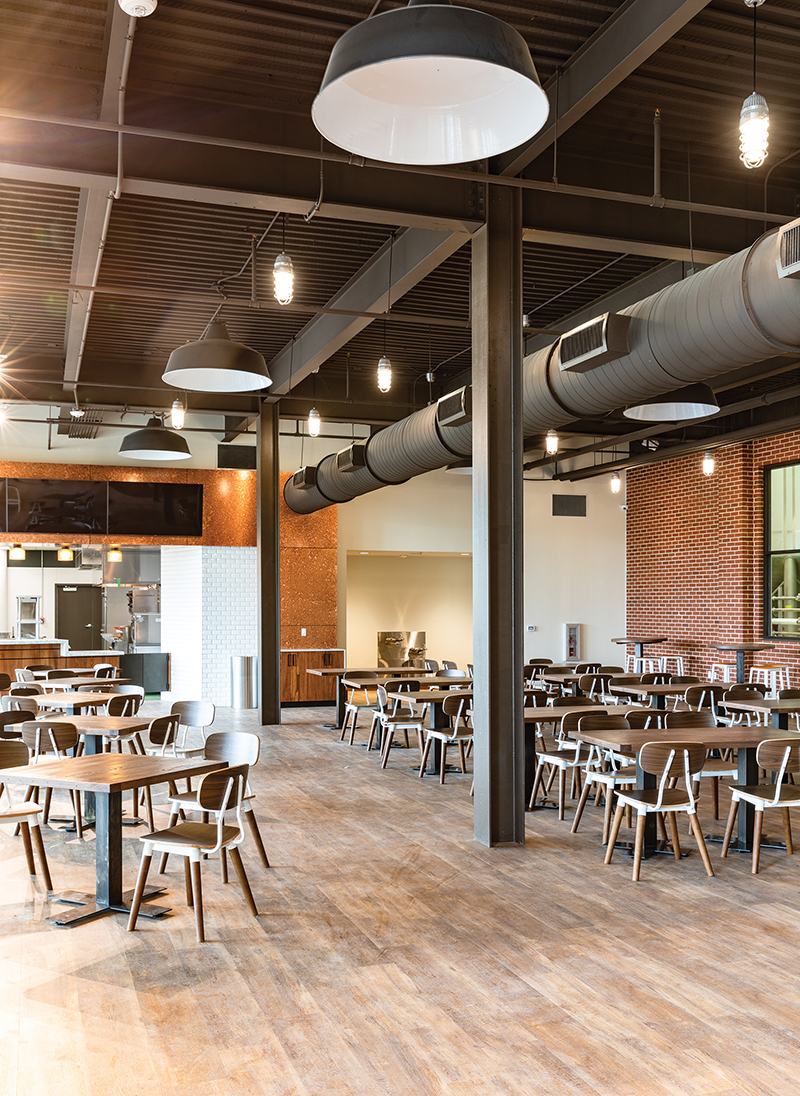 The 5,000-square-foot tasting and tap room is finished out with extensive wood flooring, woodwork bar surround, modern metalwork and modern wood and metal tables and chairs. 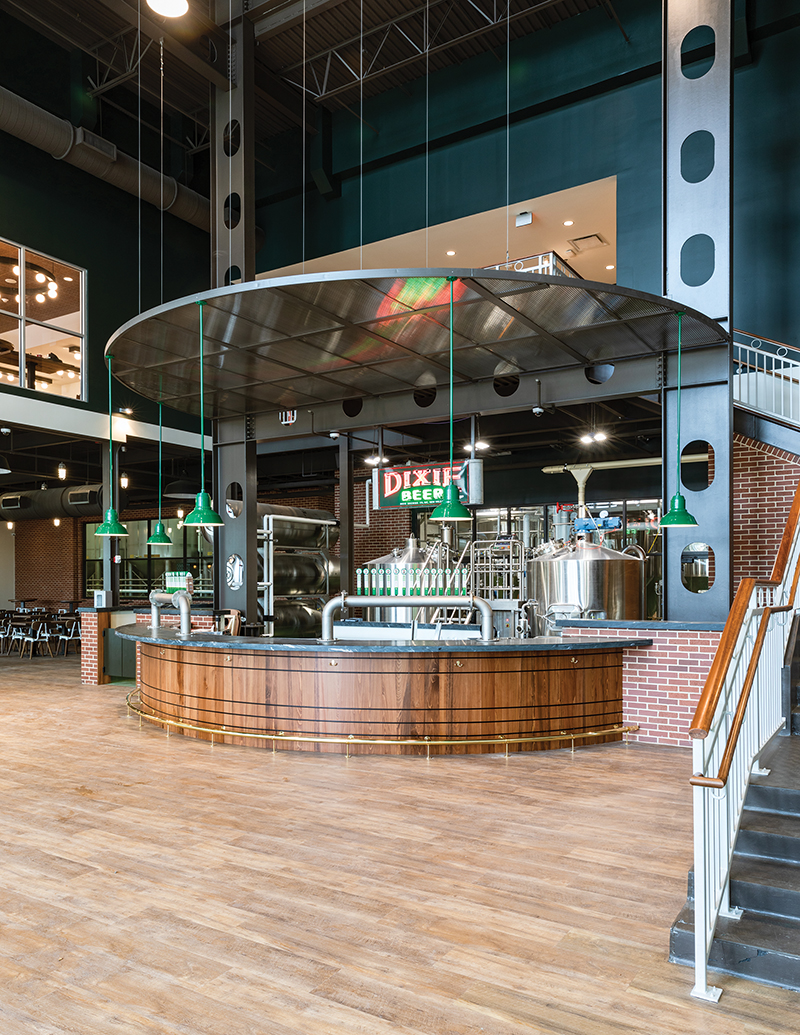 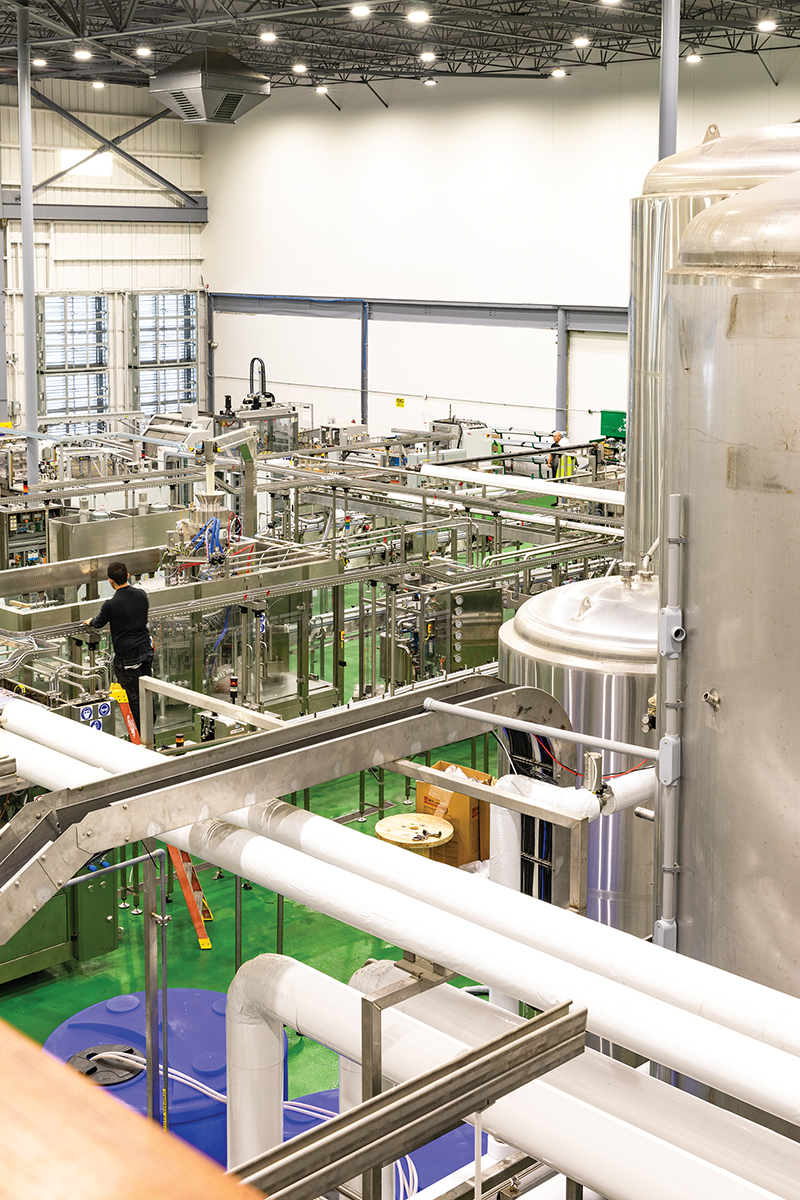 General Manager Jim Birch says two of the company’s biggest challenges are “becoming a must-see destination for both New Orleanians and tourists a bit outside the French Quarter,” and “educating our customers to expect Dixie Beer to be the freshest and highest quality beer products we have ever produced.”