The circa-1831 Hermann-Grima house offers a unique work environment that really takes you back.

Visiting a museum inside a house can be an educational experience and, depending on your aesthetic, at times an inspirational one as well. When it comes to workspaces, this kind of museum is, of course, a big change from a traditional office, and at the same time, not exactly like working from home. Katie Burlison, chief curator at the Hermann-Grima House in the French Quarter, spends her days making sure the circa-1831 manor house is in tip-top shape for visitors and the many events held on site throughout the year.

“I started as curator in January, so I’ve only been here a couple of months,” says Burlison. “I spend most of my time in the main house, since I’ve been refurnishing it after the recent HVAC install and renovations. My office is also in the main house, in a historic room with a beautiful marble fireplace.”

The house was designed by architect William Brand and is one of the earliest and best-preserved examples of American architecture in the French Quarter. It is a hybrid of Federal and French styles. Burlison says the Federal features include a symmetrical facade, an ornate doorway and a wide central hall.

“But Brand took the basic form of a Federal-style house and added several cabinets, balconies and galleries,” she says. “The balconies and galleries are more typical of French Louisiana style architecture and were an adaptation necessary because of the warm climate. The slave quarters were built in the characteristic New Orleans style.”

Renovations and restorations are an integral part of the life of any historic home, especially one that serves as a museum. In 1965, the Hermann-Grima House underwent a major restoration. The architects were Koch + Wilson. The National Society of the Colonial Dames in the State of Louisiana decorated and furnished the hall and parlor, and Burlison says by 1971, the entire complex was transformed into a museum. 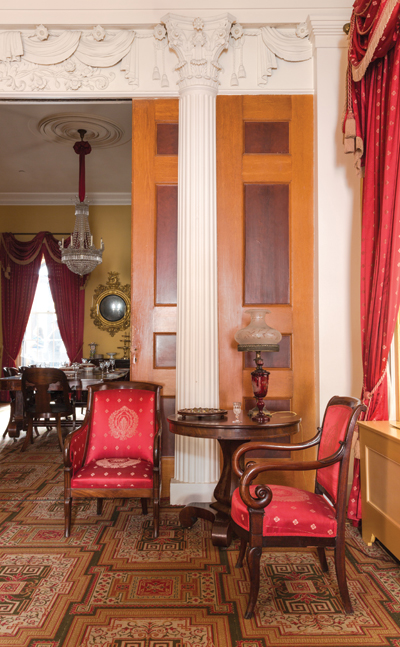 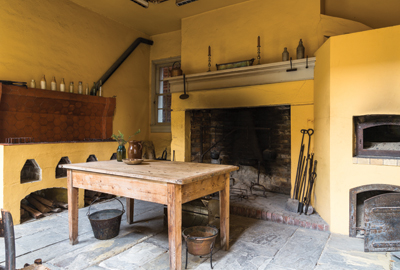 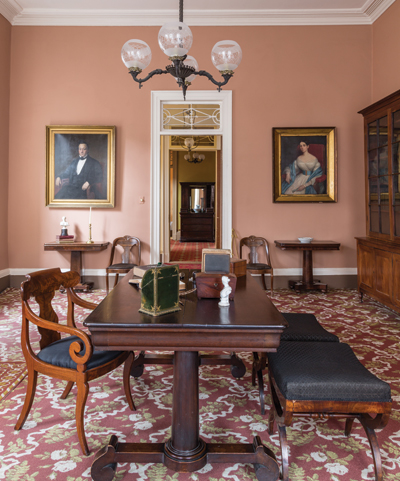 TOP RIGHT: The open hearth kitchen is located in one of the outbuildings off of the main courtyard. This area served as a primary workspace for enslaved members of the household in the 19th century. BOTTOM: The library is presided over by portraits of Felix Grima and Adelaide Montegut Grima.

The furnishings and artwork in the house are a mix of pieces that were owned by the Hermanns and the Grimas, who bought the house from the original owners, as well as items that reflect styles typical of the time period. Empire and early 19th-century Louisiana-made pieces are expertly blended with Rococo Revival.

“The most interesting thing about working in an historic house museum is the variety of the day-to-day work, and learning about life from the perspective of a different time,” says Burlison. “There are so many stories to tell about the families who lived here, the objects they lived with — many of which have stayed in or returned to the house today — and their place in the history of New Orleans and the French Quarter.”

Burlison says it’s also an asset to work out of the house because she is able to share ideas with docents, visitors and volunteer cooks about how to make the tours and the space more attractive and educational for the people who visit. That said, it’s also a bit of a mixed blessing.

“You also have to be flexible and willing to jump in and handle any task,” says Burlison. “Houses this age require a good bit of upkeep!”

Asked what her favorite features of the house are, Burlison cites the hearth kitchen outside and, in the interior, the carved wood frieze and Corinthian columns separating the parlor and dining room. But above everything, Burlison credits the home’s history to its allure.

“The history is so rich and encompasses such a variety of stories, not only related to art, decorative arts and architecture,” she says, “but to 19th- and 20th-century women’s history, the history of free people of color in New Orleans, culinary and garden history. We strive to connect them to contemporary experiences.” 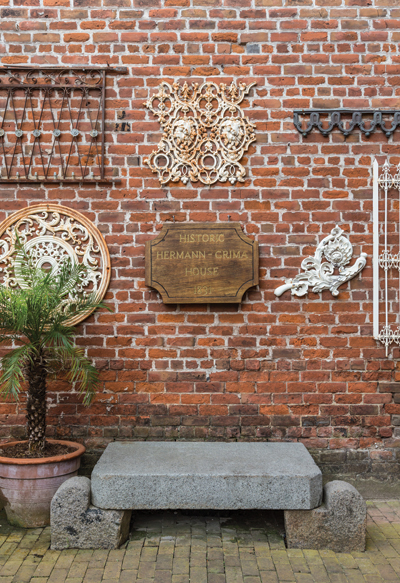 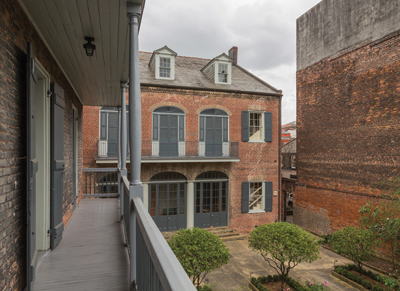 The library is presided over by portraits of Felix Grima and Adelaide Montegut Grima. The courtyard features a parterre garden and is home to various fruit trees. Antique iron elements and a vintage sign decorate a brick wall in the stable courtyard. A hybrid of Federal and French styles, the Hermann-Grima House is one of the earliest and best-preserved examples of American architecture in the French Quarter.

Standout feature: The working hearth kitchen outside and the carved wood frieze and Corinthian columns separating the parlor and dining room.

Mission of the museum: To continue the legacy of The Woman’s Exchange, established in 1881, by preserving and maintaining the Hermann-Grima and Gallier Historic Houses, and interpreting their contribution and place in New Orleans. An American Alliance of Museums-accredited institution and a leader in historic preservation for the French Quarter, the organization strives to offer educational, entertaining and interactive programming, while always maintaining the integrity of the founders.