Collection of Cufflinks On The Cheap

Henry Shane is a man who collects. He has a museum in Metairie with 160 vintage cars and over 10,000 other collectibles. And then there is his collection of cufflinks. You won’t find any near priceless cufflinks neatly stored in the cases he stashes in his big closet in the mansion he shares with Pat, his wife. The home is a replica of Nottoway on the River Road in White Castle near Baton Rouge, one of the most famous plantation homes ever built in the United States.

“I know it may sound strange when I say my cufflinks are worth less than $20 a pair,” says Henry, the chairman of Favrot & Shane Companies, a highly successful 46-year-old operation that has 9,500 apartments, shopping centers, self storage facilities, and office buildings. “When you are a collector, it’s the thrill of the find, rather than the cost, that energizes you.”

A stylish man of fashion, who wears fine clothes and loves to drive his one-of-a-kind vintage cars on a daily basis, he enjoys searching his collection of cufflinks each day for just the right set to wear.

“At first I only had a couple of pairs of store bought cufflinks and I like shirts with sleeves that require cufflinks,” he says. “I probably paid about $200 or more for each of the first couple of store bought pairs of cufflinks I acquired, and I was constantly misplacing or losing them somewhere in the process.” Soon, he says, he was reconsidering how much he wanted to spend on a pair of cufflinks.

“When I decided I didn’t want to pay $200 or more for cufflinks, I started looking at the less expensive department store offerings. I bought a couple of those types but found that they lacked character. They were rather plain and it seemed their only purpose was to hold the sleeves together. Then a good friend of mine showed me his collection of vintage cufflinks that he had acquired over the years. Since I have always been a collector, seeing my friend’s cufflinks was all I needed to make my entry into building my own collection.” 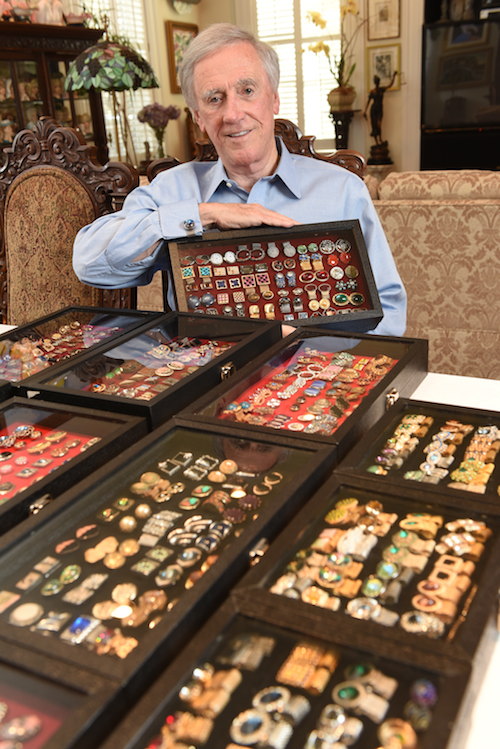 Today Henry’s collection numbers over 600 pairs. “I have bought cufflinks as cheap as $5, but nice ones usually cost a little more,” he says with the pride of a true collector. “I found one of my favorite $5 cufflinks at an antique fair connected to the Ponchatoula Strawberry Festival.” Then he adds with self-satisfaction: “I have hand-selected everything in my collection; I always try to buy unique pieces since I don’t want duplicates.”

In true collector fashion, he admits it’s the chase that is the most fun. “I don't go out actively seeking to buy vintage cufflinks but since Pat and I are collectors at heart, we will always stop at antique malls when we have free time or when we are on vacation. Both of us enjoy collecting. For Pat it is lady head vases, for me a short list would include singing bird cages, Murano glass, Capitomonte ceramic pieces, walking canes and antique furniture

He says he finds unique pleasure in collecting inexpensive cufflinks. “Most of the cufflinks that I buy were made in the late ’40s, ’50s and ’60s. They were inexpensive at the time and many have the tie clasps as part of a set. Simon Mexic, a friend of mine who owned the now-closed Mexic Brother Jewelry on Canal Street with his family, says he remembers the ’50s when the store would offer clearance sales of cufflinks for as low as $1 per pair.” 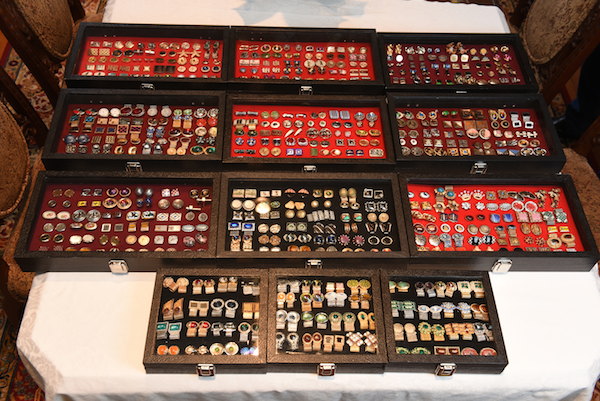 When asked to tell more about the cheap cufflinks he purchases, he explains: “None of them are constructed of precious metals and all of the stones are colored glass or inexpensive gem stones. On some of the sets, colored Bakelite or plastic was used in lieu of glass.”

A collector from an early age, Henry recalls how he collected comic books and marbles as a young boy. “Both collections are long gone. It’s too bad because they probably would be worth something today,” he says. Not to worry, he has 160 vintage cars and his own museum with over 10,000 collectibles, and there will always be another pair of inexpensive cufflinks waiting for him at the next antique mall or Louisiana festival he visits.

“I am just as happy buying a single pair of cufflinks as I would be if I bought a new vintage car,” he says with a smile.