Help Without The High

When it comes to alternative medicine, CBD, or cannabidiol, is the new “it” thing.

According to an August 2018 article in Forbes, which cites a report by Brightfield Group, sales of CBD oils, creams, tinctures and lotions are projected to surpass consumer interest in marijuana and skyrocket in the next three years.

“The data company estimates that hemp CBD sales have already hit $170 million in 2016 and a 55 percent compound annual growth rate over the next five years will cause the market to crack the billion-dollar mark,” it said, adding that sales are expected to reach $2.15 billion by 2021 if projections continue on trend.

CBD is one of more than 100 different chemical compounds, called cannabinoids, that comprise the cannabis plant, also known as marijuana. It is derived from industrial hemp and contains no THC, the main mind-altering ingredient in marijuana that makes consumers feel “high.”

What it does do, according to proponents, is help treat a wide variety of mental and physical symptoms, ranging from migraines and severe menstrual cramps to epilepsy and seizures.

Currently CBD is legal on paper in 47 states, along with Washington, D.C. and Puerto Rico — with only Idaho, Nebraska and South Dakota still holding out.

In early July, the first CBD Store — simply named Your CBD Store New Orleans — opened in the city at 3613 Magazine Street. Your CBD Store is a franchise that currently has 26 stores in nine states, including nine stores in Florida and five in Georgia. This is also the first in Louisiana.

Owner Crystal Nugent says she was inspired to open the store by her own experience with CBD. Nugent has long battled anxiety and struggled with finding a treatment to overcome it. Years of prescription medication provided little relief, and it wasn’t until a conversation with a friend about a new alternative treatment that the tide turned and a light bulb moment occurred.

“I first heard about [CBD] from a friend who was using [it] to treat Crohn’s disease,” she said. “She suggested I try it for anxiety.  I did, and within a few weeks, I was able to get off all of my prescription medication. We hear of a lot of new customers interested in CBD because of stories like that, word of mouth. We wanted to create a place to answer those questions, educate and provide a product.”

The 800-square-foot store has a purposefully relaxing, spa-like feel.  Customers and window shoppers will notice edited displays of tinctures, lotions, and even dog treats, arrayed not unlike a sophisticated salon.

“We wanted to create a welcoming store front to appeal to a wide variety of customers, especially an older group,” Nugent said. “We want people to come in and we teach them the ABCs of CBD. We show them their options and they then can make the choice.”

Nugent said customers are using her products most commonly for migraines, arthritis, epilepsy, anxiety and sleeplessness. Often, she adds, it’s for multiple ailments that are related.

“If you have anxiety, that might lead to sleeplessness because you are over thinking it,” she said. “If you have arthritis and chronic pain, you might also have sleeplessness or anxiety. One of the best unexpected benefits is helping our customers with sleep. They experience a more restful sleep, not zonked out like with Nyquil or other over-the-counter products.”

Nugent said that opening sales have been on the rise, with a customer base that stretches across multiple age groups.

“We are doing very well,” she said. “I see all kinds of customers, from people in their 20s through their 70s. They are all just coming in to find relief.”

While adults seek the benefits of CBD for themselves, Nugent added that many parents are also quietly exploring it for help with multiple physical and mental challenges with their children.

“We sell only to customers over the age of 18, but we often have parents come in for products to help their kids with learning disabilities or epilepsy,” she said. “We give them the information they are looking for, so they can make a decision that is right for them. Even younger people can benefit from better sleep. My son is at LSU, and he often takes it the day before a big exam so he can sleep and be more focused the next day.”

Nugent’s biggest sellers are the pain cream, which may help with joint pain and other inflammatory issues, specifically with arthritis, and the water-soluble tincture that users may take once or twice a day for overall heath, pain management, anxiety and problems sleeping.

A bottle of 300 mg solution sells for $60, which lasts for about one month, and a 600 mg solution for $90, comes in popular flavors such as piña colada, strawberry lemonade and mint. It may be taken in water, orange juice, tea or any beverage the user prefers.

The biggest stigma connected with CBD, she said, is not side effects, price point or proposed benefits, but rather its connection to cannabis, and the push by pharmaceutical companies to keep customers coming back to products they already use.

“Our goal is to educate,” she said. “We have actually had amazing interactions with doctors here locally, many of whom recommend that their patients explore CBD as an option, especially with pain management. We could not have been more pleased with the reception we’ve had from customers and many local physicians.”

As New Orleans consumers begin to explore new pain management and the health benefits of CBD, and as the use and prescription of medical marijuana begins to expand within the state, Nugent said she looks forward to expanding her store, with two new locations set to open in Metairie, both on Veterans Boulevard, later this month. 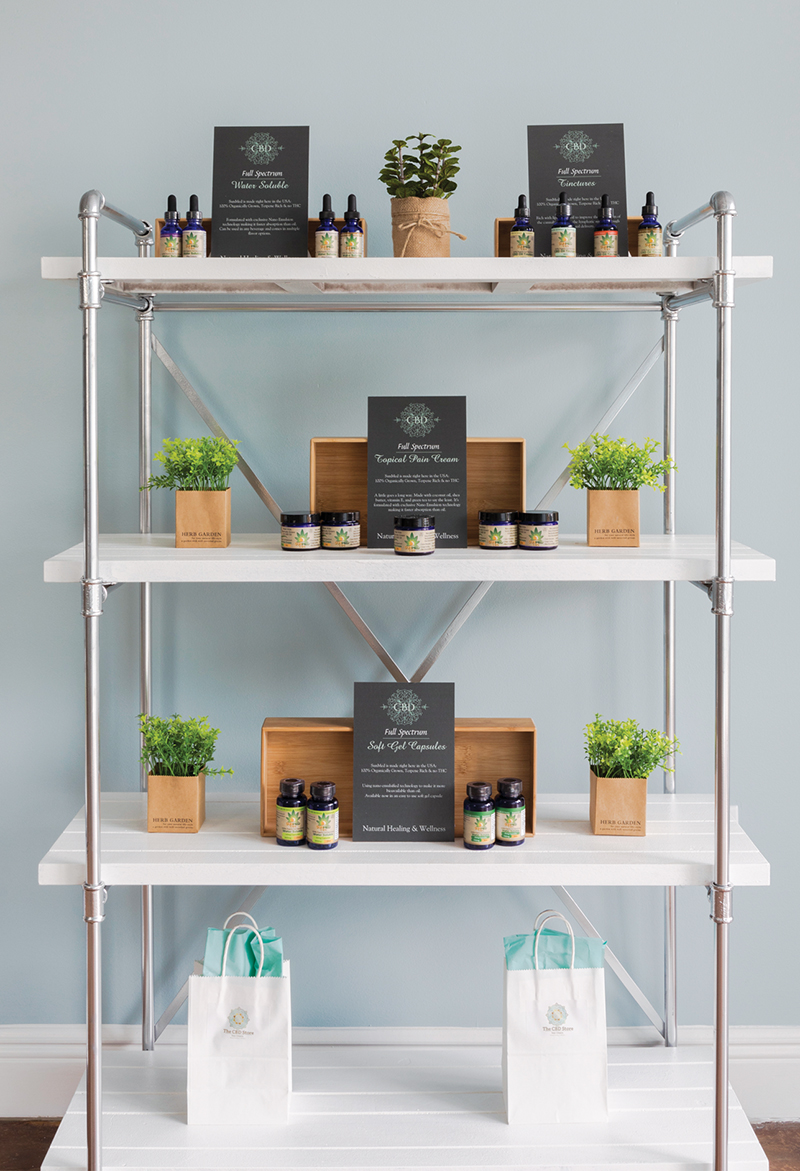 The Magazine Street store has a bright, airy feel. “We wanted to create a welcoming storefront to appeal to a wide variety of customers, especially an older group,” Nugent said.

The ABC’s of CBD

Potential Cautions
Pregnant and breastfeeding mothers should avoid, Some drug interactions could occur, so it is recommended to consult your physician 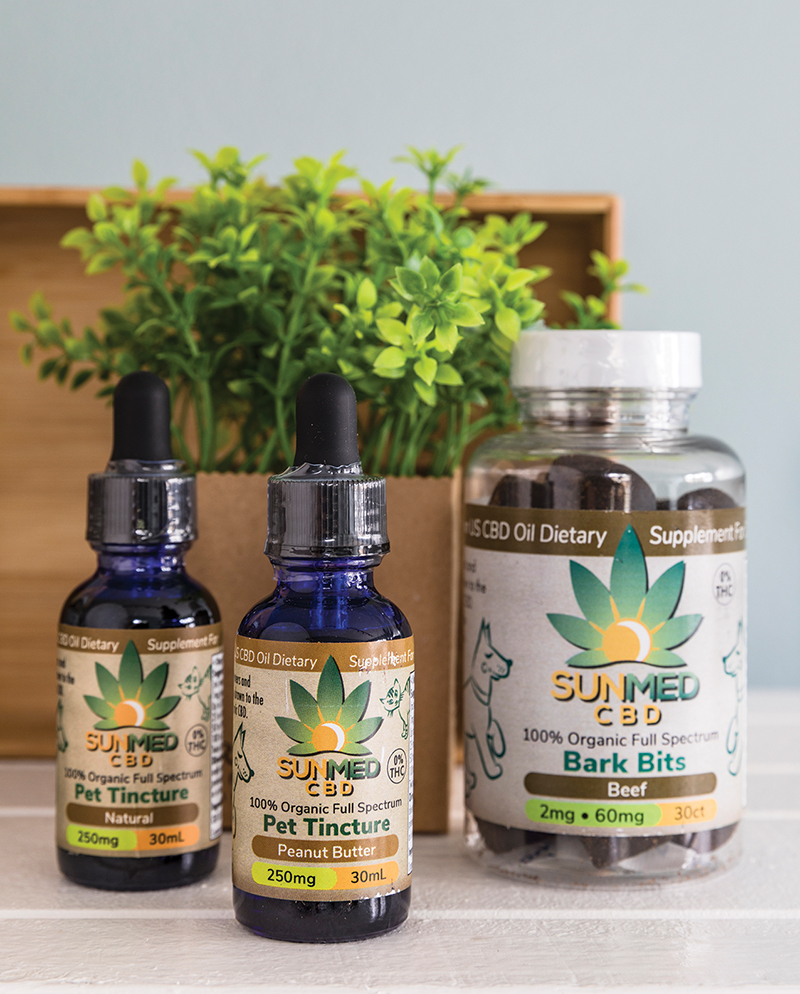 In addition to treatments for people, CBD oil may also be beneficial to pets, specifically dogs. Products, from tinctures and oils to dog treats, are available to help with issues such as separation anxiety, pain relief, joint inflammation and fearfulness.

Facts about the Growing CBD Market

Demand for CBD products in the U.S. is highest in states where marijuana is difficult to buy — specifically the Midwest.

The No. 1 brand of CBD products is “Charlotte’s Web,” created by a company called CW Hemp. It gained attention through a CNN segment featuring Sanjay Gupta.

In June of this year, the U.S. Food & Drug Administration approved a drug to treat epilepsy, Epidiolex, produced from a purified form of CBD. The new product was approved to treat seizures associated with two rare, severe forms of epilepsy in patients two years of age and older, according to an FDA press release. The effects cut the number of seizures in most patients by 40 percent. The FDA won’t be able to market the drug, however, until the DEA reclassifies CBD.