Healing With Every Step

Who doesn’t love throwing on a pair of flip-flops on a warm day? Just slipping on this most casual form of footwear instantly conjures thoughts of vacation, relaxation and good times. They’re freeing. They’re cool. They’re a summertime must-have.

They’re also horrible for your feet.

The total lack of support with flip-flops can lead to a host of issues, including tendinitis, over-pronation, stress fractures and even stubbed toes. In 2010, the National Health Service in Britain estimated that flip-flop injuries and issues from long term use cost the nation $40 million a year

For those with existing foot problems, like flat feet or high arches, flip-flops are particularly a bad idea. This includes those with plantar fasciitis. The most common cause of heel pain, this condition is estimated to strike 10 percent of the population during their lifetime, amounting to about 2 million cases per year.

“I’ve had patients come to me whose doctor told them they can never wear flip-flops again,” says Dr. Meredith Warner, an orthopedic surgeon who has been serving patients in Baton Rouge at her private practice, Warner Orthopedics & Wellness, since April 2013. “Eventually I thought to myself, ‘What if I made the problem the treatment?’”

Dr. Warner has done just that with The Healing Sole, a patent pending flip-flop that “allows the mechanics of the foot to heal itself.”

The Healing Sole flip-flops hit the market in October of 2015, priced at $125 a pair (with a 30-day money back guarantee). They are available online, at other Baton Rouge-area physical therapy clinics and doctors offices — including Dr. Warner’s practice — along with specialty running stores. In all, the shoes are available in close to 20 locations, as well as online at TheHealingSole.com. In the first year, Warner sold nearly 5,000 units.

While the shoes have been shipped to New Orleans homes since The Healing Sole’s launch, in late 2016 they finally became available at a brick and mortar location — Varsity Sports on Magazine Street.

“I’m surprised at how many people come to a running store looking for relief,” says Jenni Peters, owner of Varsity Sports. “These shoes seem to be working for a lot of people.”

To understand how the flip-flops work, you have to first understand a bit about plantar fasciitis. The plantar fascia is the name of the band of tissue that connects the heel to the front of the foot, supporting the arch. When that band becomes irritated it causes foot pain that can lead to someone changing the way they walk. That, in turn, can lead to knee, hip and back pain. 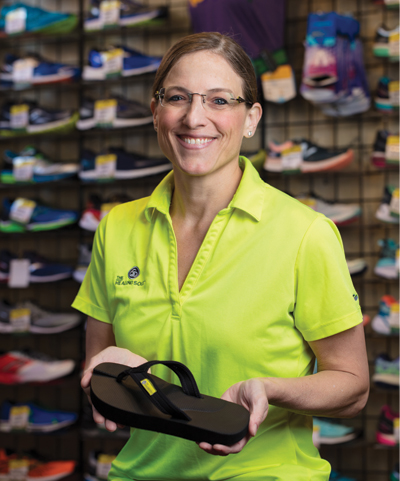 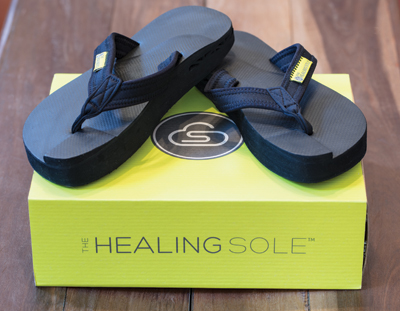 LEFT: After hearing many of her patients complain about not being allowed to wear flip-flops due to foot problems, Dr. Meredith Warner says she thought to herself, “What if I made the problem the treatment?” RIGHT: Available at close to 20 locations, as well as online, The Healing Sole sold nearly 5,000 units in its first year in business.

The key to providing relief from plantar fasciitis is to reduce the stress on this band. The Healing Sole shoe does this in a few notable ways. First, the big toe portion of the shoe is slightly raised. This helps strengthen the arch of the foot as a person walks. Second, the shoe has a raised arch, which supports and stabilizes the arch of the foot. Third, the shoe has a rocker bottom, a slight curve in the bottom of the shoe that reduces stress when walking. Finally, the heel of the shoe compresses when you walk, reducing pressure on your heel where the pain of plantar fasciitis is commonly most pronounced.

Dr. Warner says the process of turning the common flip-flop into a vehicle for healing was far from easy. “It took about six years to go from my first drawings to a finished product,” she says. “I spent about a year and a half finding a manufacturer. The logistics aren’t easy — the shoe is made from six different molds that are put together by hand.

Before putting the shoe on the market, Dr. Warner had to know it worked. She created her own clinical study, comprised of 22 patients who suffered from plantar fasciitis. “A vast majority of those had tried and failed other treatments,” she says. “We had them wear the shoes for a few hours every day for a few months.”

At the end of the study, the average pain score for participants was cut more than half (6.14 to 3.05), and 94 percent said they would recommend the shoes to a friend.

“Typically, you’d start with home stretches, and if that doesn’t work, you’d go to steroid injections, but those can have terrible side effects,” she says. “Finally, there’s surgery, where you go in and clip the plantar fascia, but that destabilizes the whole foot. Essentially, with the flip-flop I thought about how I treat the condition and put all of those ideas into one thing.”

Dr. Warner says the entire process of creating the shoes was, “the most difficult thing she’s ever done,” but says a particularly challenging part was finding a manufacturer.

“I finally found a facility in Vietnam and I’ve actually been there and visited it,” she says. “They’ve been great, but the one issue we have is lag time. To make a change in an order takes about three months.”

Warner says she’d love to move the manufacturing to the U.S. but hasn’t found the right fit yet. “It’s a lot more expensive to manufacture here, but when you factor in the lag time and shipping costs, it could be conceivable.”

With the success of the flip-flops, Warner says customers have now been requesting a closed toed version of The Healing Sole.

“They want to have something they can wear to work,” she says. “That’s my No. 1 request. I’ve gone through 13 prototypes so far. Nothing yet, but I’m working on it.”