HauteWork fashions provide form and function for women in the workplace

When petroleum engineer Jaime Glas first put on the bulky, made-for-men overalls at her first internship at Chevron in Bakersfield, California, in 2010, she instantly knew there had to be a better option, and that she was going to have to create it. It wasn’t until after graduating from Louisiana State University with degrees in petroleum engineering and international trade and finance — when her work again required the ill-fitting attire — that she really started moving forward on her idea.

Since launching HauteWork in January of 2018, the New Orleans resident has been providing a wide array of styles, colors and sizes for women looking for flame-resistant, safety uniforms that fit their bodies and fashion preferences.

“We have sold to women from over 100 companies now,” said Glas. “Primarily these companies are in the oil and gas industry, but we have sold to many electricians and welders as well. We even outfitted the welder babe on Mythbusters.”

In just over a year, HauteWork’s sales have extended across the United States and into Canada, with overseas companies exploring options, as well.

“Sales are primarily in the Gulf Coast region, but really all over,” she said. “We had our first sale in Nebraska this morning.”

While women currently make up 29 percent of the STEM workplace nationally, their numbers continue to grow, with the lack of practical resources for women being felt in research fields and on the job. This past March, NASA was forced to cancel its first all-women space walk for a lack of properly fitting spacesuits (which are only available in medium, large and extra-large sizes).

Feedback from customers, while positive, took a while to get going, said Glas.

“In the beginning, some women were skeptical because they didn’t want to stand out. But I think the recent women’s movement has helped. It’s ok to be feminine. Women are less afraid to be themselves in the workplace,” she said. “They don’t mind standing out.”

HauteWork sales have been 100 percent word-of-mouth, with some customers returning to try new styles and colors, sold on the fit, comfort and flexibility of options.

“They love the fit. When I started selling the first year, it was all individual women who had saved up to buy the suits themselves,” Glas said.

The company currently offers four jumpsuits, as well as jogger pants, two T-shirt styles and overalls, plus shoes and safety glasses, with more designs in the works.

Prices range from $150 to $200 for suits and overalls, $20 for sunglasses, and $125 for safety shoes. According to Glas, her best-selling colors are gray and blue — dictated primarily by company requirements — and her top-selling suit remains the Flex Suit.

“We have three more garments coming out this summer for a specialized line,” Glas said. “We also have five or so more styles that have been developed that we will be rolling out later this year. We started marketing the jumpsuit first, because proper women’s fitting coveralls was the most neglected in the market. We will now be focusing more on separates through the end of 2019.”

Response to the HauteWork accessories has been especially well received by both women and men in the industry, according to Glas.

“I’m sure the fashion aspect has something to do with it, but most of our customers like [our work shoes] because of how comfortable they are. I used to wear steel-toe shoes often, and it’s tough to find a comfy pair. These are also very light, so you can travel with them easily,” she said. “We’ve actually sold quite a few of our safety glasses to men. They offer a little more style.”

Glas said the idea and motivation behind HauteWork was somewhere at the crux of necessity and passion.

“I have always loved fashion and even took some fashion and sewing courses in college, along with math and science, before I decided to pursue a career in engineering.”

While she struggled for years to combine her desire for functional clothing that fit her smaller frame with materials suited for a multitude of high-performance workplaces, the idea was a no-brainer for her and many other women.

Glas worked for years to bring her big idea to life.

“I really started working diligently on the design and prototyping process in 2014. The initial stages were more around gathering survey information from every woman I could find in the industry, and researching the codes and regulations that govern the clothing. Then I went through several pattern makers before I had samples ready for the first collection,” she said.

HauteWork’s line of specialty clothing and uniforms is a result of Glas’ tireless efforts to find the right fit for the construction of each garment.

“We now use several freelance pattern makers, but our original line was led by a company called Omega Apparel out of Nashville, Tennessee,” she said. “Omega had a reputation for creating garments for the military, some flame-resistant, so I thought it was a perfect fit. Our permanent production facility is now [in] Alabama. We work with a factory that specializes in small batch, made-to-order production.”

While response from female clientele continues to be overwhelmingly positive, it’s the growing response from male co-workers and clients that has surprised Glas.

“Feedback from male coworkers has all been positive,” she said. “They ask sometimes, ‘Why can’t someone make my suits look good, too?’ Many of the traditional work clothes, like jeans and button downs, have a kind of western look. Some men don’t like that and are looking for something a little more contemporary. I am working [as a consultant] with a company out of Cleveland that has experience with men’s clothes.”

“Those old bulky suits were unsafe for the workplace as well as not fashionable,” she said. “I love fashion. I learned that it’s ok to be yourself and stand out, as long as you conduct yourself professionally. 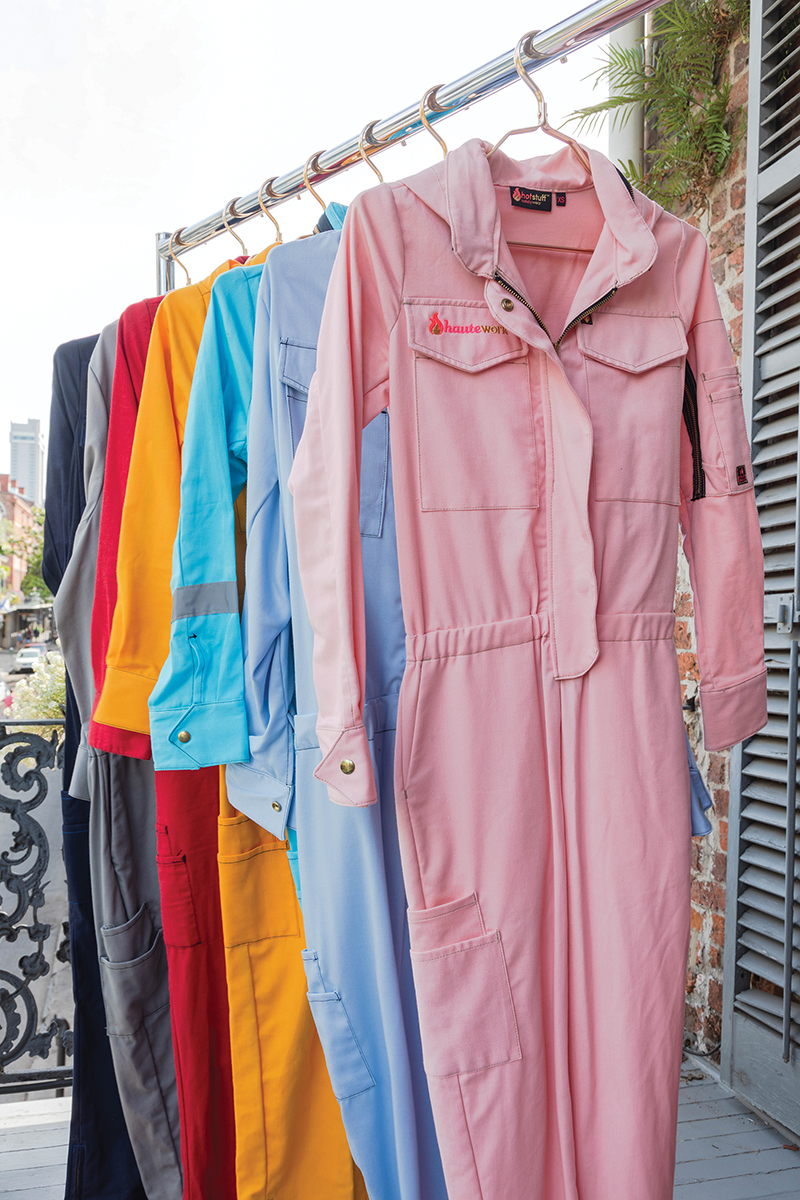 Women currently make up 29 percent of the science and engineering workforce nationwide.

Source: According to a report from the National Girls Collaborative Project and the National Science Foundation’s 2016 Science and Engineering Indicators 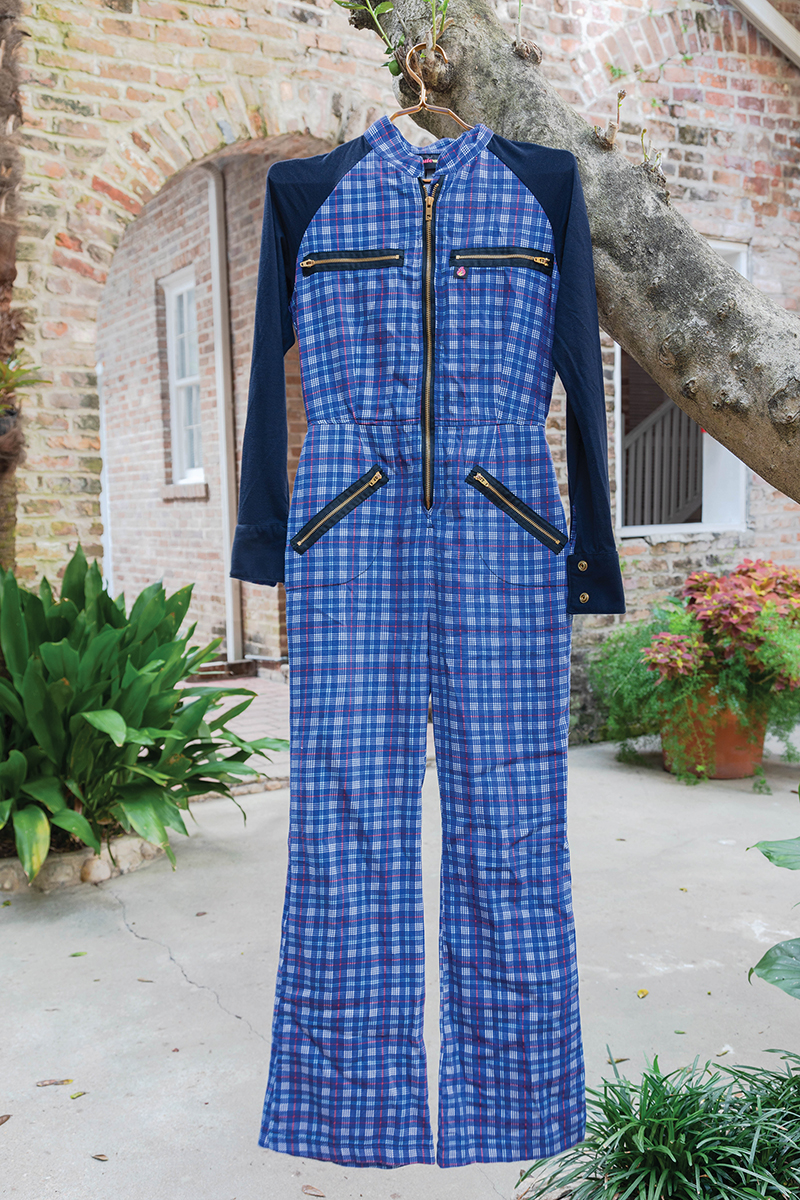 HauteWork’s most popular style is the “Flex” suit, which is available in nine colors and two limited editions (a commemorative college option and a striped version). The collection also includes accessories, such as stylish safety shoes and glasses, T-shirts and caps.