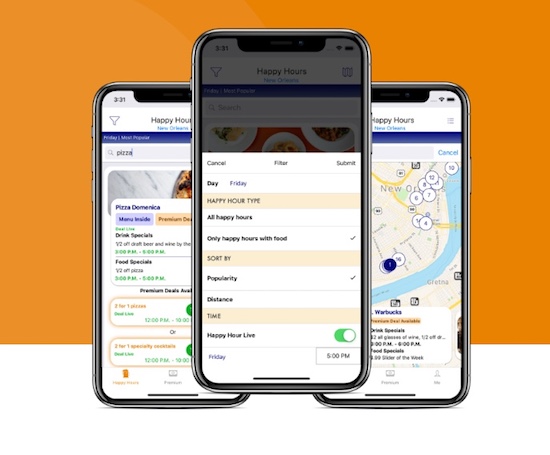 Eschewing the corporate corner offices and Brooks Brothers suits, an entrepreneurial triumvirate strategize their next moves en plein air beneath a blue pop-up tent in an Uptown courtyard. Cary Greenwood, Noah Stambovsky and Sam Stein are the team behind Drinker’s Edition, an app that connects users to more than 400 happy hours happening at local bars and restaurants.

“We’re pretty laid back and do most of our work on our cell phones and laptops in our backyard office,” says Stein. “It’s worked pretty well so far.”

The trio have a range of degrees from economics to philosophy and met during their freshman year at Tulane in 2012.

“Cary had a hit list that included his favorite happy hours and the ones he wanted to visit before we graduated,” says Stein. “So he created a spreadsheet. We soon realized that it was a pretty useful resource.”

Greenwood decided to build a website, the now defunct NOLA on the Rocks.

“It got decent traffic, so we started thinking of different ways to monetize it,” Stein says. “That’s when we realized that it should be an app. We tried having someone build it for us, but Cary wasn’t happy with it.  So he said, ‘I’m going to teach myself to do this.’ And he did. He figured he could just do it with copying and pasting and doing some Google searches.”

Greenwood is clearly the app’s “tech guy” and developer. Stein says his friend has always had an entrepreneurial spirit.

“He sold CDs when he was in middle school, and once he turned our living room into a mattress showroom when he came up with the idea to sell and buy mattresses at the end of the school year. We made $1,000 in a week.”

According to Stein, the app has 10,000 downloads per month and 3,000 active users. It connects users to hundreds of deals on food and drink around New Orleans and Baton Rouge. Users can search by location, most popular spots, day of the week and live deals.

The team is extremely proud of their data and had a unique way of collecting it.

“We would sit in the back yard and call bars and restaurants to find out about their happy hours,” Stein says. “And for every 10 restaurants you confirmed you drank a gin and tonic.”

The app is free, but for $5 per month you can subscribe to Drinker’s Edition Premium and get exclusive access to anytime deals and flash deals with partner restaurants.

You can also get deals for free by writing positive reviews on a bar’s Facebook page to unlock them, which is also a way for venues to get good write-ups.

The team is slowly expanding the app’s reach and scope. They recently added a wine club option that allows users to get deeply discounted or free bottles of wine at partner restaurants.

This option just went live in Baton Rouge and is doing very well. The team is already starting on more expansion with the hope of having their app everywhere in the near future.

For right now, they still get stoked when they see people scrolling their app or overhear someone saying, ‘This is my favorite app ever.”