The Lion King to debut at The Saenger Theater

To kick off its 20th year as a top grossing musical, The Lion King, will come to New Orleans at the Saenger Theater for the first time, as a part of the East Jefferson Broadway in New Orleans 2016-2017 season. From Jan. 4 to Jan. 29, audiences will be able to join the 17 million who have attended the North American touring production of this beloved show.

Since The Lion King premiered on Broadway in 1997, 23 productions have been seen by over 85 million people, worldwide. It has been translated into eight different languages, performed in 20 countries and has won six Tony Awards. But after 20 years, The Lion King is adding one more notch in its list of accomplishments, performing right here, on the stage of the historic Saenger Theater.

Originally built in 1927, the theater suffered severe damage during Hurricane Katrina. It took $52 million and roughly six and a half years to repair, but the Saenger has been up and running in its full glory since Jan. 2013.  East Jefferson Broadway in New Orleans has been bringing world class shows to New Orleans audiences since 2011 and to the Saenger since it’s reopening in 2013.

The Lion King is known for its extravagant costumes and puppets, colorful sets and painfully catchy tunes.  There are 134 people on tour that work together on the show, including 49 cast members, 19 wardrobe staff, 18 musicians, 11 carpenters, 10 electricians, five hair and makeup artists and four props people, who come together every day to transform stages across the country into the savannas of Africa.

Tickets for the show start at $35 or can be added as an extra show with the purchase of a 2016 – 2017 season ticket to Broadway in New Orleans. The Lion King will play every day of the week except Monday, from Jan. 4 – Jan. 29. More information and a full schedule can be found at the Saenger’s website and tickets can be purchased from Ticketmaster. 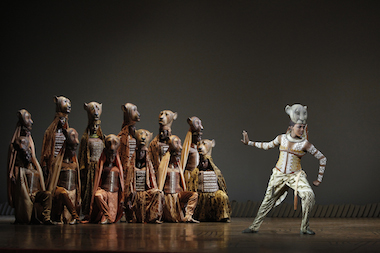 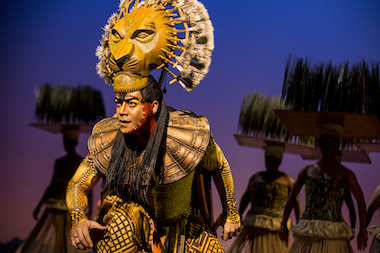