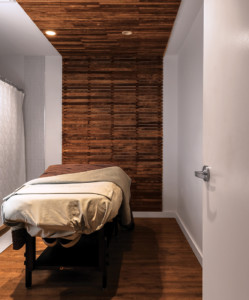 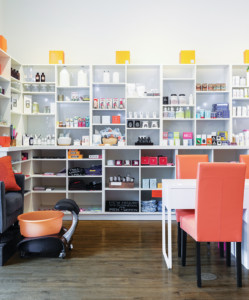 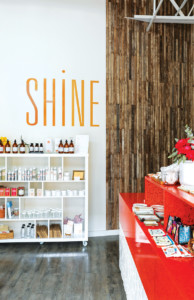 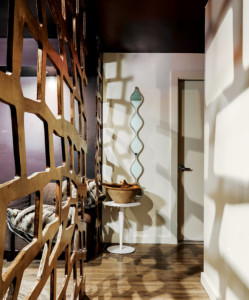 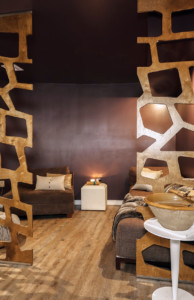 Spas often seem like society’s last bastions of serenity — leave your cell phone at the door. Quiet lounges and treatment rooms, luxe services administered by experienced professionals and décor designed to induce relaxation are a surefire combination. The latter is, of course, key when it comes to the most successful spas, which is why Cindy Cocke and Sandy Blum turned to StudioWTA for the design of Shine Spa.

The duo behind Spa Aria, which has been operating inside the Hotel Monteleone for 13 years, opened Shine Spa in 2014 as the second step in their plan to eventually operate four spas, each one representing one of the four elements of nature: earth, water, air and fire. Spa Aria represents air and Shine spa, fire, which meant the designers already had a built-in concept with which to work.

“Shine was a name we both wrote down,” says Cocke, referring to when the co-owners were brainstorming about the concept of the spa. “We think of orange and colorful, funky, fun and bright.”

The 1,700-square-foot space embodies Cocke and Blum’s initial description. Visitors enter through the retail area, which is awash in white with orange and wood accents to bring in the fire element. Herbal and botanical skincare products, including a Shine brand, are displayed throughout the room. Customers can also use the custom blending bar for personalized products.

The StudioWTA team used a white CNC decorative routed panel and orange 3form Fizz panel for the cash wrap. The wall that leads to the inner area of the spa and treatment rooms is covered in a swath of locally-sourced reclaimed plaster lath, bringing warmth to the light-filled room and prefacing the inviting space down the short hallway.

The mood of the space transforms as you enter into the spa area. Low light and a lowered ceiling evoke coziness and calm, allowing customers to transition from the busy-ness of their day.

The lounge is to the left of the hallway and is separated by a custom routed birch screen, meant to stimulate meditation and reflection.

Adding to the peaceful ambiance is a variety of soothing herbal scents, which waft through the lounge, walkways and rooms.

Each of the four treatment rooms — which include a room for facials, a body treatment room and the couple’s massage room — features the reclaimed wood lath to continue the fire element theme. Rectangular white sinks in the rooms have a residential characteristic, providing a homey touch.

“We are a small business and like to keep it intimate and personal,” says Cocke. “We connect with our guests and they all know who we are.”