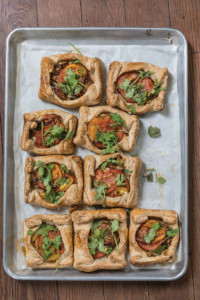 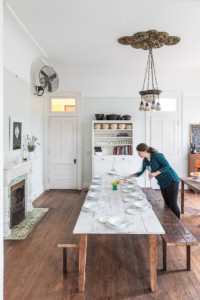 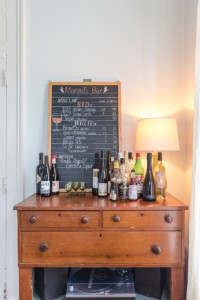 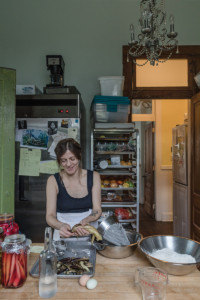 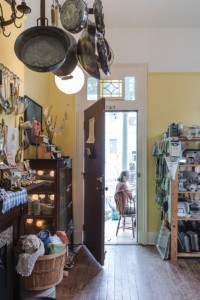 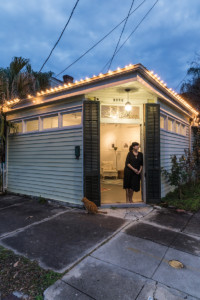 Tucked away on a quiet residential street, three blocks off of St. Charles Avenue, a charming, yellow, circa-1898 Victorian house with white trim bustles with activity.

Breads and pastries are being expertly crafted from scratch. The door on the left side of the house is unlocked; revealing kitchenware, bakeware and gourmet goods being tweaked into artful arrangements. Meanwhile, Chef Melissa Martin prepares for the evening’s guests.

While it may sound like a scene straight out of a Kate Chopin short story, it’s actually the story of a modern-day bakery, retail space and restaurant. In 2016, Chef Martin moved her popular Cajun brunch and supper club — The Mosquito Supper Club — from the French Quarter to a house in Uptown New Orleans. It was a last-minute save when the company unexpectedly lost its original space. With bookings scheduled through the end of the year, Martin had to act fast, so she took a friend up on a long-ago offer. It was to lease the approximately 1,700-square-foot, already commercially zoned house the friend owned at 3824 Dryades St. After operating her farm-to-table restaurant in the space alone for a year, Martin invited Christina Balzebre, owner of Levee Baking Co., and Betsy Lindell, owner of Seasoned — a secondhand retail cookware shop — to begin operating their businesses out of the house. The result is a female-centric culinary collective that feels at once contemporary and like a throwback to an earlier era.

“It’s so hard to run small businesses in this city and you don’t always want investors,” says Martin. “So many people who are so talented end up leaving their craft.”

This collective mindset has resulted in a transformation of the bright, breezy Victorian house from a pleasant residential space for the owner’s mother into a bakery, retail shop and two-room restaurant with a petite, yet powerful commercial kitchen, outdoor area for cocktails, mingling or events and a soon-to-launch weather-permitting al fresco oyster bar, as well as — most recently — studio space in an adjacent, onsite building for photographer Sara Essex Bradley. (Disclosure, Bradley is a contract photographer for Biz New Orleans and regularly contributes to this feature). The space also serves as a catalyst for creativity and collaboration.

“I knew Christina was extremely talented and I wanted to draw from her energy and learn from her,” says Martin. “We are planning to start a brunch together.”

The first “Brunch at the Club” was on Jan. 21. Martin is also planning some special surprises during Carnival Season. The Club will be open for breakfast and lunch Feb. 2 through Feb. 11. It will be a Mosquito and Levee collaboration.

She says Seasoned was a natural fit for use of the other available rooms, though she jokes it is tempting to shop the inventory daily. Lindell’s former location was on Broad Street in Mid-City, with a barber shop upstairs and a Brazilian Capoeira studio next store. She says she was glad to move to a space close to other culinary businesses.

“What I didn’t anticipate with the move was how much exchange there would be between the businesses,” says Lindell. “I share a physical space with Melissa and Christina but they also occupy my mind. I am striving to make my business better alongside them. I see their hopes for the space turn into realities. They are both doers in the truest sense of the word.”

Seasoned is open 11 a.m. to 6 p.m. Monday, Tuesday, Thursday, Friday and Sunday, closed on Wednesday, and open 10 a.m. to 6 p.m. on Saturday. Through the week, Balzebre bakes for distribution at Congregation Coffee, Mammoth Espresso and Cherry Espresso, and frequents various farmers markets, but on Saturdays the Club is converted into a popup where anyone can buy pastries, breads and coffee, and either eat in, take it to the back porch or yard, or carry out. You can also nibble and sip while shopping at Seasoned for wooden spoons, jam, a cast iron Dutch oven or, if Levee’s goods inspire you, a banneton basket to test your bread baking skills at home.

“What’s really great is to see the space change,” says Martin. “It’s a shape shifter. I leave here Friday night and come in on Saturday and it’s a totally different space. It’s so homey and smells like baked goods. It’s exciting to see it used in a different way.”

On Saturdays, the farm tables — built by Matthew Holdren — are topped with flowers in pitchers and glass tumblers from Seasoned, then finished with paper towel holders. A black and white sign with “Bakery” in bold lettering is placed in the front room. Morning light floods the space and there is always a line out the door.

When Bradley’s latest book, “Dog Décor: Canines Living Large,” was released in July 2017, the space transformed yet again into the perfect spot for a book launch party and signing. In the yard, guests mingled by the bar and enjoyed freshly shucked oysters at the oyster bar while meandering in and out of Bradley’s studio or ambling inside the main house for the signing.

The concept of a restaurant only being open Thursday, Friday and Saturday seems a little foreign to many, and Martin says one of the biggest challenges is quelling the idea that it isn’t a permanent restaurant or that she lives in the house. The “Club” does bear the decorative elements of a home, with rustic, residential-style hutches, tables and accessories, but the masterfully prepared, gourmet Cajun food and ever-evolving changes — such as the formerly BYOB-only establishment acquiring a liquor license (patrons can still to bring their own, for a corkage fee) — are helping Martin correct misperceptions.

“My ‘show’ is about Cajun life,” says Martin. “Dispelling myths of what it was like growing up in Terrebonne Parish and the coastal region. I make it very clear that it’s my version of Cajun. There are things on my Cajun table that would be on another Cajun table. It’s not really a job, it’s a lifestyle.”

Mosquito Supper Club or “The Club”

Biggest Challenge: “[The] biggest challenge is keeping up with all the details that make this old home so magnificent,” says Chef Melissa Martin. “We put our commercial kitchen in the original kitchen, [where] I used to drink coffee with my friend Sarah. It was the room that needed the most work, so it seemed appropriate to use it. We were sad that we had to build a wall across one of the [kitchen] windows in order to pass code. We also installed a 10K handicap lift to pass code. We want to be handicap accessible, that is so important to us, but the options for commercial accessibility are expensive. It was more expensive than our hood and ansul system.”

Standout Feature: The plaster walls and arches of the ceiling indicative of circa-1898 Victorian architecture.

More than 300 Volunteers to Provide MLK Day of Service