Palmisano’s new headquarters pays homage to the past while looking to the future. 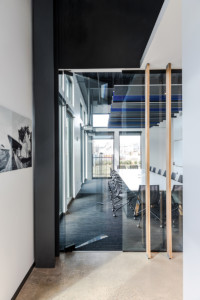 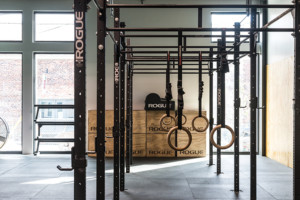 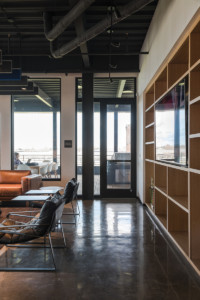 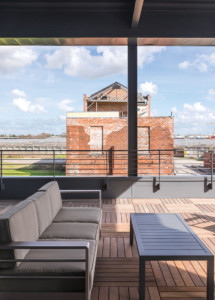 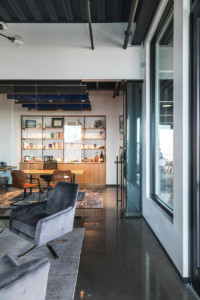 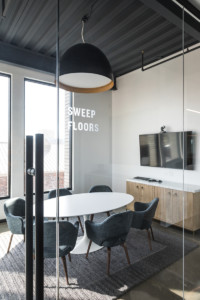 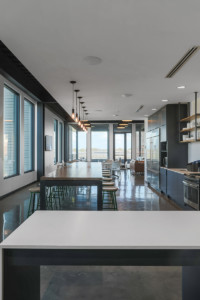 An expansive covered deck overlooking the river — with a sizeable grill and ping-pong table — is visible from the meeting table in Wes Palmisano’s new office. Palmisano is the president and CEO of Palmisano construction firm, but apart from using it for meetings, he says he rarely spends time in his executive space, which has a sleek lounge area situated nearby. He opts instead to post up at a desk in a shared “pod” closer to the open office space where the company’s project teams work.

Palmisano moved into its new, approximately 30,000-square-foot space at 1730 Tchoupitoulas Street in February. The three-story, state-of-the art building was designed by Eskew+Dumez+Ripple architectural firm and was created for collaboration and growth.

“Our business plan is to double the size of the organization and the building was built with that in mind,” says Palmisano, whose grandfather, Warren J. Palmisano Sr., started W.J. Palmisano Contractors in 1950 as a residential construction company. In 2013, the junior Palmisano transitioned the company to commercial work. Upon moving into its former, 15,000-square-foot space, Palmisano had 20 people in the office.

“When we moved out, we had 100 people,” says Palmisano. “We learned a lesson from the last office. We have the structure, foundation and roof built to where we can expand up two floors.”

Growth was an important element of the design, but Palmisano says he had another, even greater priority than being able to expand in place.

“The No. 1 driver of creating this facility was the culture,” says Palmisano. “Company culture has been at the forefront of our design. The space takes on the personality of the company.”

That concept is quite literally written on the wall upon entering the building. Rather than a logo in the lobby, Palmisano’s manifesto is etched front and center into a large-scale wood design element behind the reception desk.

“Instead of a vision and a mission statement, we have a manifesto,” says Palmisano. “Honorability; a fun and constructive work environment; a place for people to build a career; innovating for our industry — we want to be able to attract top talent. The tech companies do it, so we do it.”

Tech companies entice desirable candidates into their ranks via amenities and Palmisano’s new facility has all of the bells and whistles. A yoga room and Crossfit gym with weekly, instructor-lead classes; local craft beer from nearby Urban South Brewery and cold brew coffee from French Truck are on tap in the café; and continuous professional development through the company’s “Palmisano University,” which is housed in the training room, round out the company’s offerings.

The café, located between the training room and the deck, has a cozy lounge area with cushy leather sofas, a large screen TV and stellar views of the Mississippi River.

The architecture team created a clean, modern design that looks like it belongs in the neighborhood. Concrete, wood, steel and glass — natural elements of construction — are employed throughout the building.

“We didn’t want stone and high-end materials,” says Palmisano. “We tried to take industrial materials and blend it into an elegant design. We aren’t a fancy bunch. We wanted to use construction materials.”

Palmisano picked the location near the Market Street Power Plant in part because he wanted to be in an urban environment, close to downtown and to take advantage of river views, but also with the hope that the company could play a part in the revitalization of the area.

“Since we are community oriented, we wanted to build something that could be bigger,” says Palmisano. “ We’re hoping with our philosophy of doing good in the community that our little project creates a spark of doing something in this area.”

The use of raw materials and the building’s industrial surroundings lend a certain humility to the sophisticated design, anchoring it to the company’s origins as a local, family-owned construction business.

“A lot of time, thought and effort went into the design and creating something that captures the personality of the organization,” says Palmisano. “That’s very hard to capture in a physical space. I went through a lot of heartache and grief trying to get everything right.”

Address: 1730 Tchoupitoulas St.
Office completed: 2018
Architect: Eskew+Dumez+Ripple
Interior Designer: Eskew+Dumez+Ripple
Furnishings: AOS
Square footage: 30,000 square feet
Main goal: Expansion of offices to accommodate current company size and future growth.
Biggest Challenge: “I went through a lot of heartache and grief trying to get everything right,” says Wes Palmisano. “Creating something that captures the personality of an organization; that is very hard to capture in a physical space.”
Standout Feature: The company manifesto inscribed in wood in the lobby.