Gov. Edwards Appoints James J. Carter to Board of Commissioners of the Port of New Orleans 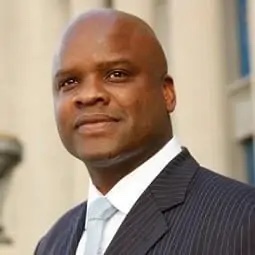 NEW ORLEANS (press release) – Attorney James J. Carter will be sworn in as a member of the Board of Commissioners of the Port of New Orleans (Port NOLA) during its Oct. 21, board meeting. Appointed by Governor John Bel Edwards, Carter succeeds Tara C. Hernandez as one of four Orleans Parish representatives on the seven-member regional board and will serve a five-year term.

“We welcome Commissioner Carter’s expertise and appreciate his demonstrated commitment to community,” said Brandy D. Christian, Port NOLA president and CEO. “His understanding of civic issues will be helpful as we move forward with infrastructure investments to increase the region’s economic prosperity. His thought leadership will certainly help strengthen our competitive advantage as a Gulf gateway.”

Port Commissioners also serve as Commissioners of the New Orleans Public Belt Railroad (NOPB) board and Carter will become NOPB’s newest commissioner with this appointment. NOPB, a Class III switching railroad, is an independent political subdivision of the state of Louisiana with the primary mission of serving the Port of New Orleans and local industries.

“I am honored to be appointed by Gov. Edwards to serve as a commissioner on the Port of New Orleans Board and can never thank God enough for my parents who gave me a solid foundation,” said Carter. “As one of the top-performing ports in the United States, the Port can be a powerful economic engine and create economic opportunities that make the state a model nationally and globally. By working toward a common goal for the benefit of our region and comprehending Port NOLA’s essential role on the world stage, we can ensure that the Port remains the vital force for needed growth and a strong future for the maritime industry.”

Carter’s career as a businessman includes establishing and operating his own law firm for more than 21 years. He is the Managing Partner of The Cochran Firm-Trials & Mass Torts and has been admitted to practice in all Louisiana state courts, all Louisiana U.S. District courts, the U.S. Fifth Circuit Court of Appeals and the U.S. Supreme Court.

Carter has been recognized by New Orleans City Business Magazine as a Leader in Law in 2012 and 2016. In 2021, along with three Supreme Court Justices, he was recognized by Law Dragon 500 for excellence in the legal profession. Also in 2021, Carter was inducted into the elite Litigation Council of America, which includes less than one half of one percent of North American lawyers, judges and scholars.

As a public servant, he was elected to and served from 2006 to 2010 on the first New Orleans City Council seated after Hurricane Katrina. Noted for his experience in understanding holistic criminal justice reform and economic development, Carter was appointed the first African American Criminal Justice Commissioner in the city’s history. As Criminal Justice Commissioner, his work laid the foundation for substantial reductions in the city’s violent crime rate.

Carter is a lecturer and adjunct professor of law. He is a Civil Trial Litigation Adjunct Professor at Howard University School of Law and sits on the Howard University’s School of Law Board of Visitors. He has also served as a Trial Advocacy Adjunct Professor at Tulane University School of Law. Carter is the immediate past chairman of the University of Louisiana System Board of Supervisors, which provides policy guidance and fiscal oversight for nine public universities in Louisiana. He is also a participant in a multi-year study of leadership in divided communities at The University of Oxford, Centre for the Resolution of Intractable Conflict. He has lectured in England, Canada, Panama, Jamaica and across the United States.

Categories: Maritime, People On The Move