COVID-19 has devastated cruising but seems to have largely spared the rest of the maritime sector. 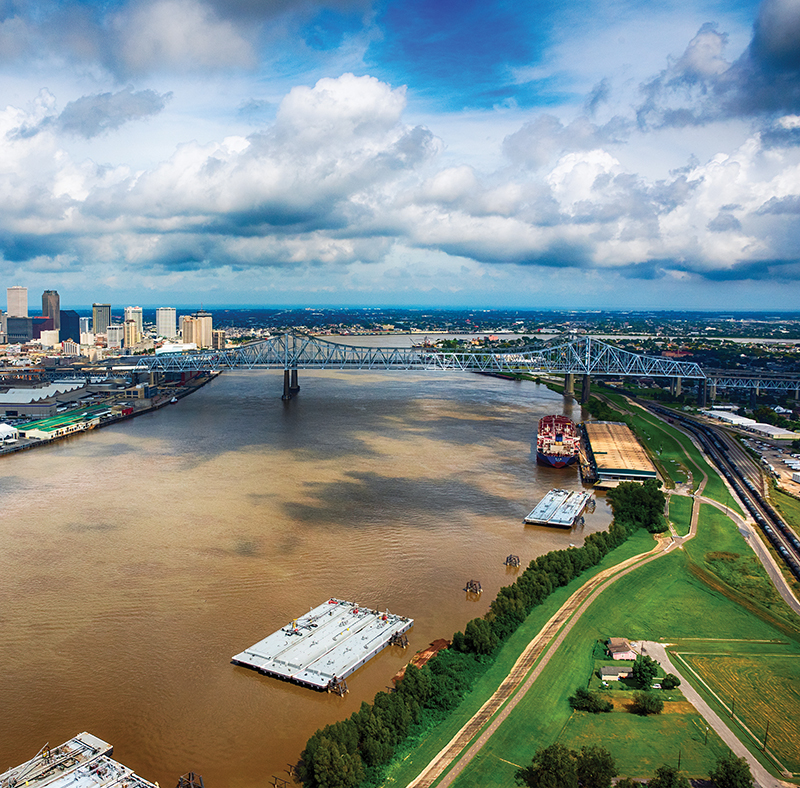 As the COVID-19 pandemic hit, everyone concerned about necessities like toilet paper or thermometers has been reminded of the critical importance of the supply chain. – Jessica Ragusa, communications manager for the Port of New Orleans

Even though the flow of tourists and conventioneers through New Orleans has slowed to a drip since the COVID-19 outbreak began, the amount of goods being transported up and down the Mississippi River has not dropped precipitously. That’s especially surprising considering several challenges the industry faced this year. It’s also really good news due to the importance of the ports to the state’s economy.

According to the Ports Association of Louisiana (PAL) port activity is responsible for $182 billion in annual economic output: direct jobs, indirect jobs plus local and state taxes. The five ports on the Lower Mississippi River — including the Port of New Orleans and the Port of South Louisiana — comprise the largest port complex in the world and move more than 500 million tons of cargo annually. Each year, more than 60% of the nation’s grain and 20% of petroleum and energy commodities are handled by Louisiana ports. It’s understandable, then, that any potential disruption from the virus would be a cause for concern within the industry.

“Almost everything that affects the economy affects the port,” said Paul Aucoin, the executive director of the Port of South Louisiana. “Earlier in the year, we were dealing with high water issues, the tariff issue and then the pandemic, so all three things did cause a slight decline in our tonnage and resulted in less vessels coming to our port and fewer barges. We still had about 50,000 barges and close to 4,000 vessels, but it’s a little less than it was the year before.”

Aucoin said the port, which stretches for 54 miles between New Orleans and Baton Rouge, expects to move about 5% to 7% less oil, petrochemicals, grain and other cargo in 2020 than in 2019.

Downriver at the Port of New Orleans, the amount of containers and break bulk cargo being moved may have dropped a similar amount, but the situation is made more dire by the cancellation of all U.S. cruises since March.

Port NOLA is the sixth-largest cruise port in the nation, handling more than 1.2 million passengers in 2019, hosting five homeported oceangoing cruise ships and boasting a fleet of inland river cruise vessels. The port’s projected passenger totals for 2020 were 1.4 million prior to the suspension of the cruise operations. The cruise revenue impact from COVID-19 from mid-March through October will be approximately $7.1 million and there will be another $3 million lost if cruises don’t resume in November and December.

That’s one reason why the port is joining others around the country to lobby for federal relief.

“At Port NOLA, as essential workers, our cargo and rail operations continued uninterrupted with the health and safety of our people a top priority,” said Jessica Ragusa, Port NOLA communications manager. “That said, the COVID-19 pandemic has had an unprecedented financial impact on ports across the globe. Expenses have increased due to COVID-19 healthcare and related protocols. Because we operate behind the floodwall, people sometimes overlook our significant role. Yet as the COVID-19 pandemic hit, everyone concerned about necessities like toilet paper or thermometers has been reminded of the critical importance of the supply chain.”

Still Rolling on the River

Many companies work in conjunction with the ports to keep cargo moving through New Orleans. The pandemic has changed day-to-day life for them as well.

At Marquette Transportation, a national marine transportation company with operations in Louisiana, the aggregate and commodities segments of its business were largely unaffected by the pandemic. The softening of the world’s oil markets, however, did cause a “significant but temporary” slowdown on the liquid side of the business.

“We’ve recently seen a measurable uptick in that sector, however, and are hopeful it will consistently increase,” said Ryan A. Peters, the company’s director of Gulf-Inland crew management. “By all accounts, it looks like we’re going to have a strong fourth quarter with grain markets picking up due to harvest and a glimmer of an increased need to transport liquid.”

Peters said Marquette did not have to lay off any of its 1,500 employees, a third of whom are in Louisiana. The company’s vessel-based employees were largely unaffected by the crisis, he said, while shore-based teams had to adapt to working from home like workers in many other industries.

“Our chief concern has been and remains the safety and wellness of our employees,” said Andrew Cooper, the company’s senior vice president. Cooper said there’s been an increase in 2020 operations expenses due to investments in thermal kiosks, PPE and sanitizing equipment. “However, we see this as the cost of doing business in the ‘new normal’ and ensuring the safety and welfare of our employees.”

Of course, nothing would be “rolling on the river” without assistance from the Mississippi River pilots.

“The pandemic has changed every aspect of our business, top to bottom,” said Capt. Michael T. D. Miller, the president of Associated Branch Pilots, whose pilots board ships several miles offshore in the Gulf of Mexico and navigate them through the Mississippi River Delta.

Miller said the pilots initially had to define their own best practices, from testing to social distancing to sanitizing. Some of those protocols were then adopted by the U.S. Coast Guard to guide the industry.

“We can’t get away from each other and still do our jobs, so we had to adjust,” said Miller. “We live remotely on relatively small stations with pilots and crew 24 hours a day, seven days a week. Pilots are also interacting multiple times a day with crews on ships from all parts of the world then coming back into the bubble on the pilot stations.”

From the River to the CourtRoom

Changes to the maritime industry aren’t relegated to the river.

Attorney Richard Martin, who specializes in admiralty and maritime law for Lamothe Law Firm, said the “new normal” for practicing law is … not for him.

“I’m 40 years out of Tulane Law School,” said Martin, who has experience as a deckhand on towboats, a roustabout worker on offshore vessels and a U.S. Navy officer on an aircraft carrier. “Before COVID-19, there were infrequent occasions when I would take a video deposition to avoid spending lots of time and money traveling to a distant U.S. city or a foreign seaport. Everything else was always in person. Now, non-contact video proceedings have become the norm for depositions, court conferences, and hearings in both federal and state courts.

So has Martin embraced the benefits of practicing law by video? The answer is a resounding no.

“Practicing law is a learned art based on in-person experiences,” he said. “Dealing face-to-face with judges, other lawyers and witnesses is critical. It’s as important as a poker player watching for an opponent’s ‘tell.’ I hope the latest crop of new lawyers doesn’t get trapped into a video practice world. Social media have made the art of personal contact almost obsolete, and learning firsthand and in person from more experienced lawyers and judges is how the art of practicing law is perfected.”