Yesterday my Facebook page blew up with friends posting photos of their fathers and sharing treasured stories of paternal love. I was not particularly close to my father, but my grandfathers hold a truly tender place in my heart.

My paternal grandfather was a humble Iowan farmer. One of my most vivid childhood memories is being nestled in his arms enveloped in his scent of WD-40 and honest sweat as he drove his Ford 9N tractor through acre after acre of elephant-eye-high corn.

My maternal grandfather had a sixth-grade education and went on to become a vice president of the Illinois Central Railroad.  After his retirement, he started his true labor of love, he bought a restaurant and hotel supply store in Mountain Home, Arkansas. He spent his retirement driving through the exquisite Ozarks Mountains stopping at resorts on the White River, Bull Shoals and Norfork Lake.

At each stop he’d drop off the supplies and take the new orders. Then he’d don his black rubber waders, get his rod and reel from the back of his station wagon, and he and the owner would fish.  I often spent my summers in Arkansas and joyously traveled the route with him. As he fished, I’d play on the shore, swim, catch minnows and bait his hook.

So… I thought for this week’s blog I’d check in on South Shore Bait and Marina. It’s located near Venitian Isle with convenient access to Lake Borgne, Lake Catherine and Lake Pontchartrain.

It’s owned by Steven Hauptmann, who has more than 14 years of experience in the wholesale live shrimp business. Hauptmann comes from a long line of fishermen — both his grandfather and father made their living fishing — and it’s just what he always wanted to do. He’s owned the bait shop and marina for five years.

“It just kind of fell in my lap and it seemed like the right thing to do,” he says.

The summers are always slow, but this year has been particularly so because of all the freshwater entering the lakes from opening the Bonne Carre Spillway.  Hauptmann trawls for his shrimp and now has to go farther out to get his weekly supply.

“It takes more time and more fuel and it’s certainly eating into our profits,” he says.

Also, though fishermen can still catch plenty of fish such as redfish, sheepshead, catfish, perch and drum, the speckled trout have all moved much farther out to escape the fresh water.

On the weekends, Hauptmann’s uncle, Carl Henry, minds the 300-square-foot store.  Yesterday, he had about 20 launchings and sold his fair share of bait.

Henry learned to fish when he was six years old.

“My grandmother always carried her Zebco rods and reels in the back of her old Rambler and we’d often pull over to drop a line in the Pascagoula River,” he says.

Henry says customers for the little marina and boat launch hail from all over.

“We get a lot of people from the Northshore and we even get people from as far away as Ponchatoula,” he says. “We have a $10 minimum and that’s 28 shrimp.”

Joe Fasullo, a financial advisor, fishes three times a week and South Shore is where he buys his bait.

“They are convenient, and Carl always takes care of you and he never tries to rip you off,” he says. “He even gives you a little extra.”

And while some business owners might deal with corporate raiders, shoplifters or sticky- fingered employees, what Carl has to keep his eye out for cunning egrets who sometimes stealthily slip into the bait room to grab a quick and easy snack. 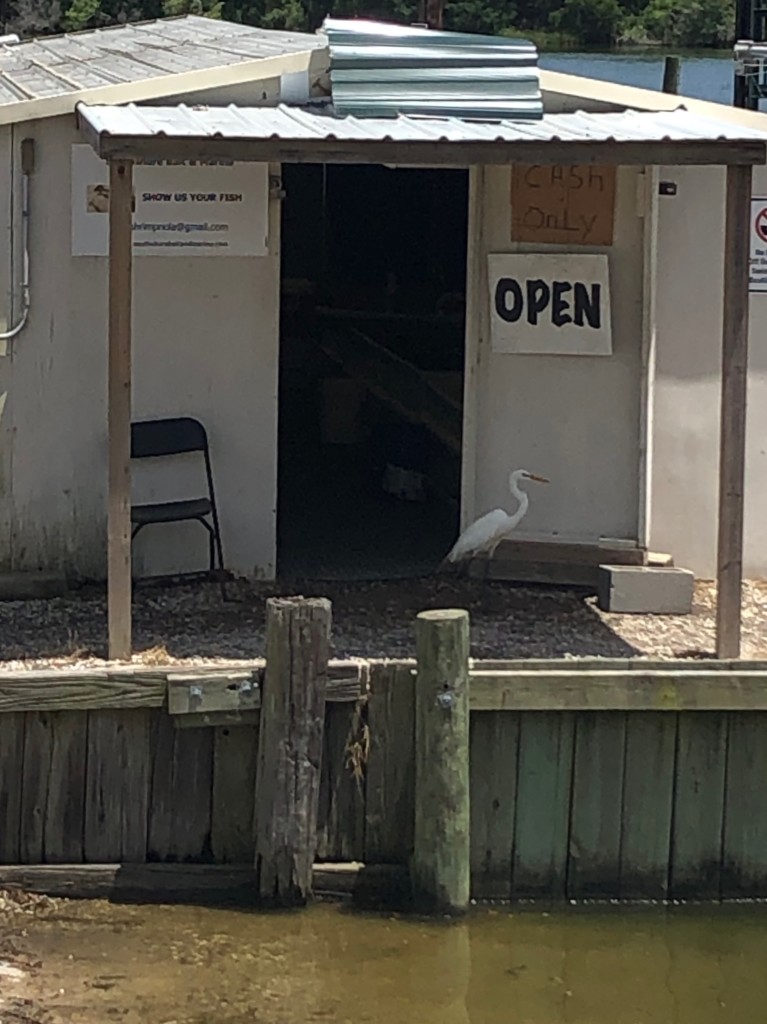