I saw a beautiful sight this week – a soccer pitch on the floor of the Mercedes-Benz Superdome. It was a literal field of dreams, if you will. There with me were my two daughters. The field’s emerald reflection in their wide-opened blue eyes is a sight I won’t long forget.

I love soccer. Fell in love with it watching the 1990 World Cup. It was the first time the U.S. Men’s National Team had made the tournament since the 1950s. The sights and sounds of host country Italy were captivating. Four years later, I was lucky enough to catch a World Cup game in Dallas in June 1994. The environment provided by the Nigerian and Bulgarian supporters that day was one I’ll never forget. This summer, my girls joined me for the first time in watching from home as we cheered the U.S. Women’s National Soccer Team in every game of their victorious 2015 Women’s World Cup.

Those that attended or tuned in probably won’t remember that the U.S. lost to rival China, 1-0, or that the defeat ended a 104-match unbeaten streak for the WNT. They likely won’t remember that the U.S. controlled possession for the vast majority of the game and tried almost to a fault to get Wambach a goal on her final night. If they do, they likely won’t recall that it was Wang Shuang, who hit a volley that deflected off U.S. defender Meghan Klingenberg, past frozen goalkeeper Hope Solo and into the right corner of the goal. It doesn’t really matter.

This game was a friendly, an international soccer term for an exhibition game. It didn’t count, other to help prepare the U.S. team for the upcoming Olympic qualifying tournament in Houston and Dallas February 10-21, 2016.

What people will remember is celebrating this team and these women for who they are and how they carry themselves as much for their accomplishments.

In an age of superficial accomplishments where image and perception count for more than intelligence and empathy, these women are worthy of the admiration they receive based on merit, not on who they’ve gone to bed with, how much skin they reveal or how much their image may be manipulated by Photoshop.

The team has been popular since winning the first Women’s World Cup in 1999. The USA’s 5-2 victory over Japan in the World Cup Final this summer averaged 25.4 million viewers and peaked at 30.9 million, making it the most-watched soccer match in U.S. history, according to Nielsen and an increase of 88% from the 2011 WWC Final (13.5 million) and up 41% from the USA-China in 1999 (18 million). The previous U.S. viewing record was 18.22 million for the USA-Portugal game during the 2014 men’s World Cup. 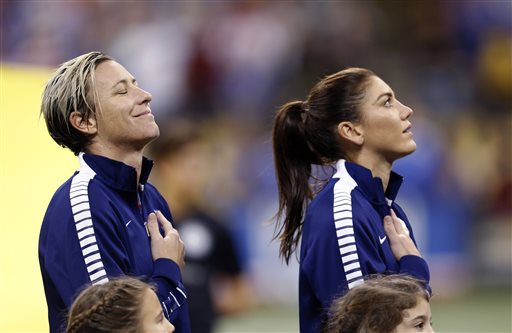 The women of this team, and of previous generations of the USWNT – Mia Hamm, Julie Foudy, Brandi Chastain, have built this team into the world’s most dominant Women’s program. Three U.S. Women’s National Team players – Carli Lloyd, Hope Solo, and Megan Rapinoe – are among the 10 players included on the shortlist for the 2015 FIFA Women’s World Player of the Year, while head coach Jill Ellis was also included on the 10-person list of finalists for the 2015 World Coach of the Year for Women’s Soccer.

In the 72nd minute, Wambach walked off of the Superdome turf to a standing ovation. She leaves the game as the world’s all-time leader in international goals – men or women, finishing her international career with 184 goals and 73 assists in 255 appearances. In a night that was about celebrating her and the USA’s third Women’s World Cup title, she humbly asked to be forgotten. Rather than looking back, she challenged the next generation of U.S. women – Alex Morgan, Julie Johnston, and Sydney Leroux – to continue American dominance over women’s international soccer.

It was a proud night. Proud of our country. Proud of our Women’s National Team. Proud of New Orleans for playing host to such an incredible event. And proud to be a dad sharing an incredible experience with my girls. I hope they’ll remember the spirit of the night, even if the details get muddled.