NEW ORLEANS – While the final numbers won’t be confirmed for several weeks, initial returns indicate the Greater New Orleans Foundation’s GiveNOLA Day generated an astounding $4,889,567 in donations for 717 nonprofits, exceeding its 2016 total of $4 million. There were 38,283 online contributions at the close of the 24-hour period.

“Raising nearly $4.9 million for our local nonprofits in a 24-hour period is a testament to the generosity of the people of Southeast Louisiana,” said Andy Kopplin, president and CEO of the Greater New Orleans Foundation. “We’re honored to be part of such a generous community that supports the causes and nonprofit organizations that make our region great.”

During the 24-hour campaign on Tuesday, May 2, people made online donations to one or more of the 717 nonprofit organizations profiled on www.GiveNOLA.org. Donations came from all 50 states and the District of Columbia and 27 countries. The full list of results (sortable by organization name, total gifts or total dollars) is listed here.

The Top 10 nonprofit organizations that collected the most were: 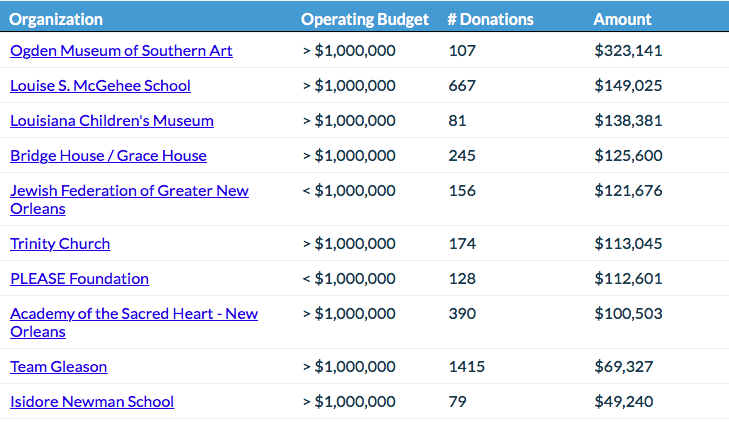 Every dollar donated on GiveNOLA Day will be stretched with additional “lagniappe” dollars provided by the Greater New Orleans Foundation and its generous GiveNOLA Day sponsors, organization reps said. The total amount in the Lagniappe Fund is $280,000. Additionally, awards and prizes totaling $120,000 will be awarded.

Part of the excitement of GiveNOLA Day was the opportunity for nonprofits to compete for cash awards. While the results are not yet final and rankings may change as reconciliation is completed, this year’s winners appear to be as follows:

*Note: Large nonprofits have operating budgets of a $1 million or more, while smaller nonprofits are those operating on less than $1 million. Results will not be finalized until reconciliation is complete.

Throw-Me-Something-Mister prizes, which rewarded nonprofits with the most unique donors within selected hours with a $3,000 prize, were awarded to Crescent City Christian Schools, Youth Run NOLA, Team Gleason, Friends of City Park, three-way tie between Academy of the Sacred Heart – New Orleans, Louisiana SPCA and WWNO, and unCommon Construction.