Give Love, Give Local

In honor of Valentine’s Day, which happens to fall this year on the heels of Carnival entertaining, Biz New Orleans takes a peek at four local companies behind some creative gift offerings. Whether you’re in search of a small hostess gift for a Mardi Gras party, or a thoughtful token for someone you love, these entrepreneurs are hoping you’ll look no farther than right next door.

Promising “you never forget your first,” Love, Cookie is the newest offering from Baker Maid a company that has been catering to New Orleans’ sweet tooth since 1953.

“We have done everything we can to make sure these are the best cookies they can be, says Greg Sorenson, the fourth generation of his family to run Baker Maid. “Everything from the vanilla extract to the toffee in the almond toffee cookies — we make that all in-house.”

From its 30,000-square-foot production space next to Breaux Brothers on Julia Street, the company crafts about 40 different bakery items completely from scratch. Originally a bakery supply house, Baker Maid used to provide products like jellies, fillings and emulsifiers to local businesses. In the 1980s, the company moved to providing its own fruitcakes to department stores.

“Soon we moved to rum cakes and cookies, and things just started picking up from there,” Sorenson says. Along with Colin Manekin and his father, Darryl Sorenson, Greg led the company in partnering with Rouses in 2010 to provide all of the grocery chain’s sheet cakes, cupcakes and petit fours. “That relationship has helped us grow a lot,” he says.

The business currently has four facets. “We still do our fruitcakes, for both grocery stores and department stores, plus we offer five types of king cakes, and then we have our commercial baking side, including Rouses. And then, of course, we have our cookies.”

Sorenson says sales of the new cookie brand have been doing well. “It’s exciting to see. We went through dozens of flavor profiles, testing batches every day for six months to whittle it down to the best ones. I’m really proud of this product.”

Love, Cookie can be found throughout the Gulf South, at grocery chains including Rouses, Robert Fresh Market, Breaux Mart, Dorignac’s, Langenstein’s and Maxwell’s. 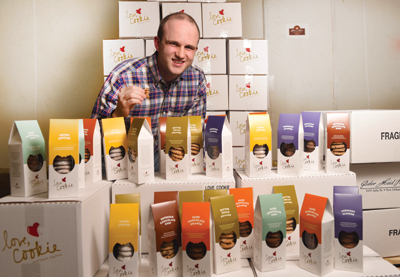 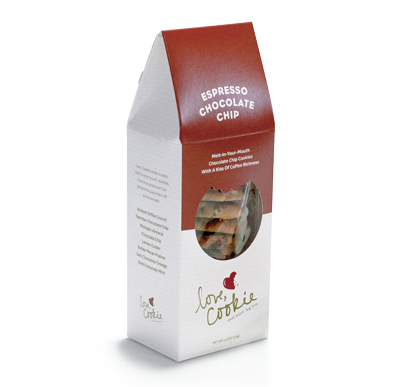 Greg Sorenson is the fourth generation of his family to run Baker Maid, makers of the new brand, Love, Cookie.  Photos by Cheryl Gerber

Sisters-in-law Julie and Allison Hoffman love to meet once a week and get their nails done together.

About a year ago, one of these regular pampering sessions spurred a business idea.

“We started talking about it one day and we couldn’t believe that New Orleans didn’t have a local line of nail polish,” says Allison Hoffman. “We seem to have lines of everything else.”

After a full day of discussion at last year’s Jazz Fest, the women were ready to move on their idea.

“We started doing our research and it really invoked the passion we have for creating a product that is as natural as you can get with nail polish. We both have little girls so it was important to us that we do a ‘5-free’ polish (free of formaldehyde, formaldehyde resin, toluene, camphor and dibutyl phthalate).” All polishes are also vegan and not tested on animals.

After some searching, the women found a manufacturer for their polish in the Southeast that could meet their demands and soon they began the fun part: designing the colors.

“It was a lot of trial and error,” Hoffman says. “We started with a good basic neutral, our Gulf Oyster. It’s turned out to be our most popular color, which was actually unexpected. Our second most popular color is our gray, which we called Pothole. People love the name: it’s definitely something they can relate to. All our names reference New Orleans in some way.”

“We didn’t sit down and make a list or anything. Our first stop was actually Two Sprouts, a kids store on Metairie Road where we both shop a lot. They really got behind us immediately. It was a catalyst for us. Through friends and social media we’re now in 19 stores in just two months, including Forever New Orleans and Fleurty Girl.

“Women of NOLA are loving Native,” Hoffman says, “because it’s made by women just as passionate as they are about our beautiful city.”
Native Nail Polish sells for $11 a bottle. All polishes come ready to gift in a stylish burlap bag. 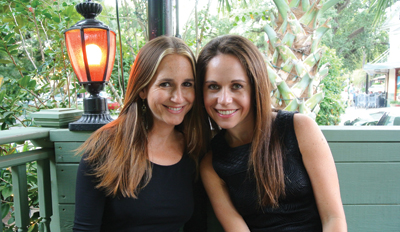 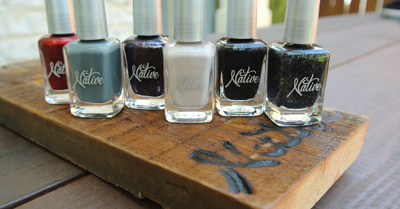 Up until last year, Sumrow’s woodworking skills were confined to New Orleans Woodworking, a local company he owns that tackles projects like restaurant build-outs, as well as cabinetry tables and furnishings for commercial and residential clients.

“One day in the fall of 2014, Daren was asked by a friend to make a cutting board for a wedding,” explains Sumrow’s wife, and now business partner, Mandy Simpson. “The finished product was so beautiful that I put some pictures up on social media and we were both amazed at the response.”

Not long after, Nola Boards was born. The company blends Sumrow’s woodworking talents with Simpson’s skills in marketing, design and photography.

“The business has exploded, it feels like overnight,” Simpson says. “We’re just a year old now and we’re frantically looking for retail space so we can expand.”

“Rachael Ray found us somehow and did a full-page article about us in her holiday gift guide,” she says. “That was really incredible.”

Materials range from the delicate green tones of the Louisiana sinker cypress in the company’s most popular board — the Atchafalaya — to blends including cherry, maple and walnut, as seen in the Trinity, the Marigny Triangle and the WILD CHOP-itoulas.

“We’re seeing these boards become a centerpiece of people’s kitchens,” Simpson says. “I have to admit that half the time I don’t want them to leave the house.”

While most of Nola Boards sales are made online, a few retailers carry some products, including The New Orleans Historic Collection gift shop, Merchant and Coutelier.

“This is very much a culinary town,” she says. “And we are always open to suggestions.” 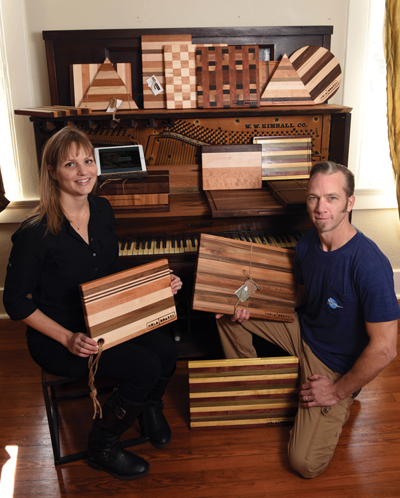 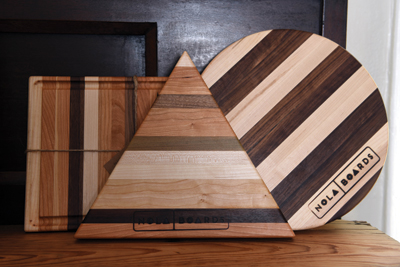 Looking for a truly unique way memorialize a moment in time? A desktop decoration that’s bound to get noticed? New Orleanians Charles Carriere and Cole Wiley have introduced their own spin on 3-D printing with the Scandy 1.0 app and Scandy Sphere.

“With the free Scandy app, for the first time users will be able to create 3-D content through their mobile devices,” says Carriere. “Up until now you’ve had to either purchase a very high-end scanner or use a sophisticated CAD program.”

With Scandy 1.0, iPhone users can take 3D scans from their phone and order Scandy Spheres — actual spheres featuring a 360-degree panorama. Users can either capture their own panorama with the app, upload one they’ve already taken, or choose from existing pre-selected Scandy Favorites.

“I had the idea for Scandy 3-D spherical-panoramas while laying in bed staring at the room reflected in a brass bed knob,” says Carriere.

The Scandy 1.0 app also allows users to share the panoramic images they’ve created on social media. It is expected to be released for Android users later this year.

Always wanted an action-figure-sized version of yourself or a loved one? Scandy can help with that as well. Last March the company launched Scandy 0.1, which allows anyone with an iPad to scan in 3-D with the purchase of an Occipital Sensor. Users can then order 3-D prints of the object through Scandy.

Launched in late 2014, Scandy held a Kickstarter campaign last November that reached its goal of $25,000.
“Every time we hand a Scandy Sphere to someone who’s never seen one before, they’re really blown away,” says Wiley. “Right now the focus is just on getting the word out, putting it in people’s hands,” Wiley says. “It’s all about figuring out that one perfect pic to show. We’re still fine-tuning the method.” 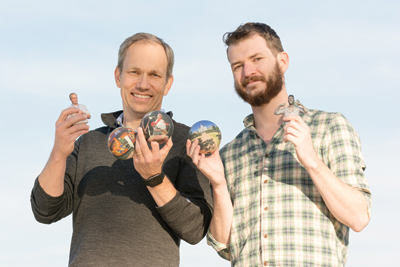 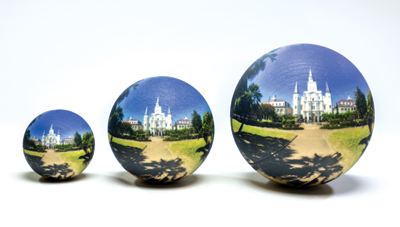 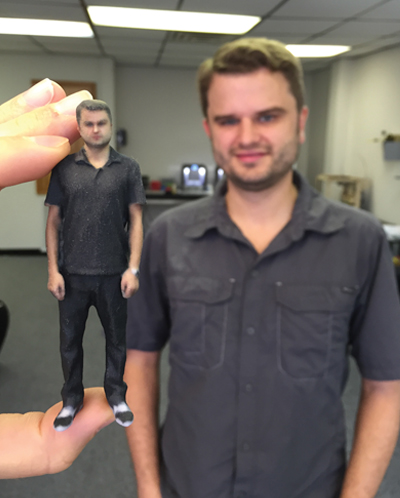