Get Your Head in the Game

VR Arcade NOLA is the first to bring virtual reality to the region.

From Los Angeles to New York City, virtual reality (VR) arcades have been sprouting up around the country in the past year. Illinois got its first in the city of Normal last July; the first to hit the East Coast opened in Washington, D.C., just a month later; and Minneapolis just debuted a 40,000-square-foot virtual arcade at the Mall of America in December.

Drawing everyone from the hardcore gamer to those just curious what it would be like to move around in a virtual universe more reminiscent of the holodeck on “Star Trek”, the American trend follows a virtual reality explosion in China, which, according to a December article in Forbes, now plays host to more than 3,000 VR internet cafes.

While companies like Facebook, Google, Samsung, Sony and Microsoft have already invested millions rolling out personal VR options — ranging from the $15 Google Cardboard to the $399 PlayStation VR — another big player in the industry, HTC, announced last fall that its Viveport Arcade program would begin opening arcade locations in the United States and Europe with the goal of turning public virtual reality gaming into a $100 million industry within the next two years.

Lima, Ohio, even boasts its own VR arcade, but none can currently be found in the Southeast — a fact New Orleans residents David Denny and Devin Regan were shocked to discover after both tried the experience on a trip to Brooklyn this past September.

Maryland natives Denny and Regan came to New Orleans in 2010 to help with the BP oil spill cleanup, fell in love with the city and decided to stay. When they participated in the VR demo, Denny was working in the solar industry and Regan was working in construction.

“As soon as we experienced it, we immediately had a ton of questions,” says Denny. “We found out there was nothing like that here and we had been wanting to start our own business so we took the leap.”

Using their savings, the two purchased the same system they had tried — the HTC VIVE.

“This is currently the best, highest-end, most realistic system on the market,” Denny says. “It’s the only one right now that allows you to move around in a virtual space. With everything else you have to be seated.”

Priced at $799, the system includes a headset, two wireless motion controllers, and two laser-emitting boxes that define the space where a user can exist in virtual reality — between 6 feet, 6 inches, by 5 feet and up to 16 feet diagonally. The system also requires a powerful PC with certain specifications.

Both add up to a costly barrier to entry, which is where VR Arcade NOLA steps in.

“We knew that if people could just try it, like we did, they would love it,” Denny says. “So we’ve created an easy, inexpensive way to do that.”

Denny and Regan purchased their first system in November and began offering it to the public on Dec. 1 by booking birthday parties, corporate events and conventions.

“Our first booking was at the Tchoup Yard,” says Denny. “One of our friends is a manager there so we worked out a deal to go out there on the weekends and offer people the chance to play for $1 a minute.” 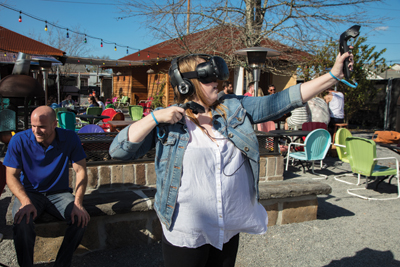 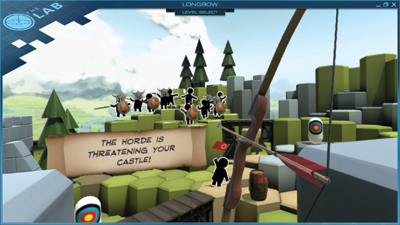 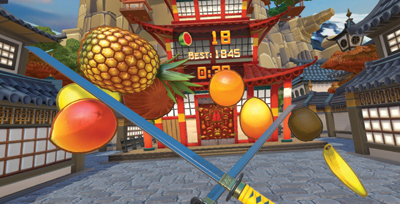 VR Arcade NOLA currently offers 15-20 different experiences/games. For around $1 a minute, players can immerse themselves in popular games like Fruit Ninja and Minecraft, try their hand at archery or 3D painting, or travel anywhere from the depths of the ocean to the French Quarter.

Regan says the relationship has been a win-win for the bar and the startup. “People hear about it and come to the Tchoup Yard to check it out, so we’re bringing in customers for them, and then people who are already there are seeing us and trying it, which gives us exposure.” Unless otherwise booked, VR Arcade NOLA can still be found at the Tchoup Yard on weekends running two of the four systems they now own.

The company currently offers between 15 and 20 different experiences — ranging from the opportunity to go eye-to-eye with a blue whale in the depths of the ocean, to create your own life-size 3-D artwork, to protect the Millenium Falcon from Stormtroopers, kill zombies or even run your own convenience store.

“There are more than 100 different game options right now and more are constantly being added,” Denny says. “We’re always trying out new ones.”

VR Arcade NOLA’s only requirements are some available space and an electrical outlet. “We’ve set up outdoors, in hotel lobbies, at Mardi Gras World and in living rooms,” says Denny. “It’s such a great idea for parties. I mean, you could go get a photo booth or a DJ like everyone else does or you can go for something really unique and interactive.”

In addition to operating regularly from the Tchoup Yard, VR Arcade NOLA is also partnering with NOLA Motorsports Park to offer VR between races.

Neither Denny nor Regan considers themselves gamers, and neither have a tech background, but both have experience in sales, which they say helps them provide a positive customer service experience in addition to a virtual experience that can be, quite literally, out of this world.

Since the beginning of the company — only three months ago — the goal has been the same: to eventually secure a permanent home. “We’d love to open an actual arcade and make this available to people whenever they want,” Denny says. “We’ve just been accepted into New Orleans Entrepreneur Week’s Big Idea competition, so that’s exciting. A win there could help make that happen.”

Supporters can vote for the startup online at Nola.com from March 6-13. The top 10 finalists will then pitch their ideas to the crowd for voting Friday, March 24 from 4-9 p.m. at the Contemporary Arts Center.

As of last summer, the industry included more than 200,000 developers and at least 700 startups worldwide, with no hint of slowing down.

Not Just Fun and Games

Virtual reality is not just for shooting down aliens in an alternate universe. The technology is currently being used or evaluated in almost every industry, including:

Shop at virtual stores; and

Travel the world (and into space).

Go beyond the magazine with this Biz New Orleans exclusive video here.