Nobody enjoys stopping for gas, so this new startup is bringing it to you, wherever you are. 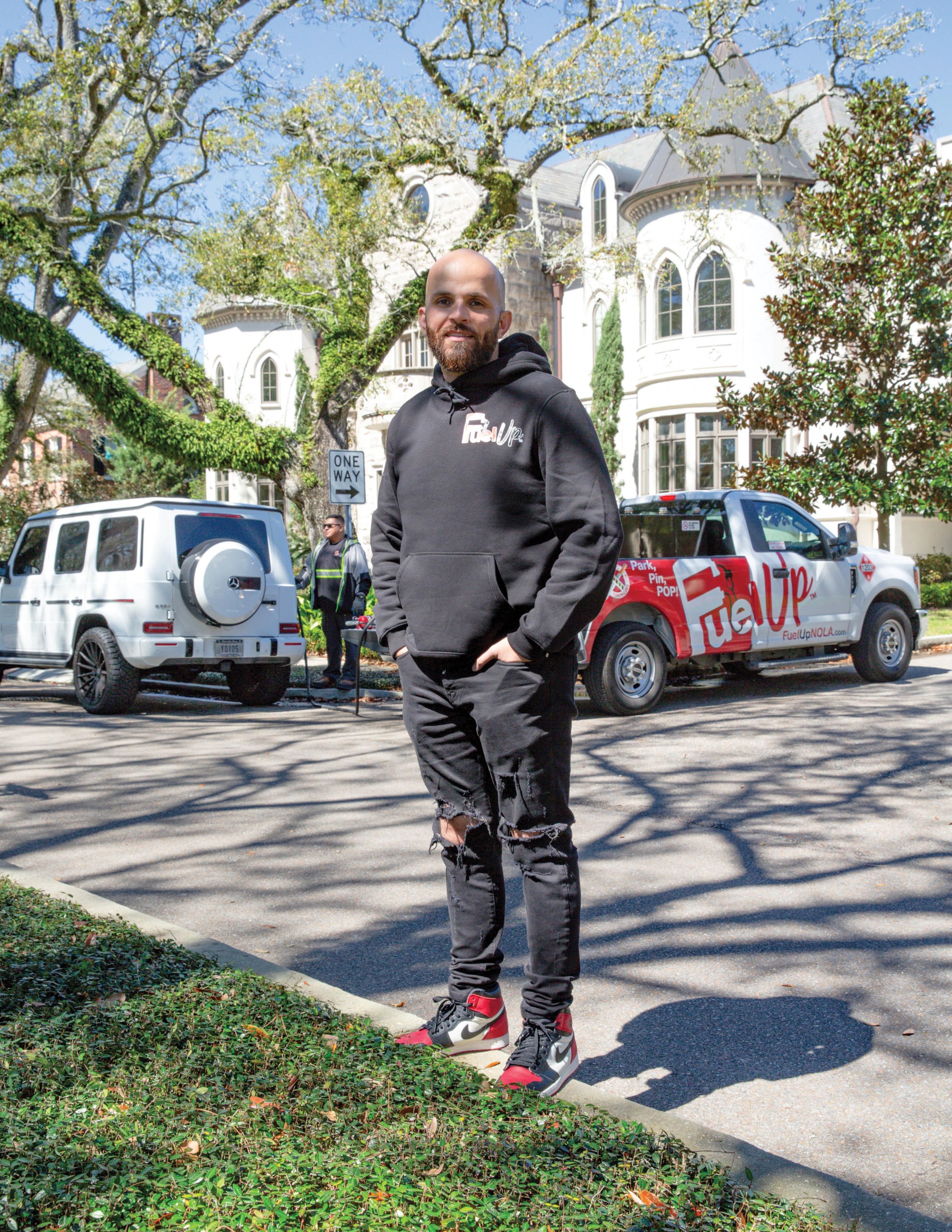 Fuel Up NOLA owner Yoyo Nabut launched the company this past January with the goal of providing a safe, convenient and efficient way to gas up a vehicle. Members use the app to let technicians know they are parked and ready for fuel at their home, office, gym, or any other location.

Dirty Job
According to Car and Driver, a 2011 Kimberly-Clark study reported that “71% of gas pump handles were considered ‘highly contaminated with the kinds of germs most associated with a high risk of illness.’ Compare that to only 41% of ATM buttons and 43% of escalator rails.”

Pumping gas is one chore no automobile driver can avoid. For many, add in an extra layer of risk at the pump right now, or the physical inability to get the job done, and it can be much more than just a taxing errand.

That’s where Fuel Up NOLA, launched in January of this year, aims to step in, making gassing up and maintaining your or your loved one’s vehicle easy, convenient and safe.

The brainchild of owner Yoyo Nabut, who also owns multiple Birdies Fuel stations across the Gulf South, the inspiration for Fuel Up NOLA came from a place close to home.

“I’ve been in the fuel business for years and knowing how the gas stations work had me concerned for my own mom and my sister,” he said. “I’d hate to have to stay on the phone with my mom while she pumped gas to make sure she was safe. My sister has two little girls, and she didn’t feel safe stopping to get gas. So, it was really out of family concerns that gave me the idea.”

Additionally, Nabut drew inspiration from other straight-to-the-customer delivery apps that have become a part of everyday life for people.

“There was a need for evolution in a business that has remained fairly stagnant for decades. Amazon, Waitr, UberEats have ushered in a new wave — everything can be delivered to your doorstep, why not fuel?” Nabut said. “I thought that if this was a good idea for me and my family, maybe other people would think it was a good idea, too.”

Nabut is on the cutting edge, with gas delivery companies becoming a new trend that is slowly spreading across the U.S. Companies such as Yoshi, Booster Fuels, Filld and Urgent.ly have started to transform how drivers fuel up in states such as California, Florida, Tennessee, Texas and more, with the biggest reason for many who have signed up being convenience and ease.

Prior to launch, the biggest challenge for Nabut and his team was putting together the nuts and bolts, and proper infrastructure, a process that was three years in the making.

“Starting from scratch was a long process to get the custom DOT-approved fueling skids, to the final approval of the application from Apple and Google Play Stores,” he said.

Fuel Up NOLA, which has its headquarters in Luling, services a 50-mile radius around the city of New Orleans, including Belle Terre Road in LaPlace, New Orleans East to the Twin Spans, Chalmette, Metairie, Uptown, Downtown, Belle Chasse, West Bank, River Parishes and Des Allemands. The company has an expanding fleet of fuel trucks and a growing roster of employees and is hoping to expand services to the Northshore by the end of the summer.

“We currently have five trucks,” said Nabut. “Three are in full-time operation. One truck is used as a refill, and other trucks are in the field. We are hoping our diesel fuel truck will be completed by the end of March or early April 2021. There are currently four drivers and a total of seven employees on our team. We are looking to expand to have 10 trucks on the road by 2022.”

A membership to Fuel Up NOLA is $19.99 per month, plus the cost of the fuel for a vehicle, or a family of up to four vehicles, and includes a free tire pressure check and refill with each visit. You can also order a one-time delivery for a fee of $4.99, plus the cost of gas. Team members can be scheduled to go to a home, gym, parking garage or office weekly, and members receive priority service “during peak periods, gas shortages or adverse weather conditions,” according to the website. The company is currently offering the first month of a new membership free, with customers just paying for the price of the fuel. The Fuel Up NOLA app notifies members when a driver is en route, for safe, contactless interaction.

Nabut hears many reasons why customers have chosen to become members, citing safety concerns as well as the convenience factor.

“This service is perfect for everyone. Our customer base starts from the worried parent with the 17-year-old son or daughter, the elderly person that cannot stand for extended periods of time, the working mom and dads, or the busy businessman or -woman,” Nabut said. “We all have loved ones in our lives that we are concerned about. They work late hours and safety is always a concern. I didn’t want them stopping for gas at night, and now with this pandemic, I definitely didn’t want them stopping for gas and risk coming in contact with someone or something that has been exposed to the virus. Admittedly, we all live very busy lives rushing from one event to another, and we are all on edge. The last thing we want to do is stop and pump gas. Finally, seeing the rash of crimes, theft, and now murder happening around New Orleans area gas stations, it has become the best way to protect yourself and your family from any harm.”

So far, feedback has been overwhelmingly positive, according to Nabut, who feels that once members give it a try, they will overcome the habit of going to the pump.

“Like with anything, we have to grow as an industry. This is the next way of doing things,” he said. “I’ve had calls from customers that say they are customer for life. You feel good about it.”